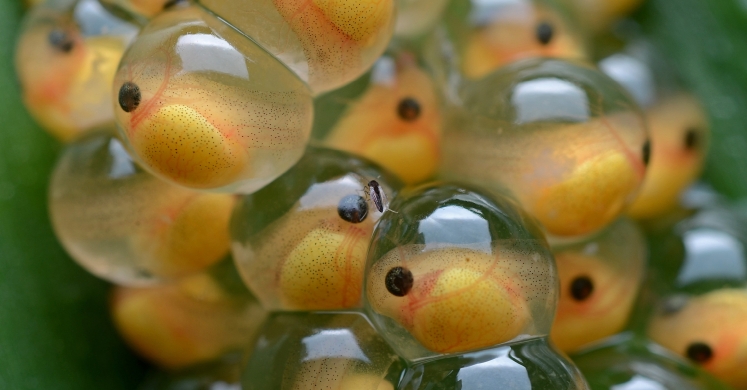 Summer is officially in full swing, and it’s the perfect time to pay homage to our “slimy” residents of the season—amphibians! By their very nature, amphibians are an intriguing class of animals that are defined and categorized by their typical life cycle, which includes a phase of life spent in the water and another on land. To celebrate our amphibian friends, we are going to spend a few weeks learning about their life cycles, a fascinatingly complex process. This week, we are starting with frogs; let’s see how they grow! (Note, I’m going to be introducing more jargon than usual in this post, but we will be using many of these terms again next week and the week after. We will have plenty of time to revisit these concepts to help them stick.)

The developmental journey of a little frog begins with external fertilization for the majority of species– a male frog clasps onto a female frog until she releases eggs into the water. Males then release their sperm into the water to fertilize the eggs. Beyond this point, parental care varies widely across species. Some frogs deposit the eggs in the water and never see them again, other species may build structures to protect the eggs, and some species even carry the eggs around in a brood pouch on their backs!

Whether the parents care for the eggs or not, the next step of the developmental pathway for the fertilized eggs (also called zygotes) is cell division. A zygote will begin dividing into smaller cells, and those cells will divide into even more cells, through a carefully regulated process that eventually allows the egg to form what is a called a blastula, a hollow ball of cells. This cell division continues into a gastrula – the hollow ball now has three distinct layers of cells that now has an opening that will later become the exit of the digestive system (anus). 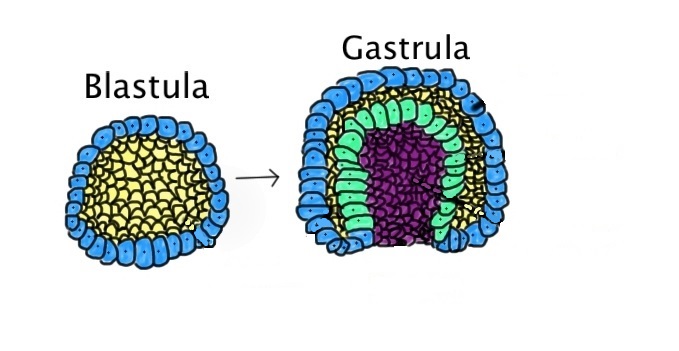 After this point, those layers of cells will form different body systems, like the nervous system or the muscles and vascular system. You can watch this process happen in the video of a poison dart frog below:

After the gastrula stage, the embryo starts to develop the precursor to what will become the spinal cord, and the tail bud (remember those little tadpole tails!). Eventually, as the tail grows, we can see what we would recognize as the tadpole phase. This is a completely aquatic stage of life for frogs. Their bodies are streamlined for swimming and they have external gills to live underwater (visible on the video at the end.)

We have now reached a familiar stage – frog metamorphosis. Before becoming an adult, the frog’s body will need to change from a fish-like state to a body that is capable of living on land. Their lungs will finish developing, eliminating the need for external gills; their limbs will finish growing; and, a part that fascinates me: they lose their tails. As the juvenile starts becoming most frog-like, the cells in the tail begin to undergo a complicated hormone-directed process of apoptosis (programmed cell death) to break down the tail. This transition from tadpole to adult frog is another important example of variation in nature – it can take as little as a week or as much as two years, depending on the species!

You can watch the complete development cycle over time lapse video below (note, this is a Canadian wetland education organization, and their particular rules/regulations of collecting frog eggs are most likely different than ours. Always be mindful of state laws involving wildlife.)

How is amazing is that? Something as seemingly simple as a frog has quite a complicated growing-up process. I should mention, though, that I generalized this process. There is a fair bit of variation if we compare among species, and there are a few species of frogs that skip the tadpole stage altogether and hatch from their eggs as tiny froglets! It’s just another sign of how wondrous nature is in its diversity.

Connecting the Outdoors Tip: If you do spot any egg masses or tadpoles,, and you can take a picture without disturbing the critters, be sure to upload your picture to iNaturalist! However, it's always best to leave wildlife alone.

Yay!!! Frogs are my favorite!!! Thanks for all of the great info!

Thank you for reading, Lori!