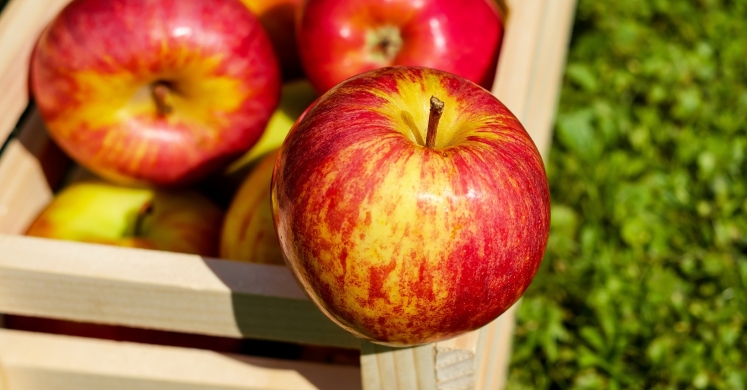 As the summer days turn ever-so-slightly cooler and perceptibly shorter, there is one activity that many think of with joy — apple picking! An autumn season just wouldn’t be the same without apple cider, apple dumplings, and any other delicious snack that can be made with apples. Have you ever wondered where our delightful fruity treat comes from, though? And was it always so delicious? If an apple was a superhero, let’s see how it got its powers…

Our modern apple trees, members of the rose family, were probably derived from a wild fruit in Kazakhstan, the Malus sieversii. The exact timing of cultivation is unknown, but the oldest known apple variety is roughly four thousand years old and cultivated apples eventually spread around parts of Asia and Europe during the ages of ancient Greeks and, later, the Romans. During its travels across the hemisphere, this Kazakh apple was likely crossed with a European crabapple and possible other species throughout the early cultivation process.

The resulting apple of earlier centuries and even earlier decades, however, did not have the crisp, sweet taste of our apples today. Because of their harsher taste and texture, they were more often used in ciders and other beverages, rather than enjoyed as a food item.  Even until the 1980s, supermarket varieties of apples were limited, and the options were often mealy and bland — until apple breeders took up the quest for a more exciting fruit, resulting in deliciousness like Honeycrisps, Jonagolds, and Kanzi (personal favorites). And today, thanks to the unusually high genetic diversity of apples, there are apple varieties to suit every taste palate and climate.

In fact, apples are so genetically diverse, that it has impacted the ways the trees are managed agriculturally. For every gene, apples have so many possible combinations of gene variants (called alleles), that it’s a risky gamble to assume that harvesting seeds from a given fruit will lead to more of the same. To think of it another way, if you were to keep and plant the seeds of an apple that you enjoyed, there is no guarantee the tree you plant would ultimately produce fruit that tasted like your original apple — the adult tree would need to be cross-pollinated, and there are many possible combinations of alleles for every apple gene. Thus, one of the best ways for orchard managers to reproduce a specific fruit is through a process called grafting. Much like a medical “graft,” apple tree grafting involves taking a cut of a budding stem and attaching it into a notch in the stem or branch of a larger tree — something like a branch “transplant.” There are a number of ways to secure the newly added branches to a tree with special grafting compounds or wraps, and the new branch eventually produces its particular fruit. Thus, it is entirely possible for a larger tree with multiple grafts to produce multiple kinds of apples!

Well, with a complicated history and even more complicated propagation methods, what appears to be a simple apple is really not quite so simple at all — it was a lot of work. But all that work has made for quite a delicious taste of fall!

Connecting to the Outdoors Tip: A number of orchards around Pittsburgh offer apple-picking as great way to both get outdoors and enjoy a healthy snack. And if thinking about apples has you hungry, check out our fall line-up of cooking classes to you in a cozy, autumn cooking mood!

The domestication and evolutionary ecology of apples

National Geographic: The History of the “Forbidden” Fruit

Harris et al 2002: Genetic Clues to the Origin of the Apple

Jackson 2003: Biology of Apple and Pears

Picking apple’s, a great family activity, and memories you will never forget.