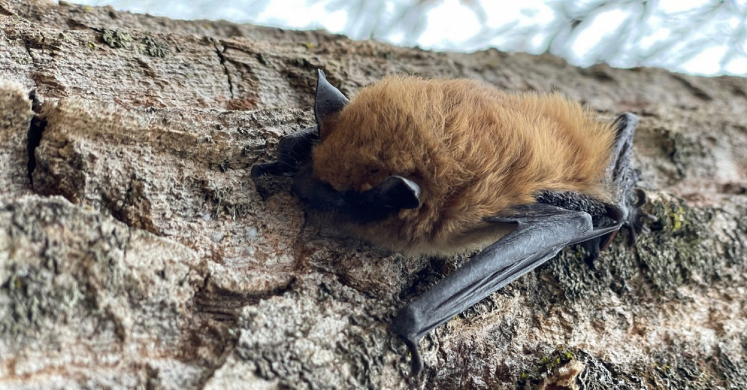 Bats are just the best, aren’t they? They have cute little faces, many species eat mosquitoes, some serve as pollinators, some help disperse seeds, and they earn extra cool points for being the only group of mammals that can truly fly — is it possible to love them any more? Well, if you also love trees, then yes!  Bats just got even cooler in my book. An upcoming study reveals that bats’ insectivorous diet is good for more than just keeping populations of blood-sucking arthropods in check — they also help forest health by managing the insects that would otherwise defoliate young trees. An upcoming study from researchers at the University of Illinois and Indiana State University looks at this relationship in more detail — let’s see what they found!

Over the course of three years, researchers Dr. Elizabeth Beilke and Dr. Joy O'Keefe established 20 different study sites within Yellowwood State Forest in Indiana. Each site included two defined plots of land, one of which was netted to keep out bats and one that was unnetted. This would allow them to compare parcels of forest that were as similar as possible, so the only difference would be the presence or absence of bats. To net the bat-excluded area, the team built frames that were 6 meters x 6 meters x 7 meters, and added netting to the frames. To make sure they didn’t accidentally measure the impact of bird insectivores, the nets were opened during the day so that birds had equal access to the netted and unnetted portions of each study site; the nets were then closed at night to keep bats out. The study sites were monitored from May until August of each year during the study, and the researchers then compared defoliation between trees in the study sites. What they found was that defoliation of young trees was much higher for the trees that bats couldn’t access — meaning, without bats to manage insect populations, young trees were vulnerable to excess herbivory!

The take-home message of this study is that bats play a critical role in forest health! They keep populations of insects in check that would otherwise eat too many leaves off of young trees (and without leaves, the trees can’t photosynthesize). We mention this often here on the #bioPGH blog, but it’s an important reminder that nature is interconnected — nothing exists in a vacuum. What happens on land impacts the skies, what happens in the sky impacts our water, what happens in our water impacts the land…and every possible combination of those elements that we can think of. And likewise, no single person, no single species, no single place exists without making an impact on those around it.

And speaking of impact, I had the opportunity to connect with one of the authors of this study, Dr. Elizabeth Beilke. It’s always a pleasure to learn from scientists!

What something that surprised you during the study?
I was surprised by how strongly oaks were affected by bat exclusion; on average, oak defoliation was nine times higher in bat-excluded plots than in non-netted plots. This is likely related to the fact that oaks are known to host a huge variety of native insects. Our work reveals a strong relationship between bats and oaks; oaks support native insects and bats consume those insects, thus reducing oak defoliation.

What would you like more folks to know about bats?
Globally, bats play critical roles in pollination, seed dispersal, and insect suppression. Some of the plants we love, like bananas, cocoa, and mangoes, are pollinated almost exclusively by bats and might not even exist today without bats. So, in my mind, having a reverence for plants is synonymous with having a reverence for bats, and vice versa.

Do you have any favorite bat fun facts?
This is about one of my favorite bat-plant interactions. There's a bat that lives in Southeast Asia, Hardwicke's woolly bat (Kerivoula hardwickii), that sometimes roosts on the inside of a particular type of carnivorous pitcher plant, Nepenthes hemsleyana. It's a mutualistic relationship, wherein the pitcher plant provides the bat with a safe roosting space in exchange for the bat's nitrogen-rich droppings. And, interestingly, the pitchers exhibit several characteristics that make them ideal roosts. For example, they house less digestive fluid than other types of pitchers and are narrower at the base than at the top of the pitcher (so the bat can easily climb in and out). How amazing is that?