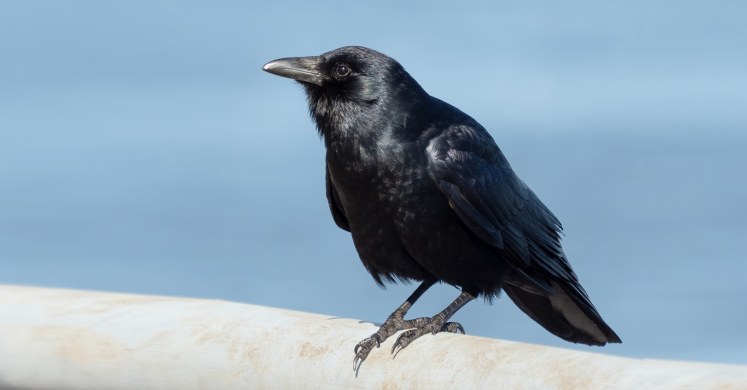 #bioPGH Blog: There’s Something Fishy About that Crow

Last week, my husband and I were walking our puppies early one morning when the sound of crows made us both stop in our tracks and look up. Those weren’t just American crows! We watched them fly overhead and listened for this sound:

But instead we heard this sound (scroll to 50 second mark):

Fish crows (Corvus ossifragus) are a distinct species of crow found near coasts and major rivers in eastern US. Here in the Pittsburgh area, you can find them nesting in a few different spots, like around Duck Hollow and Oakland (local birder and blogger Kate St. John even spotted 33 fish crows around the CMNH on August 9!)

Nearly identical in appearance to American crows, fish crows are only slightly smaller than their more widespread counterparts; and they share a number of life history traits and behaviors. For starters: neither species of crow is a picky eater. Besides feasting on berries, insects, mice, carrion, bird eggs and nestlings, and other such wild diet items, both species will also explore the delicacies found in dumpsters and at your curb before the garbage has been picked up (side note: please always use a trash can to prevent wildlife from ripping into the bags and creating a mess.) Both species are still incredibly intelligent, and they are noted problem solvers.

Where fish crows differ, however, is that they are considered “coastal specialists,” as opposed generalists like American crows. While both will take advantage of a variety of available foods and nesting sites, fish crows are able to make use of resources that American crows don’t. Back in 2003, a study specifically compared a coastal area where fish crows and American crows overlapped and compared how the two species used their available resources. Fish crows tended to roost and nest mostly in natural areas and as close to water sources as possible, whereas American crows were more likely to opt for sites near dumpsters and other human-built structures. Fish crows also have an additional diet preference for fish, crustaceans, and other diet items found in rivers, estuaries, and along coasts. In the video below, you can see a group of fish crows foraging on a beach!

So why do we have fish crows in here in Western Pennsylvania, since we’re not particularly close to a coast? Fish crows can be found inland along major rivers. Since we have a confluence defining our downtown, I’d say those fish crows have access to a major river or two!

Connecting to the Outdoors Tip: There is a nesting/roosting site for fish crows in Homestead that is visible from Duck Hollow. Look towards the Homestead Grays Bridge and listen for their distinctive calls.

Lauro and Tanacredi 2003: Habitat Use of Sympatrically Nesting Fish Crows and American Crows