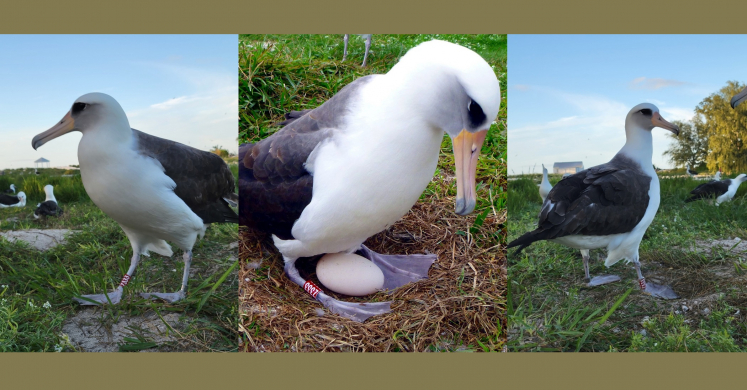 #bioPGH Blog: Wisdom is Back!

She’s at least 71 years old, has raised at least 36 chicks in her lifetime, and as of Thanksgiving Day, she has returned to the Midway Atoll nesting grounds in the Pacific Ocean. We humans may think we’re tough, but this Laysan albatross has us all beat! Nicknamed Wisdom, this particular bird is notable because she was first banded all the way back in 1956 when she was approximately five years old, and researchers have been able to monitor her family life ever since. Wisdom is an awesome bird to learn about, but we may wonder what a bird in the Pacific has to do with us here in Pittsburgh (since this is generally a nature focused on Western Pennsylvania). Well let’s find out!

First things first, Wisdom, aka Z333 according to her band number, is a Laysan albatross, also known as a mōlī. Like other albatrosses, they can ride wind over the ocean for hundreds of miles while hardly expending any energy to flap their wings. During non-breeding times, the birds can be found anywhere in the northern Pacific, from the coast of Central America to Alaska or the coast of Japan up to the Bering Strait. During the breeding season, though, from roughly November until June, nearly all Layan albatrosses return to the Midway Atoll and scattered Hawaiian islands to lay their eggs and raise their young. Each nest typically raises one chick, and the parents care for the chicks for around six months. Since this is an incredible investment, most Laysan albatross are monogamous to help successfully rear the chicks. (Intriguingly, on the island of Oahu, the male: female ratio is a bit skewed, resulting in 31% of nesting pairs being female-female.)

We may have to wait with bated breath for any future chicks from Wisdom, though — Wisdom’s mate Akeakamai has not been spotted this season yet, even though males generally return earlier than the females…and sadly, he was not seen last year either. Wisdom did not lay any eggs last year, and she has not yet this year either, even though most other individuals on the islands have already. She appears to be in the good health, though, so we will just have to keep watching.

If we take a step back, though, learning about Wisdom is indeed fascinating, but how does she relate to Western Pennsylvania? Well, broadly speaking, animals like Wisdom are important for wildlife in general, not just their own species in their own locales, for a few different reasons. First, they highlight the importance of research and monitoring. Wisdom has been banded for 66 years, and she is rewriting her species’ life history books as we speak! How long could her species keep reproducing? How long can they live? She is helping to answer these questions and more, plus she is showing how valuable monitoring can be for any species. This gives important justification for wildlife monitoring in general.  Second, Wisdom’s apparent longevity is an important reminder to all of us that decisions we make today can impact the wild world for decades to come. Wisdom has likely encountered the issue of plastics in the ocean as she searches for her species typical diets of fish, squid, and octopus; and we in Pennsylvania absolutely play a role in marine health since our famed “Three Rivers” and whatever we put in them, drain into an ocean.

But most importantly, Wisdom relates to us in Pennsylvania because all of the natural world is connected in some way or other. The connection may be direct or a few steps away, but over the long term, all of the wild world is connected. Air and water pollution travel; our demand on the fishing industry leads to unsustainable practices; our inaction on climate change impacts the world over. But on the flipside, we have also have the power to work together for good! We can regeneratively coexist with the wild world when we make thoughtful decisions and combine forces, like with the massive success of the management of the ozone layer or the recovery of our national bird, the bald eagle. Wisdom and her decades of long-distance migrations remind that us no one person is an island, no one lives in a vacuum. We are all connected over distance and time.

So let’s hear it for Wisdom!

Connecting to the Outdoors Tip: You needn't travel to the far islands of Hawaii to join in omse meaningful bird watching! The Audubon Society's annual Christmas Bird Counts are starting this weekend, and it's the perfect kind of community science to get you in a holiday mood!