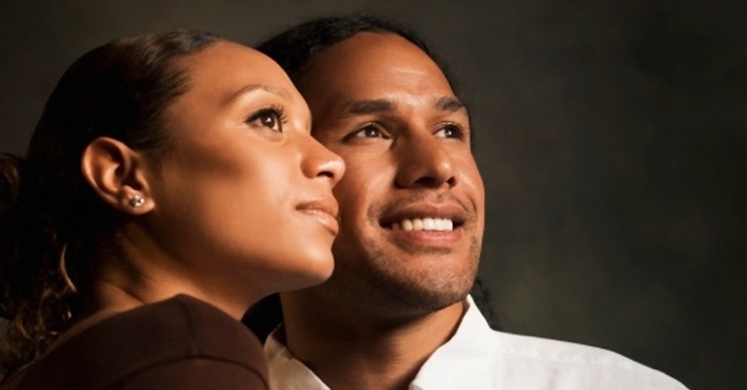 Troy and Theodora Polamalu: A Q & A about Tackling Childhood Obesity

“Dinner’s almost ready!” Those three words used to ring out in homes across America at supper time, prompting families to gather together for a home-cooked evening meal. Now, dinner is often consumed in front of the TV, or out of boxes or fast food containers, as the pace of life has quickened, contributing greatly to the nationwide childhood obesity epidemic. This issue is close to the hearts of Troy and Theodora Polamalu, who recently took the time to speak with Let’s Move Pittsburgh from their home in California. And it was with those three words: “Dinner’s almost ready!” that Theodora quieted her children as we began our conversation about the importance of healthy foods and physical activity in kids' lives.

LMP: When did you first start thinking about the foods you were eating and how they impacted your health?

Troy: I never really thought about what I was putting into my body until I started getting serious about sports. I was a fast food baby, a candy eating baby. My first four teeth were black. I was actually in the fourth grade before I enjoyed my first home-cooked meal. My college trainer—Marv Marinovich—had a saying; he used to tell me that even the most superior athletic training can be obliterated by an inferior diet. People would walk in with Gatorade and he’d kick them out. He would say that as athletes, our bodies are like race cars: They don’t take normal fuel. He was a huge proponent of the Zone Diet.

Theodora: Around that same time, Troy’s junior year, he also got me on the Zone Diet, and I became interested in what I was feeding my body. Unlike Troy, I grew up eating home-cooked meals. My family is Greek, so that meant a lot of butter. A lot of fattening food that was delicious, but not always the healthiest. It was a balanced diet, but I didn’t even think about what I was putting into my body. It just kind of went in. When Troy started training with Marvin, we were living at my parents’ house in Orange County. That’s when the entire family went on the Zone Diet! From that point on, I decided to eat really healthy, organic, farm-fresh foods.

LMP: As parents, what are your thoughts on getting kids excited about eating healthy foods?

Theodora: For our kids, I’ve found that letting them help cook gets them excited about what they’re going to eat. I like to tell stories about the food: broccoli and cauliflower are trees. It’s important to make things fun.

LMP: What are your favorite ways to stay active with your family?

Troy: I think it is important to do something everyone enjoys. Going to the beach is the main thing we do as a family.

Theodora: I’m a runner. I have one of those double jogging strollers. I put the kids in and we go! We talk about the trees, the birds and make it exciting. We pretend that the stroller is a rocket ship. Now, when Paisios sees a double stroller, he asks, “Are we going to go jogging in the rocket ship?” It’s really important for moms to stay active—and dads, too, who aren’t playing football!

LMP: Screen time is a huge issue these days: computers, TVs, cell phones. Do you have any advice for inspiring kids to move away from their screens and get active?

Theodora: I definitely think you have to constantly reinforce with children that fresh air and getting outdoors and learning about nature are important to growing, creative minds. When we’re in Pittsburgh, we go to Phipps all the time. We have to be responsible as parents to get them outside and away from their computer screens.

LMP: Troy: Do you have an early memory of being involved in physical activities/sports?

Troy: My earliest memory of football is playing with my brother one on one. We’d play on the front lawn, throw on the sprinklers and get muddy. I was never indoors as a kid. I was a real street rat to be honest, probably every parent’s nightmare. When I moved to Oregon to live with my aunt and uncle, we only had one channel, so we would have to get creative. We made up games to keep us active outdoors.

LMP: How would you recommend getting kids to enjoy free play time, like you did as a child?

Troy: I think it’s hard to live in the city and keep kids active. When I lived in Oregon, we were in the country with two miles between each house. If you live in the city, my best advice is to make play dates and take kids to the playground. Network with people and find out what others do.

LMP: Troy: Aside from football, what are some other ways you like to stay active?

Troy: Last year, I had an interesting off season with the lockout. So, I did a little of everything— from pool to bowling lessons. I also enjoy surfing. But, for the most part, training takes up my entire life.

LMP: People are connected to the earth through the food they eat, all of which begins with vegetable gardens. Tell me what inspires you about gardening.

Troy: It’s always been my passion to have a self-sustaining farm. I love the idea of not being dependent on anything. The greatest thing is that sunshine, rain and heat are all free. All it takes is somebody to have the motivation to care and nurture the seeds. God does the hard part, and it’s our role to nurture the seedling to live, which can then sustain your life.

LMP: Favorite meal to share together as a family?

Troy: My wife makes great chicken, and I love that more than anything.

LMP: Favorite restaurant or market in Pittsburgh to pick up healthy foods?

Theodora: I do the shopping, so I’ll answer this one. I love Soergel’s (Orchards in Wexford). They have great organic meats and snacks, and a vegetable section separate from the grocery. I take the children with me. There’s an area where kids can go in a wagon and see animals, and food they just grew and picked. We also shop at Whole Foods.

LMP: What would you recommend as an alternative to fast food?

Troy: We came up with the idea for LYFE Kitchen in Palo Alto because we wanted a healthy fast food restaurant. Everyone’s on the go, and it’s all about convenience and price. Price I think is the major thing: You can get an entire value meal for the price of an apple or grapefruit at Whole Foods. Or, pineapple. I bought a pineapple for $4 the other day. For that amount, you can get an extra value meal with free refills at a fast food chain. That’s why we created LYFE. To offer people organic foods fast, and at a fair price.

LMP: Any plans to open a LYFE Kitchen in the Pittsburgh area?

Troy: Absolutely—that would be great!

LMP: Unhealthy family routines and bad habits that are passed down are often major factors in childhood obesity. If you could recommend one small change that every household in America could implement—whether it be related to food or getting active—what would it be?

Theodora: I would say it’s really important to start the day off right when the kids first wake up. Instead of offering sugary cereal, maybe give them an egg, and let them be part of what you’re doing. Or make a smoothie, and let them throw stuff in and make it a fun color.

LMP: What healthy foods are always in your fridge and pantry?

Theodora: Kale, spinach, carrots—ingredients for our green juice! We are avid juicers. Troy’s concoction is kale, cucumber, spinach, carrots, apples, and sometimes some Asian pears. We give it to the children, and I drink it, too, but without fruit so it is just kale, spinach, cucumber, lemon, and parsley. It’s a staple no matter where we are. We bring our juicer when we travel.

Troy: We always have a whole lot of fruit in our house. Our children love eating it. Our three year old loves ruby red grapefruit.

LMP: Would you recommend homemade juice drinks to the average family?

Theodora: Absolutely. The alkalinity helps soothe and heal the body. Even if you’re not vegan or healthy, starting the day with green juice gives you energy, and is really good for you.

LMP: Other tips for the average Pittsburgh family with kids?

LMP: What are your hopes for Pittsburgh’s children?

Theodora: I would like to see children in Pittsburgh become more aware of food groups, and that food can be cool and healthy and taste good. If they eat greens, they can be super strong like Troy or Ben (Roethlisberger) or Sidney (Crosby). These guys are eating healthy and that’s why they do well in sports. Kids need that direct connection. That’s how they’re performing at their best. If you want to grow up and be like them, or like the top UPMC doctors, they’re eating brain food. It’s about feeding your mind as well. Any child’s dream starts with what they put in their body.

Troy: People need to be educated. If you don’t eat, you get grumpy. If I don’t eat right as a professional athlete, I’m not making split hair decisions fast enough, and I’ll get beat. If you drink an energy drink, you feel good at first from the sugar rush. You can have that same feeling consistently if you’re eating well-balanced meals and getting all of the greens and grains.

To learn more about Let’s Move Pittsburgh, and how you can become involved, please sign up today for our monthly e-newsletter with news, tips and more.

Newer Entries
Back to Top