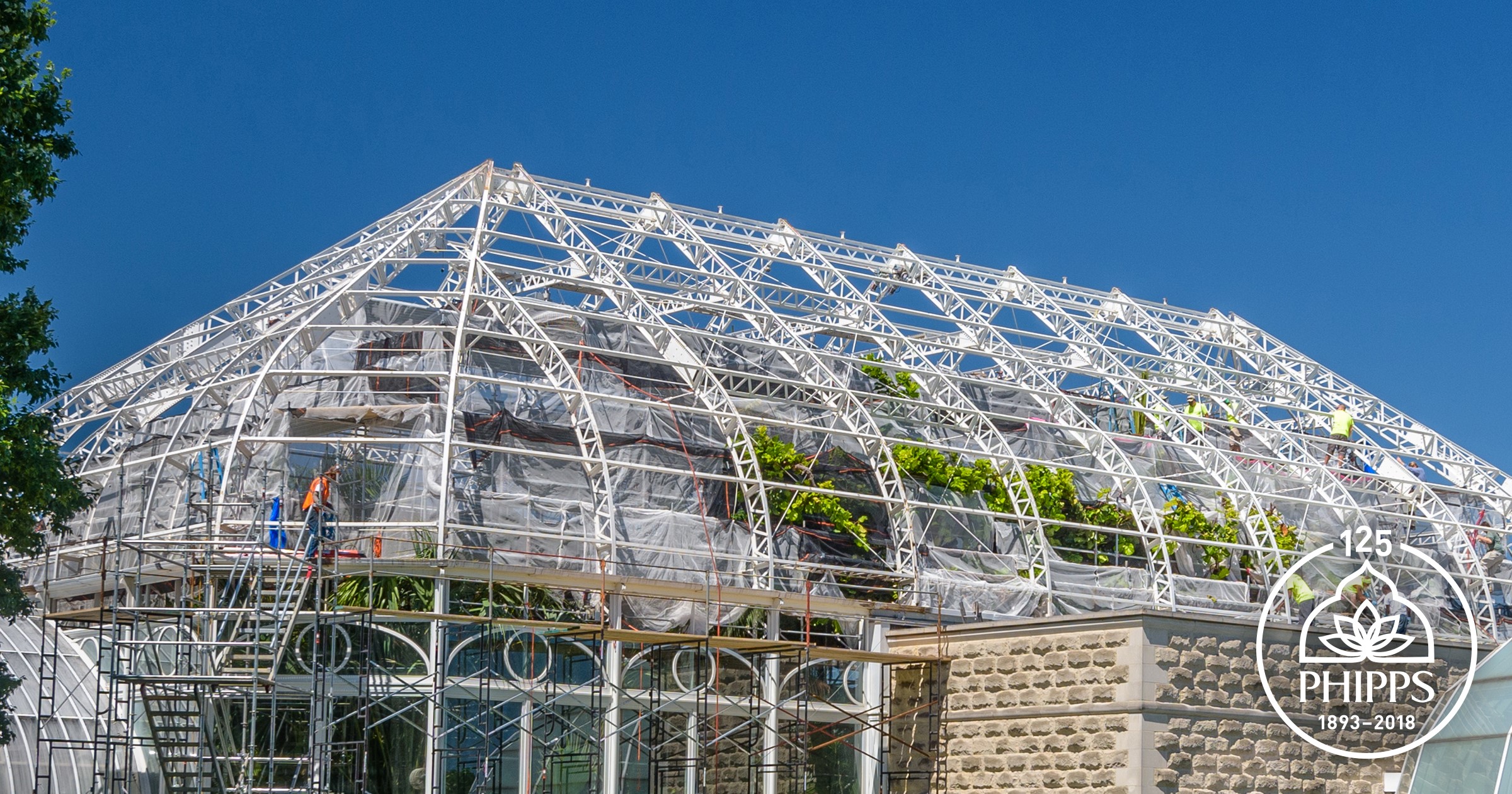 Pittsburgh, PA — To commemorate its 125th anniversary, Phipps Conservatory and Botanical Gardens’ historic Palm Court glasshouse is undergoing an exciting, critical restoration that will protect and sustain its beauty. Located at the heart of the conservatory, Palm Court has a treasured history and significance. It is the signature architectural gem that guests first experience at Phipps and are inspired by breathtaking plants, floral displays, special exhibits and collections. The renovation includes a replacement of the old wooden ribs, pane-by-pane replacement of the room’s glass and a dramatic recreation of the conservatory’s crowning ogee crest, a distinctive reverse curve, which has been missing since a catastrophic storm in 1937.

Dedicated architectural and construction teams will replace wooden ribs with aluminum ribs, meticulously extruded to match the original profile from 1893. They will also restore over 5,300 panes of glass to match the original design. The design is implementing a century-old technique of lapped safety glass, which means overlapping 3/8” of the panes to allow the entire structure to expand and contract with the changing seasons and extreme temperatures.

“The work that is being done today will preserve our historic Palm Court for future generations to cherish and enjoy,” states Richard Piacentini, Phipps’ executive director.

In addition to the restoration of the glass, ribs and ogee, the renovation process will also include ornamental elements, such as fleur-de-lis crests and color-changing LED lights in the ceiling. While Phipps has previously restored the glass in other display rooms, the scope of this project is most ambitious and will return the ogee crest — an iconic architectural feature — to the glasshouse’s silhouette. The ogee crest is composed of two arcs that curve in opposite directions, and it will restore the stunning skyline to its original design in honor of Phipps’ 125th anniversary.

Phipps is inviting the public to check out history in the making while taking part in preserving Phipps’ legacy by sponsoring a pane of glass. Guests can choose a pane of glass on the front, sides or ogee, and sponsors will receive a special certificate with the coordinates of a pane in their selection section as well as special recognition by Phipps. A message of up to 200 characters may be added to appear on the pane’s certificate and in public recognition. Learn more about the project and sponsor a pane today at phipps.conservatory.org/restore.

The Conservatory remains open throughout this restoration process, which is expected to be complete by the opening of Phipps’ signature Fall Flower Show on Sat., Oct. 13. Guests can experience history in the making by visiting Phipps every day from 9:30 a.m. – 5 p.m. or until 10 p.m. on Fridays. Admission is $17.95 for adults, $16.95 for seniors and students and $11.95 for children (2 – 18). Members and kids under 2 enter free.

About Phipps: Founded in 1893, Phipps Conservatory and Botanical Gardens in Pittsburgh, PA is a green leader among public gardens with a mission to inspire and educate all with the beauty and importance of plants; to advance sustainability and promote human and environmental well-being through action and research; and to celebrate its historic glasshouse. Phipps commemorates its 125th anniversary throughout 2018, celebrating its historic past, vibrant present and exciting future ahead — including inspiring seasonal flower shows, community events, public programs and groundbreaking green innovation. Learn more at phipps.conservatory.org.