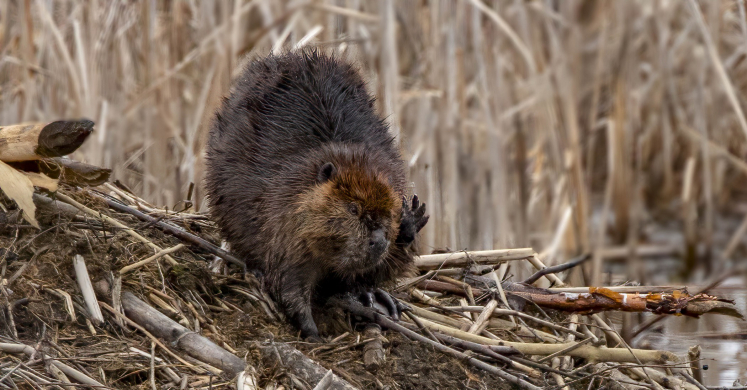 If you’re a Nine-Mile Run enthusiast, you’ve probably heard that there is a recent arrival who has ecologists excited and young trees quaking with concern — a new beaver! Frick Park has seen beavers in the past, but the animals are generally rather shy and tend to avoid humans, which makes them difficult to spot. But city park rangers have been able to capture video of our new little neighbor:

Beavers are a great sign of ecosystem health! And not to worry, your @PghPublicSafety Park Rangers are keeping an eye on this one!@radworkshere pic.twitter.com/YnzwDHkoMT

Welcome, Castor! Beavers strongly prefer high-quality habitats, so it is a very good sign for local ecology that Nine Mile Run is a new home to a beaver. And since I personally know a number of you out there who have been a part of park clean-ups, water quality monitoring, biological surveys, and invasive plant removal, I just want to give a huge thank you to everyone reading who has been a part of restoring the watershed and keeping it maintained. You all made this happen!

Now about those beavers! Weighing in at 35–70 pounds, American beavers (Castor canadensis) are the largest rodents in North America (rodent of unusual size…anyone?). Like other rodents, they have continually-growing incisors, and these teeth are perfectly fitted to gnaw on wood. If you were to see a beaver’s teeth up close, they would look orange — quite different from ours. That is because the enamel on the front of their teeth contains iron, which makes their teeth extra strong. The backside of their incisors lacks the iron, but that actually helps beaver teeth sharpen as they are used; the inner layer of tooth wears down faster, allowing the tougher iron-containing enamel to seem sharp like a knife’s edge. Also like other rodents, they have a notably round body with somewhat small legs by comparison. This makes beavers slow and clunky on land, but they can swim about six miles per hour (for comparison, Michael Phelps’ gold medal-clinching freestyle relay pace in 2016 was approximately 4.11 mph.)

Something that remains to be seen is what changes, if any, Castor might make around its new home. Beavers are sometimes referred to as “ecosystem engineers” because they are adept at modifying their habitats, generally by building dams. At the moment, city park rangers don’t anticipate Castor building a dam any time soon, but they have noted that there is plenty of good habitat along the stream banks for a bank den or perhaps even a beaver lodge. A lodge requires some engineering as well, though, as these mud-and-stick-houses can contain multiple chambers and underwater entrances.

On a closing note, beavers are actually a good example of what happens when humans work together to protect a species. By the early twentieth century, beaver had been extirpated from much of their traditional range across the US. Overhunting due to their warm furs and the mad craze of top hats decimated their populations in eastern North America, but they were saved by hunting regulation and concerted conservation efforts. Today, they are a success story!

So if you’re near Nine Mile Run while at Frick Park, keep your eyes open — you just might spot Castor, a walking legacy of conservation well done.

Really neat, I’ll have to watch for Castor next time I’m in Frick! I also had no idea they swim that fast or have iron on their teeth!