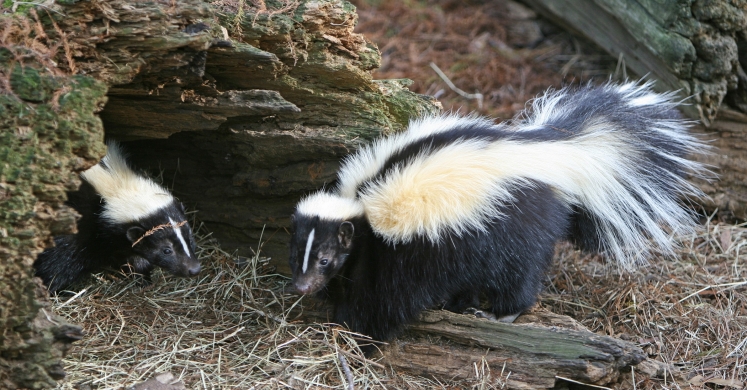 If there is a sight you don’t want to see when walking your pups, it’s a skunk! Luckily, our stinky striped neighbor didn’t seem to notice us late in the evening on New Year’s Day. He was just shuffling down the street (safely along the curb), tending to his own private skunky affairs. Now I will fully admit, skunks do have adorable little faces, but I wasn’t keen on either of my canine companions starting off 2023 with a difficult life lesson about the wafting waddler up ahead, so we backtracked around the neighborhood to return home with our own scents intact! Crisis averted!

Sunday evening, we didn’t get a close look to ID Skunky, but here in Pennsylvania, we are most likely to encounter the striped skunk, Mephitis mephitis. You may have guessed, based on the seasonality of our recent observation, that skunks are not true hibernators. Instead, during the coldest times in winter, skunks will go into torpor, a state of decreased metabolic activity. Skunks can live in a variety of habitat types, from forests to rural pastures to city parks. And their omnivorous diet is equally varied, including insects, fruits, small rodents and even snakes! Though their homes and diets may vary, skunks are uniform in their solitary, nocturnal lifestyle. They prefer to stay out of sight, even with their defensive musk; but during February and March, they make an exception to the solo life for breeding season. The primary predators that skunks have to worry about are great horned owls. Since these birds of prey have a limited sense of smell, the musk won’t deter them from making a meal out of a skunk.

Whether owls ignore it or not, skunks are most famous for that musk that we wanted to avoid on Sunday! Skunks produce their musk in small glands around their anus, and when they spray, little muscles around gland help eject the musk. Lucky for us, skunks will try to intimidate before they resort to spraying. When threatened, skunks usually first perform a warning dance, which can include foot-stamping, turning circles, or even performing handstands (a spotted skunk behavior)! If you aren’t running by then, though, it’s probably too late. Skunks can directly spray their musk up to fifteen feet, and the smell can waft much further. (Depending on weather conditions, humans can detect the scent over a mile away.)

In what seems to be a rude practical joke of nature, though, skunk musk actually packs a stinky double-punch. The primary scent that we notice comes from a group of chemicals called thiols, and we smell them immediately. However, if you’ve ever bathed a skunk-sprayed dog and noticed that he seemed to smell worse after the bath, that’s because some of the chemical compounds in musk (thiolacetates) are activated by water. If you or a four-legged friend do get sprayed by a skunk, the fabled tomato juice bath won’t help. The most effective options seem to include a detergent meant to clean grease, like dish soap, and a mix of diluted hydrogen peroxide and baking soda. The detergent will break down the oils present in the musk, and the peroxide and baking soda will break up the thiol molecules. (Do be aware, though, that the peroxide can bleach hair, fur, and clothes!)

What is important to remember, though, is that skunks don’t want to spray you; they generally just want to be left alone. They carry 5-6 “sprays” by default, but if they deplete their supply, it can take them up to ten days to generate enough to spray again, during which time they are defenseless. As with most wildlife, if you don’t bother them, they won’t bother you.

Now I will admit, we will keep a wide radius around the next skunk we see, but here’s to a wild neighbor who is great — from a distance!