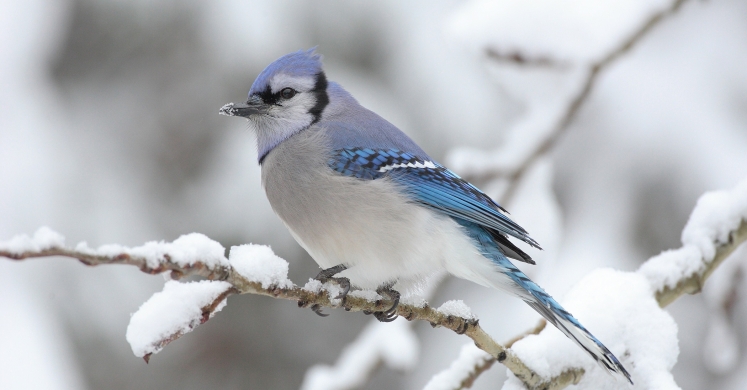 Have you ever heard a call that sounded almost like red-tailed hawk, but not quite? But then that bird almost sounded like some sort of jay, but not quite? You probably heard a blue-jay imitating a red-tailed hawk! Blue jays can mimic a number of predators’ calls, including red-shouldered hawks, osprey, and bald eagles. This skill, alongside the problem-solving abilities they share with their fellow corvids like crows and ravens, is part of how blue jays earned their reputation as tricksters! Let’s explore our bright blue friends a bit more!

When Jane Goodall first reported in 1960 that chimpanzees were using tools, she revolutionized the field of animal behavior and razed the contemporary anthropological definition of humans as “man the toolmaker.” Of course, nearly 60 years later, we now know that a great many species use tools, and even make their own tools—including blue jays! Corvids (members of the bird family Corvidae, which includes crows, ravens, jays, magpies, jackdaws, etc.) in general are now well-documented tool users, and even as far back as 1973, blue jays in a lab setting were observed strategically tearing newspaper to use as a “hook” to retrieve food items. This meant blue jays could identify a problem, plan a strategy to manage the problem and then carry out their plan. This is quite a bit of trickery to behold considering the concept was unheard of barely more than a decade before!

Another “tricky” feature of jays is an adaptation to help with caching stores of food: a distensible esophagus. This means their esophagus literally stretches to accommodate storing bits of food while they carry it away to a hiding place. Jays can even carry multiple acorns this way!

If we want to be picky, even a blue jay’s blue color is a trick—they technically aren’t blue. A true blue would come from a pigment, a chemical compound that absorbs all but a certain wavelength of light which it reflects back to us as a color. However, blue jays do not produce any blue pigment. Instead, they are an example of “structural coloration,” meaning the structure of an object is somehow responsible for interfering with light. In this case, blue jay feathers have microscopic barbs that ultimately break up light and look blue when we see the feathers head-on. (It’s actually a similar phenomenon to the Tyndall scattering that gives us a blue sky). If you were to try to extract blue from their feathers, like you can extract green from leaves or purple from berries, it wouldn’t work. No pigment!

Of course, a few things about blue jays must be rather straight forward—not everything can be tricky. Blue jays are a strictly North American species, and most of them are year-round residents, although a few populations in the Western US and Canada may migrate short distances seasonally. They have proven themselves to be quite adaptable as humans expanded into their habitats, and if you have a bird feeder at home, you’ve probably seen more than one blue jay stop by for a snack. Then again, blue jays are omnivores who are happy to eat insects as well as seeds and nuts; perhaps it is a bit “tricky” or at least surprising to note that they have been known to pick at carcasses or snatch other birds’ eggs.

Well, it seems now that blue jays’ reputations as surprising birds accurately precedes them. It’s no wonder that Indigenous North American stories often feature blue jays (along with other jays) as clever tricksters, and even Mark Twain used the blue jay’s wit and persistence as satire in “Jim Baker’s Blue-jay Yarn” from his book A Tramp Abroad. For me, clever neighbors like them is just one more reason for awe and respect for the natural world out there.

Connecting to the Outdoors Tip: Blue jays are commonly spotted at bird feeders, if you want to keep an eye out for them. You can actually taking feeder watching to the next level and join a citizen science project from the Cornell Lab of Ornithology specifically by watching said feeders at planned intervals.