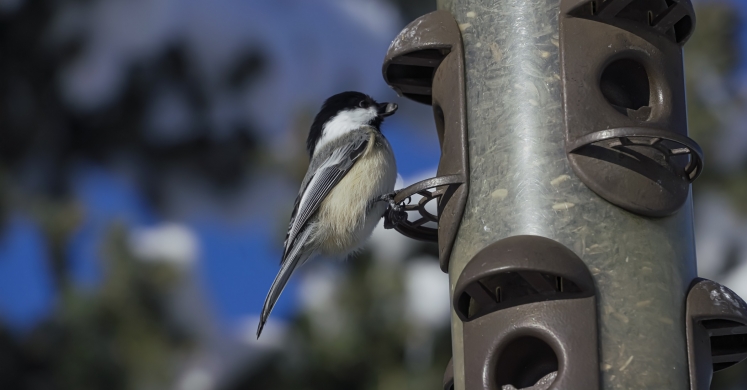 What do career cab drivers in London have in common with chickadees and crows? If you guessed enlarged hippocampi in their brains, you are correct! The hippocampus (plural, hippocampi) is a part of the brain involved in memory formation, emotions, and learning. So why does the brain of a London cabbie have specialized neural anatomy in common with birds often found in our backyards? Let’s find out!

First, we need to take a step back. This time of year, a number of bird species, such as the aforementioned chickadees and crows, plus titmice, nuthatches, and jays, are returning to caches of seeds they hid for themselves earlier in the fall and they are creating new caches when they find more seeds. Not all bird species save their snacks for later, but there is a variety of behaviors involved for those who do. Depending on the species, some birds bury their future snacks (usually seeds or other plant materials) in the ground while others wedge their food items into crevices and cracks in bark or tree branches. Most species who store food for later also engage in “scatter hoarding,” keeping multiple cache sites, rather than a single cache “jackpot”. Some species of nutcrackers have been known to hide up to 100,000 seeds a year—which breaks down to thousands of caches to find.

This is where the connection to London cab drivers comes in. Several years ago, before we all had GPS in our cars, a large-scale study revealed the famous English cab drivers had enlarged hippocampi. We mentioned earlier that this part of the brain is related to learning and memory formation, and London cab drivers had a unique challenge: memorize the entire layout and accompanying landmarks of a city built in stages over hundreds of years and not on any sort of grid. The drivers had to become masters of navigation and know exactly where they were plus how to get anywhere else in the city. Just the training process to become a London cab driver is a multi-year endeavor. Thus, the region of their brains associated with acquiring and maintaining that unusually complex knowledge became noticeably enlarged when compared to the general population.

If we jump back to birds who cache food resources, we see a similar change in brain anatomy. Not all bird species cache food, and of those who do, most only engage in the behavior seasonally in fall and winter. These two distinctions give us the opportunity to compare the brains of caching birds and non-caching birds. Birds actively involved in caching their food will show enlarged hippocampi just like London cab drivers—which makes sense! If they are scatter hoarding, each individual bird, depending on the species, can have up to thousands of caches to remember and find over a season, and this presents the same navigational challenge that we see in London cab drivers. As an added comparison, during the spring and summer, birds who cache will engage in the behavior less frequently, and their hippocampi return to a smaller size until the next caching season. In fact, birds of the same species can even show greater differentiation in hippocampus size by living in harsher climates and, presumably, keeping more caches and needing to remember a higher number of locations.

As someone who probably relies too heavily on GPS for navigation, let’s give a salute to our feathered friends! The change in brain anatomy suggests they are regularly engaging in a significantly challenging mental game to keep their snacks safe for later, and it serves as just another reminded of how awesome nature really is.

Connecting to the Outdoors Tip: If you have a bird feeder at home or somewhere that you can hang out a while watch the corvids, woodpeckers, and chickadees that you see. Do they appear to be eating seeds on site, or snatching up a few and darting away? If you a wide enough viewing area, can your eyes follow one after it hops away from the feeder?

The Cornell Lab: Where Is That Bird Going With That Seed? It’s Caching Food For Later