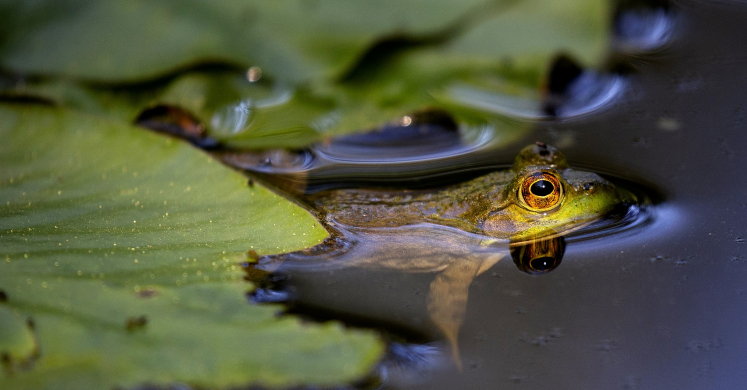 Down in the lagoon – it’s a…burp? It’s a complaint? It’s a bullfrog!

Once you’ve heard the bellowing belch of the American bullfrog, you don’t forget it. And as loud and distinctive as they are, the bullfrog’s girth matches their glug. The largest of Pennsylvania amphibians (and the largest in North America if we don’t count the cane toads that occasionally appear in Texas), bullfrogs have been measured up to eight inches long from snout to hind end, and their large size contributes to the voracious eating. So from big songs, to big size, to big suppers, let’s learn about more about our beefy bullfrog, shall we?

First, let’s go back to that big call of bullfrogs. Their vocalizations can reach a volume of up to 80 decibels, which is on par with gas-powered lawn mowers and leaf blowers (note, a number of web sources list 119 decibels as a bullfrog’s call volume, but I have been unable to verify the original citation for this number. That volume would result in injury to listeners’ ears!) Bullfrogs’ prominent bellowing is most commonly used as a territorial or courtship call. Males may try to attract females with their cool crooning, or both males and females may try to ward off other bullfrogs from their territories. Bullfrogs also call if they are in distress. In the recording below, you can hear the deep, bellowing call of the bullfrog, punctuated by the calls of a green frog (the green frog’s call sounds something like a spring being released.)

It rather makes sense for the big voice to have a big body behind it. Adult bullfrogs can typically weigh up to a full pound, while some heavyweights have tipped the scales at over 2 lbs. (Compare this to a another PA frog, the spring peeper, which many only weigh as much as a nickel!) Even as tadpoles, bullfrogs dwarf their fellow amphibians. Bullfrogs can remain in the tadpole stage for 1-3 years, and during that time, they may grow up to six inches long.

Of course, this big frog has a big appetite, and a big mouth to feed it! Bullfrogs are notorious for eating anything and everything they can fit in their mouth – and that can mean insects, crayfish, snakes, fish, small mammals, birds and…other bullfrogs. In eastern North America, where bullfrogs are native, ecosystems are adapted to the presence of a voracious little predator helping to manage prey populations. However, our bullfrogs have been introduced to other regions of the continent, and world, which creates a situation stickier than a frog’s tongue (and that is pretty sticky.) In California, the introduced bullfrog can impact native frog species as it is able to consume both the tadpoles and other adult frogs. Here in Pennsylvania, though, we can appreciate that avid eater for all its worth. Check out the video below for some footage of bullfrogs being mealtime beasts!

You can spy some bullfrogs in the lagoon next to the Center for Sustainable landscapes or in the pond at Schenley Park, but really, you can find bullfrogs in a number of ponds, lakes and wetlands in the area. Have fun exploring! 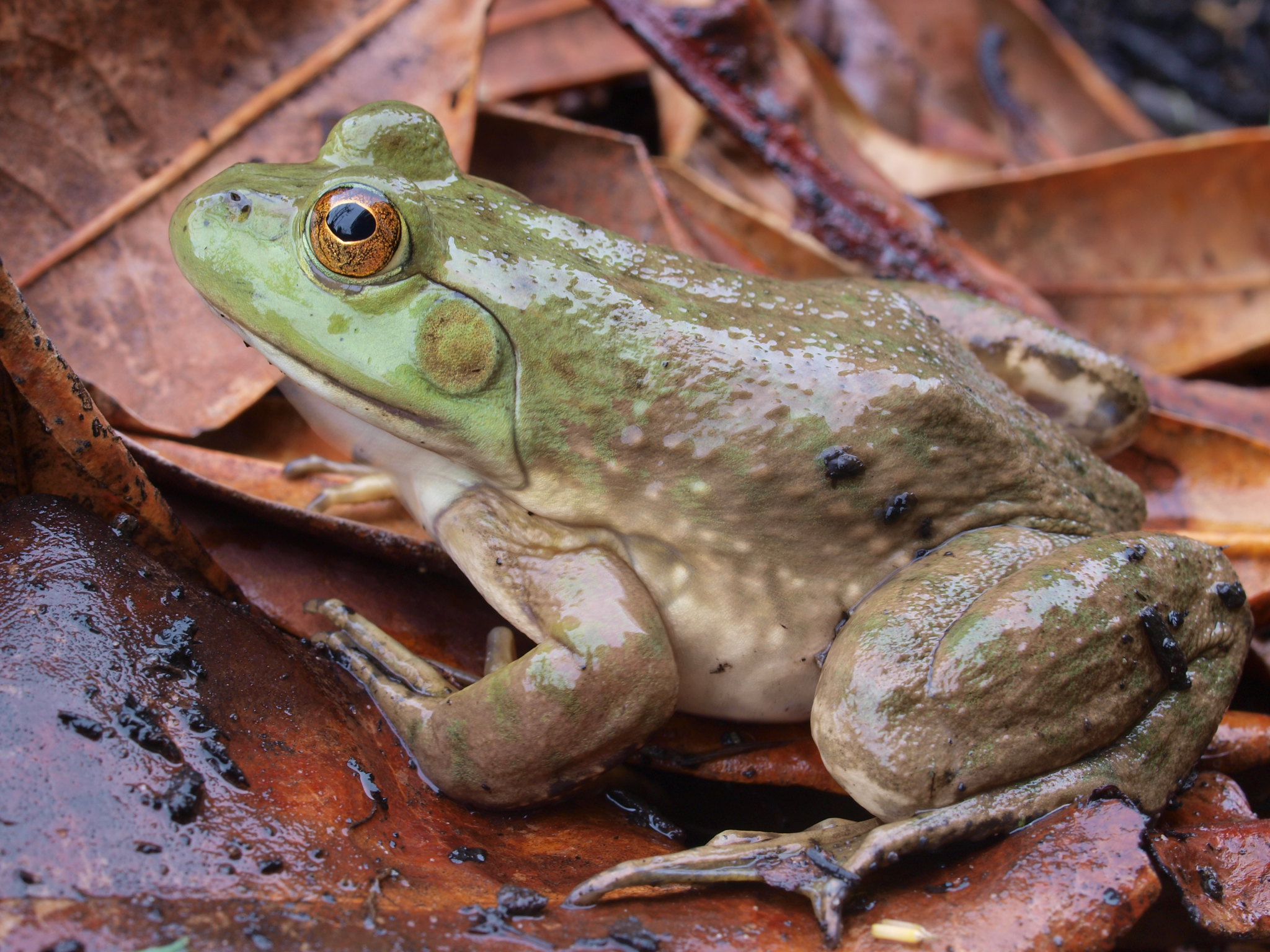