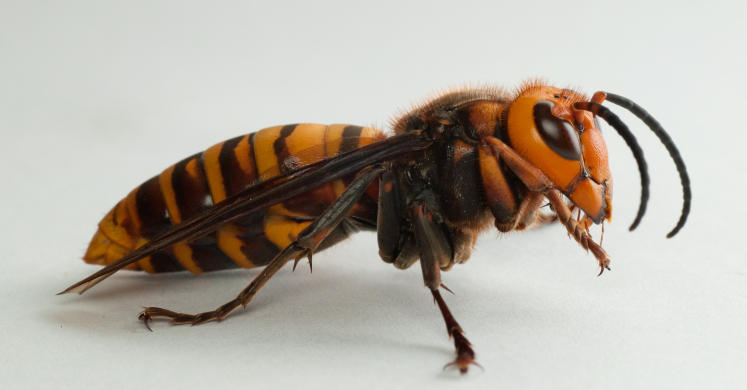 As if 2020 weren’t already the basis of an intense drama, headlines of Asian giant hornets (aka “murder hornets”) in Washington State invaded our newsfeeds over the weekend. The idea of these insects may seem alarming considering their famously painful sting and their ability to devastate entire hives of bees in merely hours, which is particularly concerning given our existing decline in pollinator species. And didn’t we just recently ramp up the alert for the spotted lanternfly? And haven’t the brown marmorated stink bugs been a pesky nuisance for a few years now? So many invasive species pests! One thing that gets lost in the storylines of invasive and nonnative species, though, is that we in North America aren’t the only ones who experience this kind of issue. Our own local species have jumped (or rather were carried) across both ponds and have made a nuisance of themselves on other continents as well. Let’s look a little more into the idea of non-native species, and see which of our own biota have become troublemakers abroad.

First, let’s clear up a few terms that can easily get confusing. An invasive species is defined as a species that was not native to a particular region, but arrived in that new given area (primarily through human activity), became established, and had distinctly negative impacts on existing ecosystems and community members. Most of us are familiar with the invasive pest the emerald ash-borer, which has devastated ash trees in the parts of both Canada and the US; invasive species impacta can also be seen in the multiflora rose filling the forest floors of many of our favorite hiking trails. An introduced species, though, is similar in that it did not originate in a particular area, but it has not had a detectable negative impact in its new community. Once that introduced species has become self-sustaining in the new landscape, it is referred to as naturalized. Some naturalized species have actually become essential to us, like the European honey bee, which has become hugely important for agriculture.

Because we experience firsthand the problems invasive species cause in our own areas, we may tend to think of all invasive species as those that have come here and wreaked havoc. Sometimes, even the way we decribe invasive species takes a on tone of fear of "otherness." What we often forget, though, is many of our native species have made it to other parts of the world and are causing big problems there! American bullfrogs, for example, escaped the pet trade and have been quite detrimental to waterways in Europe, South America and Asia where their appetites can disrupt invertebrate populations. On the plant side of things, as much as we may prize our beloved common milkweed for its role in monarch butterfly life cycles, 23 European countries have been struggling with it as an invasive plant that outcompetes many of its own native vegetation, and the plant doesn’t even serve as essential host to any of Europe’s insects. Ragweed has also wreaked havoc on European allergy-sufferers in recent years as our native plant has taken off across a new continent, while our Western skunk cabbage has become a stinky little addition to several EU countries. Australia is struggling with cane toads from the Americas; Africa is losing the battle against North American crayfish and Australian eucalyptus; and Asia is struggling to manage our mosquitofish and Mexican bean beetles which are damaging waterways and crops, respectively. Whew! Species from around the world have been carried to other places where they have become problematic.

Here is an important point, though: no species is inherently bad. Yes, all of the invasive species discussed above cause problems, but they cause problems because they are separated from the environment that they were adapted to. Nature is good at checks and balances; when we move species around, we take a plant or insect out of an environment that has kept the species in check and we introduce it into an area with potentially no way to stop growth and spread.

What can we do about all of these globetrotting organisms? Well, the overwhelming majority made it to new destinations because of human activity — sometimes by the ballast waters of ships, sometimes through the pet trade, sometimes as accidental cargo or as plants that escaped cultivation. The important thing for us to do is be mindful of the habitats around us. An exotic flower may be beautiful in its native habitat, but that doesn’t mean it belongs in our gardens. Or that frog or lizard might be super cute in the aquarium and you may be a responsible pet owner, but the supply chain for those species could be a whole other issue. In short, what can we do to minimize invasive species around the globe? Mainly remember that we are all connected in some way, and our actions have ripple effects beyond what we can imagine. We all want to do the right thing, so let’s be mindful of our natural world.

Now just watch out for those murder hornets, and we're all set!