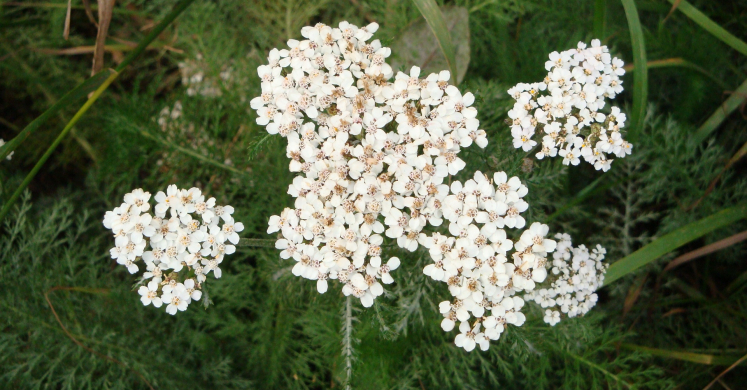 I was at a graduation party at North Park a few years ago when a beautiful display of color across the street caught my eye. The Demonstration Garden was in easy view from our picnic shelter, and an assortment of yarrow cultivars looked like enchanted puffs of yellow, pink, purple, and red little clouds. 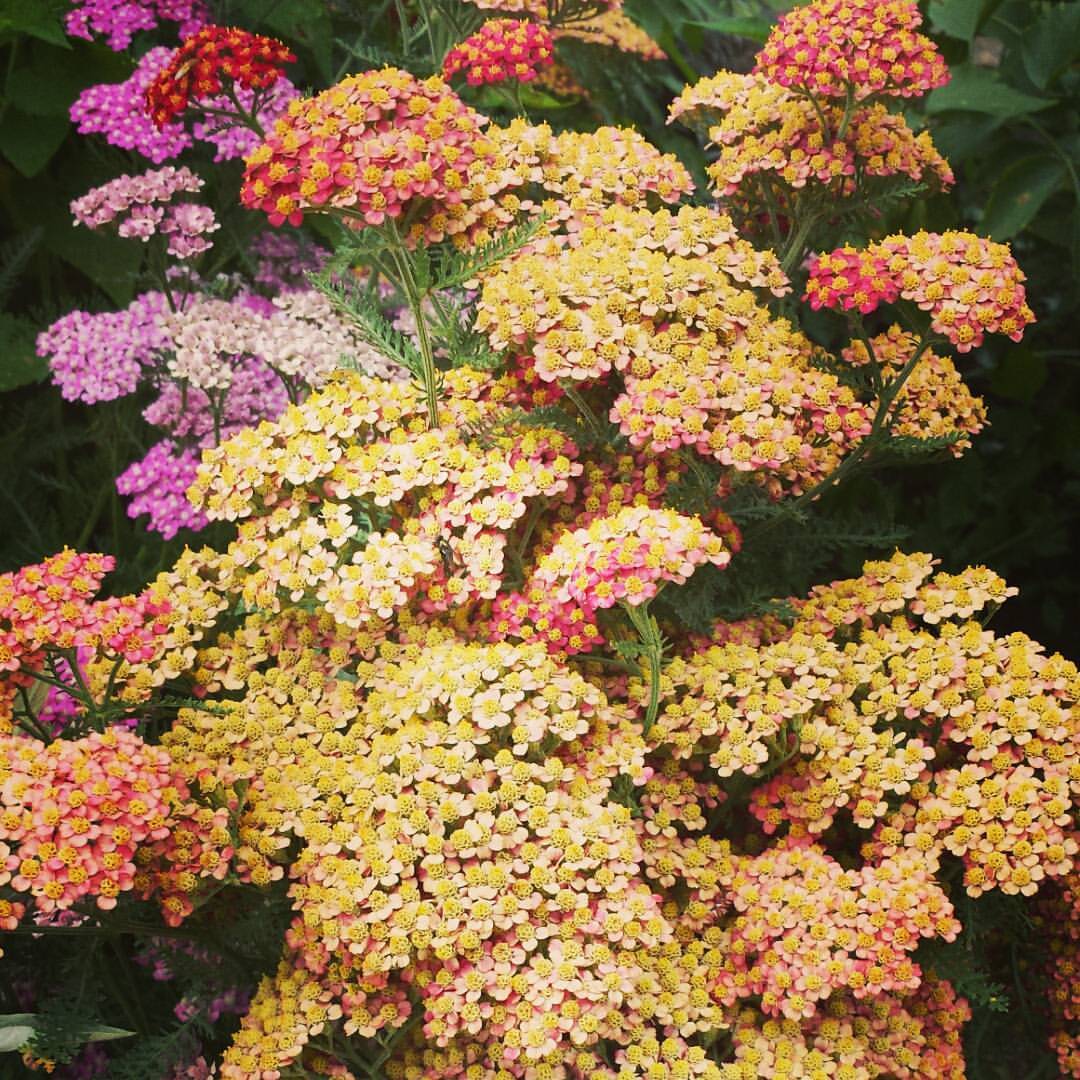 Wild common yarrow (Achillea millefolium) may not be as colorful as its garden counterparts, but it is still a beautiful feature in a landscape and an important host for pollinators. Let’s learn a bit more about it, shall we?

Common yarrow is an herbaceous plant that can grow up to three feet tall and topped with wide, flat clusters of flowers. It is widespread across most of the Northern Hemisphere (that’s correct — not just North America, the Northern Hemisphere). While technically the species is considered to be widely distributed, botanists have broken down a number of subspecies across the globe.

No matter where it grows, though, yarrow develops a reputation as a medicinal plant. Cultures from across time and geography have used yarrow for everything from pain medication to relief from the common cold to a coagulant on the battlefield. On a more romantically mystical note, folklore of the British Isles suggested that yarrow under your pillow would give you dreams to reveal your true love (one could consider that medicine for life-planning, perhaps?) Today, though yarrow may not be a universal staple in household medicine cabinets, a number of studies explore the antibacterial properties of yarrow compounds when mixed with other plant chemicals (see here and here).

Common yarrow is a member of the Asteraceae family. If you remember from our previous chats about Asteraceae flowers, each “flower” like a single daisy or brown-eyed susan is actually a composite with hundreds of tiny ray florets and disk florets making up what looks like the “petals” and center of the flower, respectively.

You can see the disc florets of this sunflower clearly here—they look like tiny flowers themselves!

Like the rest of Asteraceae flowers, yarrow has tiny florets grouped together to create what looks to us like a flower. But then, each inflorescence — each “cloud” — is actually made up of many composite flowers. 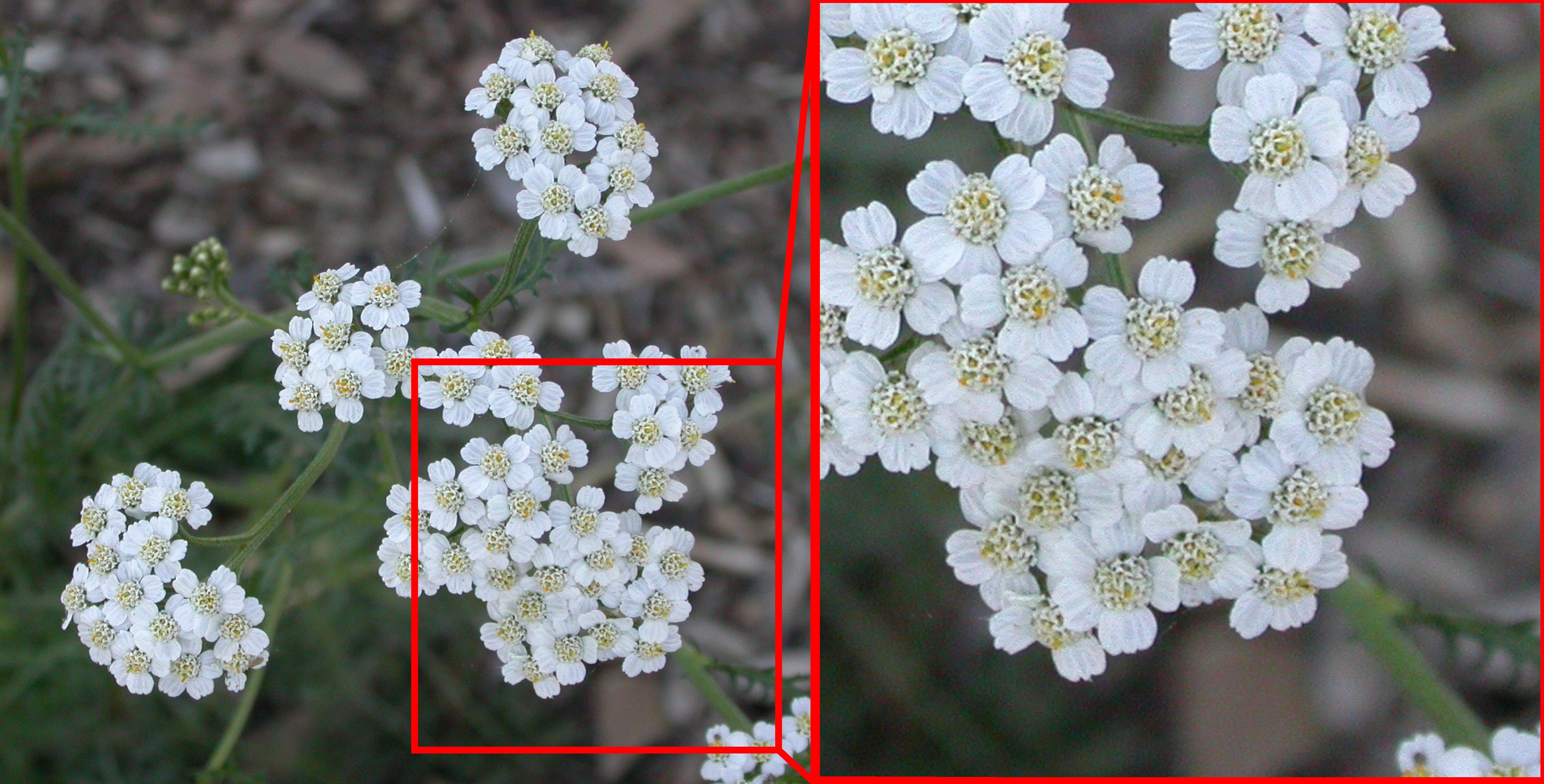 Inflorescence of yarrow. What looks like the center of each little “flower” is actually several tiny florets! Modified from image by Wikimedia User Curtis Clark, CC-BY-SA-2.5

Yarrow can make an eye-catching garden addition; and as the Lady Bird Johnson Wildflower Center notes, it can also help attract and support beneficial insects while deterring pests, which makes it a useful companion plant. There are a number of cultivars of common yarrow, some of them quite colorful, but I will just add to plant with caution as yarrow is toxic to many domestic animals, including cats and dogs.

If you are on a walking trail, though, keep your eyes open! Common yarrow has already begun blooming in our area, but we should see it throughout the summer — possibly as late as September. Happy hiking!

Connecting to the Outdoors Tip: Yarrow easily grows in disturbed or human-impacted areas, so it is easy to spot around in places ranging in habitat quality from meadows and roadsides.