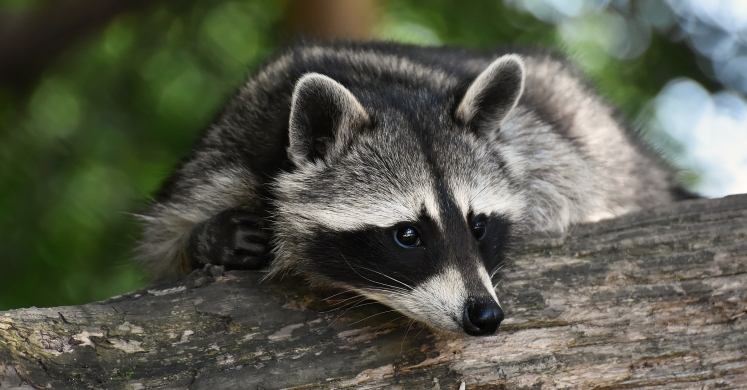 Trash panda. Masked bandit. Dumpster prowler. Target tail. My goodness, these are just a few nicknames out there for a misunderstood but quite intelligent little neighbor to many of us—the raccoon (Procyon lotor)! Whether you have seen them on their nightly quests for garbage can buffets, or you have seen the many YouTube videos of their nimble little paws, you probably have some thoughts already about these creatures, but let’s see if we can try to understand them with a bit more clarity.

Raccoons are medium-sized (10-20 lbs), nocturnal mammals that are widespread across North America. As many of us are aware, these opportunistic omnivores are certainly not picky eaters—particularly when it comes to our trash. Outside of urban environments, though, raccoons eat a broad variety of plant items such as fruits, nuts and leaves; but they will also eat some hunted items including crayfish, small rodents, bird eggs and amphibians.

In our towns and neighborhoods raccoons are often labelled a nuisance to us, but that is because they are expert problem-solvers and quite dexterous with their forepaws. In fact, even their name is derived from their “handy” abilities—the modern word raccoon comes from the Powhatan (Algonquian) words raugroughcun or arocoun, roughly meaning “he scratches with his hands.”

In lab studies, raccoons have put those paws to work when they creatively devise new solutions to common animal cognition tests. For example, one recent study used the “Aesop Fable” test—a reference to the fable about the crow who dropped rocks into a pitcher, which displaced the water and allowed the crow to take a drink. The test involves teaching animals how to place objects in a tall vessel of water, allowing the height of the water in the vessel to change, and then observing whether or not animals will use that skill to acquire a treat that is floating in the water. Species that are known for problem solving tend to discern that they can raise the level of the water by dropping rocks into the vessel, thus allowing the treat to rise closer to the top of the container. Raccoons, on the other hand, rarely performed according to expectations. Instead, they would find ways to knock over the container, sometimes climb up the container, and devise other novel ways to reach the reward!

In the video below, watch how raccoons are able to put those problem-solving skills to the test! Also take note, though, that the researcher correctly points out that raccoons aren’t trying to be a “nuisance.” Our world overlaps with theirs, and they are simply adapting to the changes we have made to their home.

In addition to their ingenious tricks, a common concern many of us have about raccoons is their status as a rabies carrier. The CDC reports that as recently as 2017, raccoons were second on the list of species with the most frequently reported cases of rabies in the US (bats were first.) However, you are still unlikely to come across a rabid raccoon—even if you spot a raccoon in daylight, it is more likely that you spotted a nursing female who is out foraging than a sick animal. As a precaution, though, avoid handling wild scat or remains that you may find; and if you do come across an animal behaving aggressively, clear the area and call either animal control or the police. You can also check out suggestions from the Humane Society.  And as with any wildlife, the best thing we can do for wild animals is leave them alone.

Well, I do hope this inspires a little newfound awe for our little neighbors. But all the same, perhaps be sure to put a bungee cord on that trashcan for the curb!

Connecting to the Outdoors Tip: You are more likely to see these little furry friends in the evenings, or if you have a trail camera.