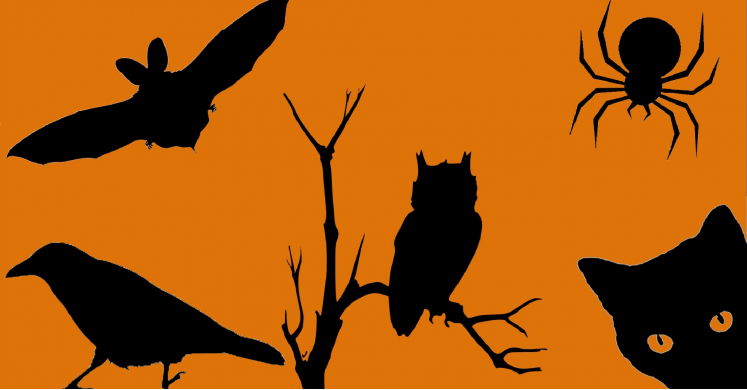 Porches are decorated with jack-o’-lanterns and scarecrows, and whether or not you’re trick-or-treating, I hope you have a fun costume to make you smile because Halloween weekend is here! As much as we love the festive spooks, what of the animals who adorn our eerie window clings and lawn décor? The bats, owls, ravens and others? Are they something to be feared, or are they exciting members of our local wildlife communities? Let’s look at them a bit more closely!

First, let’s talk about bats, and oh! how they can make some folks shiver. The truth is, though, bats are excellent creatures to have about. The majority of bats across the planet are insectivores, meaning if you don’t like mosquitoes, you’ll love bats. The remaining species of bats are largely frugivores (fruit-eaters), while some species might hunt small prey. Of the ~1400 species of bats in the world, though, only three South American species of vampire bats gave rise to notorious legends that strike Transylvanian fear into our Halloween parties and nighttime walks. But never fear, you won’t find them here. Instead, keep your eyes open for Pennsylvania’s most common bat species, the little brown bat (Myotis lucifugus). They will be out and about this time of year until November when they will find a cave for hibernation.

What about spiders? Spiders and their eight legs, and those eight eyes (for most species), and those webs that fill up dark corners…so spooky. But spiders are quite essential members of our wild communities! They prey on insects and other invertebrates that we typically consider pests, plus they are food themselves for birds and other animals that eat “bugs.” Beyond their roles in nature, though, spider silk is a curious model in engineering because of its unique combination of strength and flexibility.

Now what of the owls? Often considered a creepy animal because of their nocturnal behavior and haunting hooting; however, their array of adaptations for life at night is part of what makes them so interesting. Owls have unusual flight feathers to help them fly silently. If you ever have a chance to see owl feathers up close, you’ll notice the edges are serrated and soft. This odd texture muffles sound as they flap their wings, allowing them to sneak up on prey. Also, to help see in the dark, owls detect as much light as possible with their enormous eyes. In fact, their eyes are so large that there isn’t enough room for eye muscles in their skulls—meaning their eyes cannot move the way ours can. Instead, owls have double the number of neck vertebrae as humans and can turn their heads almost to the back (but not all the way around!)

Black cats may not be a “wild” Pennsylvania animal, but they certainly generate attention around Halloween. A variety of cat breeds can produce all-black cats, as well as some mixed breeds, but the origins of black cats as bad luck or dark omens seems to have arisen in the Middle Ages. Perhaps because they could disappear into shadows or perhaps their green eyes seemed to “glow,” black cats became largely associated with spooks and spells across Europe, and those superstitions carried over to North America with colonizers. Ironically, there are a few situations in which case black cats are good luck (for example, a black cat in England boarding a ship before departure), but around Halloween, these harmless kitties often have an unpleasant association. I can assure you though — black cats are no more trouble and no less lovey than our other felid furballs! (However, any outdoor cat be certainly be scary to our bird population.)

Let’s move on to our corvid Halloween friends (and that’s corvid – not covid), the crows and ravens. Considering that the collective noun for a group of crows is a “murder,” it makes sense that we created a creepy association with these birds. These birds, however, are absolute wonders of intelligence. In lab studies, crows out-performed chimpanzees in some aspects of problem solving, and they performed nearly as well on some activities as 5- to 7-year-old children. Crows in Japan have even learned to safely use crosswalks at busy intersections so that cars can break open nuts with tough shells!

Have a Happy Halloween, and whether it’s spooky season or not, keep exploring our local wild Pennsylvania!

Connecting to the Outdoors Tip: Since some of the creatures discussed here are nocturnal, keep watch for them in the late evenings. You can find our feathered friends year round in Western PA, and you have at least a few more weeks to spot a bat before they go into hibernation. Just be sure this weekend that you watch out for goblins and ghouls!