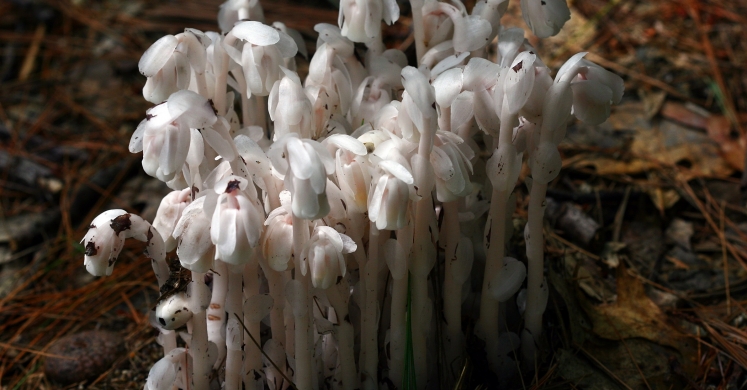 #bioPGH Blog: The Plant Without Chlorophyll

What would you call a beach without sand? A coffee shop without a latte? What about a plant without chlorophyll? That one is easy—Indian pipe!

Doesn’t that sound strange, though? A plant with no chlorophyll means there is a plant that does not produce its own food via photosynthesis. Actually, there are approximately 3000 non-photosynthetic plants around the world! Rather than producing their own food, they can parasitize other plants or fungi. Here in Pennsylvania, the non-photosynthetic Indian pipe (Monotropa uniflora) looks practically eerie with its ghost-white flowers, leaves and scaly stem, though it’s in the same family as blueberries, snowberries, and rhododendrons. (Pennsylvania is actually home to a few different non-photosynthetic plants, but all of them—including the Indian pipe—are rare.)

To completely appreciate how fascinating plants without chlorophyll really are, let’s take a closer look at the process that most plants use to produce usable energy: photosynthesis. The overall chemical process behind photosynthesis involves a plant converting carbon dioxide and water into breathable oxygen (O2) and a sugar— the last of which becomes the plant’s energy source. You may remember the simplified equation below from your most recent trivia night or your textbook days!

An important part to remember is that the process happens within a plant-specific organelle called a chloroplast. What’s an organelle? An organelle is literally a “little organ;” it’s a tiny working feature within a cell. Under a microscope, chloroplasts can be seen as little green flecks within their home cell, and their color comes from the plant pigment chlorophyll. It is chlorophyll, within a chloroplast, that initiates photosynthesis once it has been “excited” by a photon of sunlight.

The intriguing bit is that Indian pipe still has chloroplasts, but it lacks chlorophyll.

If you like investigating a good mystery, here is something else you will like about Indian pipe and other non-photosynthetic plants: they are wide open for study. As fascinating as they are, they are underrepresented in the scientific literature. This means that if you are a student intrigued by unanswered questions, studying non-photosynthetic plants might be just the path for you!

Connecting to the Outdoors Tip: Indian pipe can grow any time between May and October, you just have to be in a healthy older forest. According to iNaturalist (www.inaturalist.org), there have even been a number of observations of it in Allegheny County this summer, including at Frick Park! They are difficult to find, but even harder to grow in human care. If you do happen to spot one, take pictures and enjoy, but be sure to leave it as a something exciting for the next hiker.

Cullings, Szaro, and Bruns 1996: Evolution of Extreme Specialization within a Lineage of Ectomycorrhizal

Klooster and Culley 2009: Comparative analysis of the reproductive ecology of Monotropa and Monotropsis: Two mycoheterotrophic genera in the Monotropoideae (Ericaceae)

Cullings 1996: Single phylogenetic origin of ericoid mycorrhizae within the Ericaceae

That’s awesome, Dan and Joe! I have yet to see any this year, but I will my eyes open on the trails!

Comment try your best an know biology so much

Wow these are so unusual looking. I found a few on my backyard under the shade and by tree roots and thought they were some type of mushrooms.
I took some pics or it.

I have several plants in my yard in northern MN. It was virgin land when we bought it in 1975. But this is the 1st time I saw it.