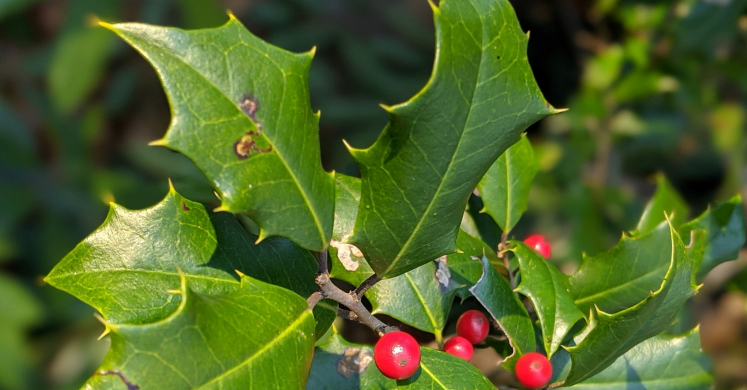 #bioPGH blog – To Prickle or Not to Prickle: Holly Leaves and Epigenetics

If we were plants, a regular concern would be the possibility of having our leaves gnawed off by a hungry herbivore. Those leaves are important as they are little photosynthesis factories making sugars, and it’s costly to lose too many leaves to a hungry deer or other browser. Plants have a variety of ways to make themselves a bit less appealing to a salad-seeking animal, and one fascinating strategy actually involves modifying how their leaves read their own DNA! Let’s check it out.

Today we’re going to do a molecular deep dive into holly plants. If you’ve ever looked closely at holly, depending on the species and cultivar, you might notice that some leaf edges are smooth and rounded while other lead edges are spiny and pointed — you might even notice that some holly plants have both types of leaves on the same plant! When the latter is the case, that holly plant’s default leaves were actually smooth and rounded…until an herbivore sampled some of the leaves. Then, those leaves grew back with an extra defense: poky spines. Holly plants are able to grow different kinds of leaves through the phenomenon of epigenetics. Their DNA doesn’t change; the new leaves still have the original DNA codes of those initial smooth leaves. But the new leaves have a tiny chemical addition that changes the way their DNA is read.

Let’s think of a cell as a tiny kitchen, and all of an organism’s DNA (its genome) is like a big cookbook with the recipes that ultimately make up each individual organism. Each recipe in that cookbook has instructions for baking something specific, and we can call each recipe a gene. When our cells need to make a protein, they can proverbially open the cookbook and get the specific recipe (gene) they need. As any baker knows, though, what is written in the recipe isn’t always exactly what gets baked. For example, post-translational modification literally means shortening or adding onto a protein after it has been synthesized, but we can think of it as saying the cell kitchen is adding or skipping an ingredient to make a modified protein during the baking process.

Epigenetics, though, is kind of like when you write a note directly on a recipe in the book. The original recipe (the DNA sequence of the gene) is still there and that recipe will get passed on to the next generation of bakers, but now that note is changing how the recipe is prepared. And, importantly, that note may accompany the recipe to the next generation of bakers as well. One way to literally “make a note on the recipe” is to add a methyl group to a point on DNA. A methyl group is a small chemical defined by having one carbon and three hydrogen atoms. When this little group binds onto different points in DNA, it changes how your cell is able to produce the end-goal protein – which ultimately impacts a physical trait in the organism. These methyl groups can attach to DNA based on a few different scenarios, including environmental or age-related situations. (A classic example of epigenetics in humans studied the adult children of women who experienced famine conditions during pregnancy in World War II. The children grew up to have a variety of health issues stemming from DNA methylation patterns created during their mothers’ experiences.)

In short, this leaf change and the precursor DNA methylation can come from the plant’s stress of having their leaves eaten. We often think of stress in terms of our how our mind is managing a difficult situation, but a stressor can be anything that threatens perceptions of safety or well-being — and plants can certainly use chemical signaling to detect something detrimental to the plant. So when a holly plant detects that leaves have been eaten, the stress can induce DNA methylation. And voila! Spiny leaves.

Well, the past two years have certainly been rather stressful for us humans, but let’s all try not to grow spines just yet! Spend some time outdoors and enjoy the quirky processes in nature, and we can hold on to spine-growing tactics as a last resort.

Connecting to the Outdoors Tip: If you would like to check out a population of American holly trees, check out Holly River State Park in West Virginia. The park was originally named for “groves of this evergreen which adorned its banks,” and with over 8000 acres to explore, it sounds like a fun weekend!

National Geographic – Hollies Get Prickly for a Reason

Brill…I’m a qigong shamanic practitioner about to finish reiki with final ayurvedic study…just lsst few days started up a website…a shamanic practitioner friend and I compare notes on our dna connect to plants….and yes….lovely see epigenetics in the mix…www.hermithealerinthewoods.uk if you can shed light….though what you teach I suspect steers clear from spiritual connect .THANKS for the blog on holly