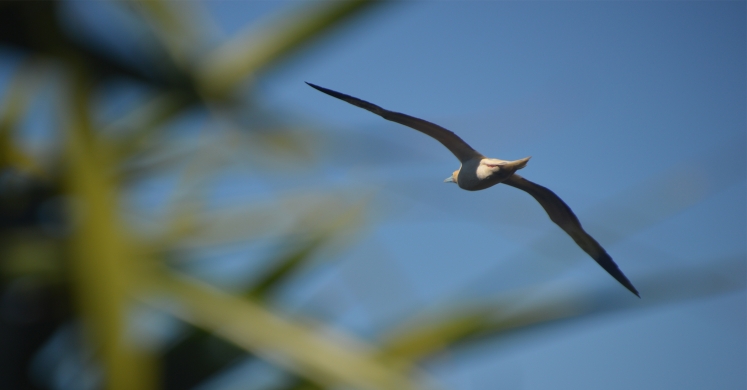 Birds on the Brain

The story of birds on the islands is not a happy one. Of the original 150 birds or so, over 90 have gone extinct. Of the remaining 44 endemic species, 33 are endangered. A third of these 33 are likely extinct. There are a mere handful of native forest birds that one can still see in the mountainous regions. Just like the people here, birds are intrinsically interconnected with the land. Many species are co-evolved with the plants. The iiwi, the bird most commonly associated with Hawaii, is a honey creeper which feeds on several different curved tubular flowers with its long curved bill. Though genetically similar to species found elsewhere, the plants pollinated by the iiwi constitutes an evolutionary radiation. One can only imagine what other such relationships we no longer see because one or the other of these partnerships disappeared.

We were lucky enough to see iiwi, ‘apapane, and ‘amakihi in the Alaka’I swamp forest of Kauai. We walked through these strange and beautiful lands under the guidance of David Kuhn, an avid birder and sound recorder. Though he’s lived in many different places, David has lived on the islands for thirty years. He has a keen sense of this place and a deep respect for the environment. He led us through the bog where ‘ohia, normally a tree, is dwarfed to a 2 foot tall shrub and sundews, a type of carnivorous plant, catch flies on the saturated soil. We walked down to a tributary pour through the Koke’e valley to see the cliff faces where another bird, the Puaiohi, has historically nested. Unfortunately this bird has moved further inland — these nesting sites have been largely abandoned.

These intricate relationships of the land are fragile. Island life on Hawaii breeds out defense mechanisms that exists on larger contiguous land where mammals are longtime residents. Shrubs become thornless, other plants find their niche and drop competitive advantages, other defense mechanisms such as alkaloids or other properties are dropped. All of this make the islands ripe for invasion by introduced species. The balance has been rattled and the birds tell this story