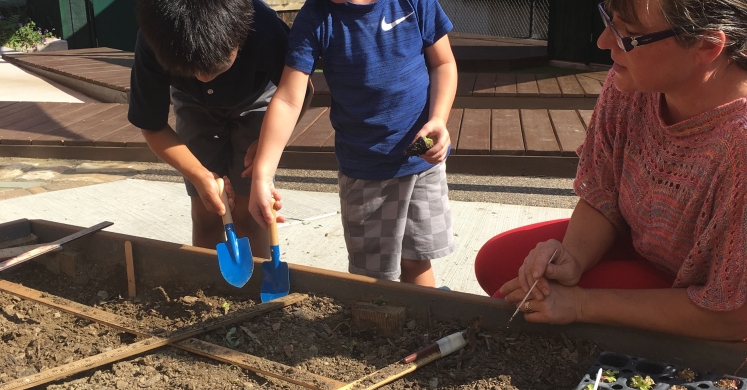 Holly Adams is an art and world cultures teacher at St. Edmund’s Academy in Squirrel Hill. She has been teaching for 20 years and has an M.F.A. in Ceramics from West Virginia University. She loves when she can watch classroom learning come to life outside.

Gardening has always been a part of my life -- from a childhood garden filled with tomatoes, peppers, and strawberries -- to growing an accidental sunflower garden -- to my first gardening efforts as an adult living on my own. I have always felt compelled to help things grow and this deep desire to create, tend and nurture inspired me to pursue the teaching profession. When the opportunity to reimagine and expand our school garden at St. Edmund’s Academy in Squirrel Hill came my way, I jumped at the chance to bring two of my favorite things together.

Working with children and tending a garden is a dream combination and I intuitively knew that magic would happen. After all, the simple act of putting a hard, dry seed in the ground and then watching it grow into a green, supple sprout feels like a small miracle in itself and is something I never grow tired of seeing. In addition to this project satisfying my intrinsic interests, I was also looking for a way to get my second graders excited about ancient cultures and thought the idea of exploring farming would be the hook to get them interested.

As the idea of the garden began to grow, our preschool teachers showed a strong interest in being part of this project. At St. Edmund’s Academy, an integral part of the school experience for all students is to work collaboratively with others and between grade levels. Pairing our preschool and second grade students gives the older students an opportunity to exhibit their leadership and the younger students friendly faces to look up to.

We spent our first class in the garden weeding and preparing the garden beds. We were so pleased to see our students being conscientious gardeners by constantly asking, “Is this a weed? How about this one”? During our next class, we were ready to plant both seeds and seedlings. This is when we had our first collaboration with the preschool and where the magic really started to happen – both in our garden and in the relationships being fostered.

The second grade students were amazing role models for our youngest students in the school. They were patient, kind and encouraging. I was particularly surprised with one paring between a second grader and preschool boy. The second grader is a child I had worked with since Kindergarten and is a child who would struggle with peer relationships, often having a hard time making friends and reading social cues. But in this situation, where he was the big kid helping out a little kid, I saw him shine and it nearly took my breath away. This child was kind and encouraging to his buddy. He spoke to him in a gentle voice, helping him use the garden tools, encouraging him the whole time, as well as engaging him in the process by asking him questions about what they were planting and how they should plant it. I saw this second grader become more grounded and attentive than I have ever seen him in the classroom.

In this moment, even though our garden was just beginning, the growing – and the magic – was already starting to happen. Our garden is well on its way now. In fact we will harvest lettuce and radishes in the next couple of weeks. The school cook will work his own delicious magic with our harvest and we will savor the first flavors from our garden that we grew together.