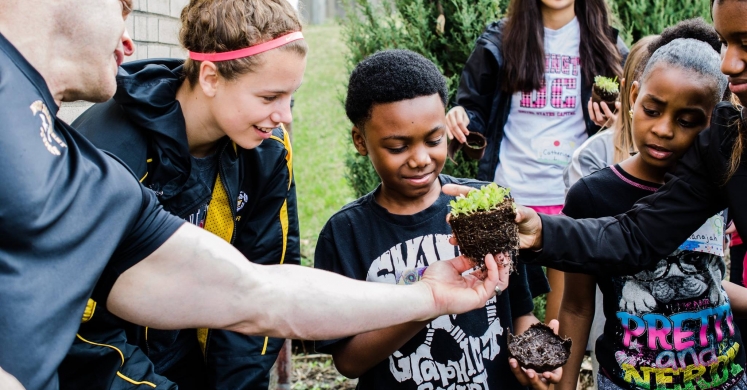 Grace Jin is a rising senior at North Allegheny Senior High School. She works as a reporter for Pittsburgh Youth Media and is a student leader of Youth Planting Change.

Only 15 miles separate Grandview Elementary in the city of Pittsburgh and North Allegheny Senior High School in Wexford. But to meet one another, the 130 pen pals involved in Youth Planting Change had to do more than ride a school bus. They had to cross a suburban-urban divide enforced by socioeconomic, racial, and political differences.

I used to go to a Pittsburgh public school where over 60 percent of kids qualified for free lunch. When I moved to North Allegheny, that number became less than 3 percent. I soon noticed the “bubble” that I lived in: suburban and inner-city kids rarely get a chance to learn or play together, and each side’s perception of the other is largely based on stereotypes, poverty statistics, or TV sitcoms. Without Youth Planting Change, these students may have never crossed paths.

The Youth Planting Change project is like a seed; watered by passionate individuals, it grew and blossomed over the past two years. In 2013, North Allegheny graduate Bret Anne Serbin won $1,000 from the No Child Hungry writing contest and decided to improve food-security through education. With the help of teachers Janellen Lombardi and Kathy Will, North Allegheny student leaders initiated pen pal partnerships with Grandview Elementary. On Earth Day, 2014, 60 students from both schools got together to do educational activities, learn about healthy-eating, visit the Mt. Washington overlook, and plant a schoolyard garden (which produced enough for everyone to enjoy a huge salad by the last day of school). Yes, the plants have been harvested, but the project had just begun.

This year, over 130 students are continuing the penpal partnerships. With generous donations from The Northern Allegheny Rotary Club, the Rockledge Garden Club, and Phipps Conservatory, the pen pals reunited in April and once again in May. They planted tomatoes, lettuce, peas, eggplants, carrots, radishes, and a variety of new seeds in the garden. The high schoolers provided reading, math, and science tutoring activities for the kids, wrote encouraging notes to promote success on the PSSA’s, and finished the day with long-lasting memories and a fun dance party.

Here are some reflections from the Grandview kids:

Larry: “I loved kickball. One reason is that we dominated the high schoolers.”

Gena:“My favorite part was the dance party and my favorite song was “Teach me how to Dougie.”

Kashmer: “I also really liked the story Ms. Baker read because it tells us how we can be anything we want to be.”

It is an understatement to say that Youth Planting Change was an eye-opening experience for students from both schools. My pen pal and BFF Keyon may have a different skin color or live in a different neighborhood than I do, but we have so much more in common: our love for reading, our skills of playing kickball and dancing the “Nae-Nae,” our dreams of traveling the world. Overcoming differences to understand the similarities: that is what Youth Planting Change is about.

Earlier this year, I submitted a proposal for an Opal Apples Youth Make a Difference Grant of $5,000. We are celebrating the good news that Youth Planting Change was chosen as a grant winner! We hope to make the most out of the support we’ve been shown by reaching out to community partners and inspiring others to plant seeds of change. With continued mentorship, the Grandview garden as well as the seeds of knowledge will grow and flourish in the future.