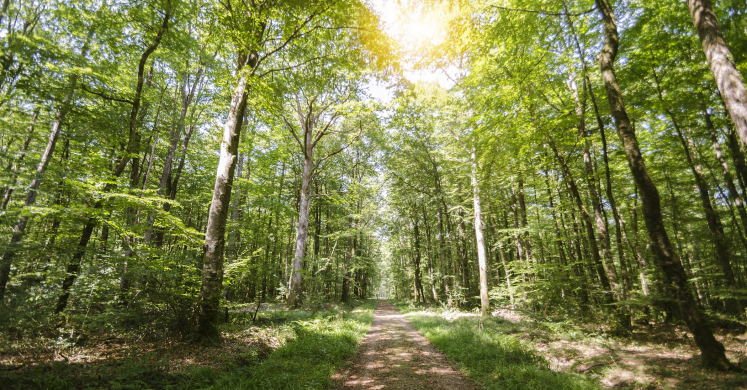 #bioPGH Blog: A Sunny Day in the Food Web

Can it be? Has sunny weather finally returned to Pittsburgh? It’s not just our rain-weary selves who are cheering, though - the sun is the master power source for nearly every food web on our planet. Whether an organism is a producer, consumer, or decomposer, we all ultimately rely on important processes that the sun powers. Grab your sunglasses, and let’s check this out!

When we think of photosynthetic organisms, we think of plants, since they are abundant and highly visible. However, there are a number of other organisms that use the sun to generate their own energy supply (remember, photosynthesis is the process of the solar energy powering the conversion of water and carbon dioxide into sugar and oxygen.) The organisms that have mastered this feat are broadly called producers – they produce sources of usable energy in a food web. Besides plants, algae undergo photosynthesis, along with a huge wide variety of single-celled organisms that don’t neatly fit into classifications. Also, a number of bacteria (called cyanobacteria) can photosynthesize. My favorite among these lesser-known photosynthetic organisms are diatoms—a quirky and diverse group of generally single-celled algae. They have silica-based outer “shells” that can be strikingly beautiful! Whichever you prefer – from trees to flowers to algae to my beloved diatoms – the food webs of the planet rely on these sun-loving organisms. 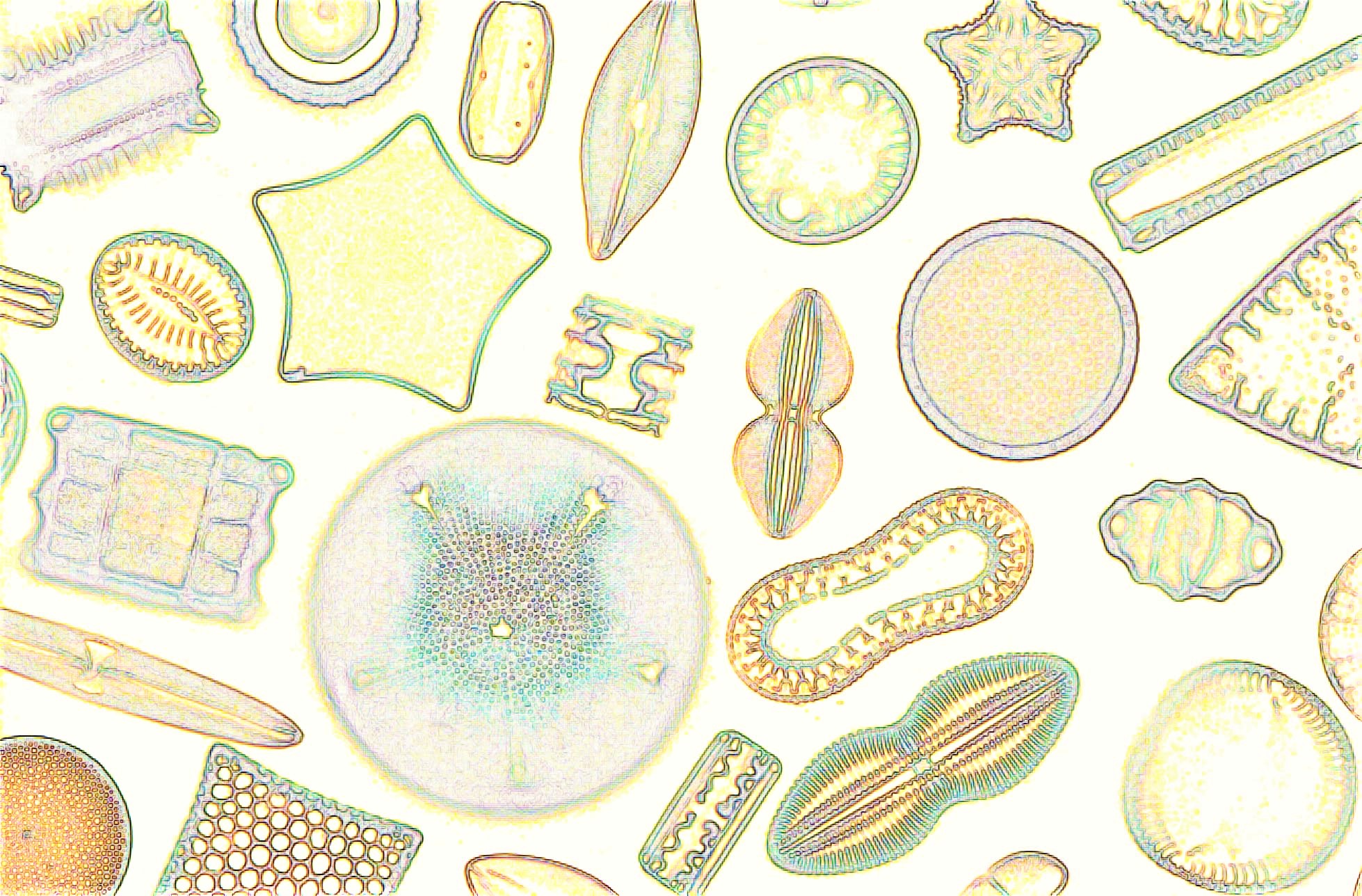 We may be tempted to view the dynamics of who-eats-what as a hierarchy, implied in the phrase “food chain,” but a food web more accurately describes the flow of energy. After our producers have powered their food production through solar energy, consumers can take advantage of producers as a food source. Consumers can be herbivores that eat solely plants, omnivores that a little bit of everything, or carnivores that are strictly meat-based. These relationships can be complicated, since some carnivorous plants could be considered both a producer and consumer, some consumers eat only producers, and some consumers eat both producers and other consumers. 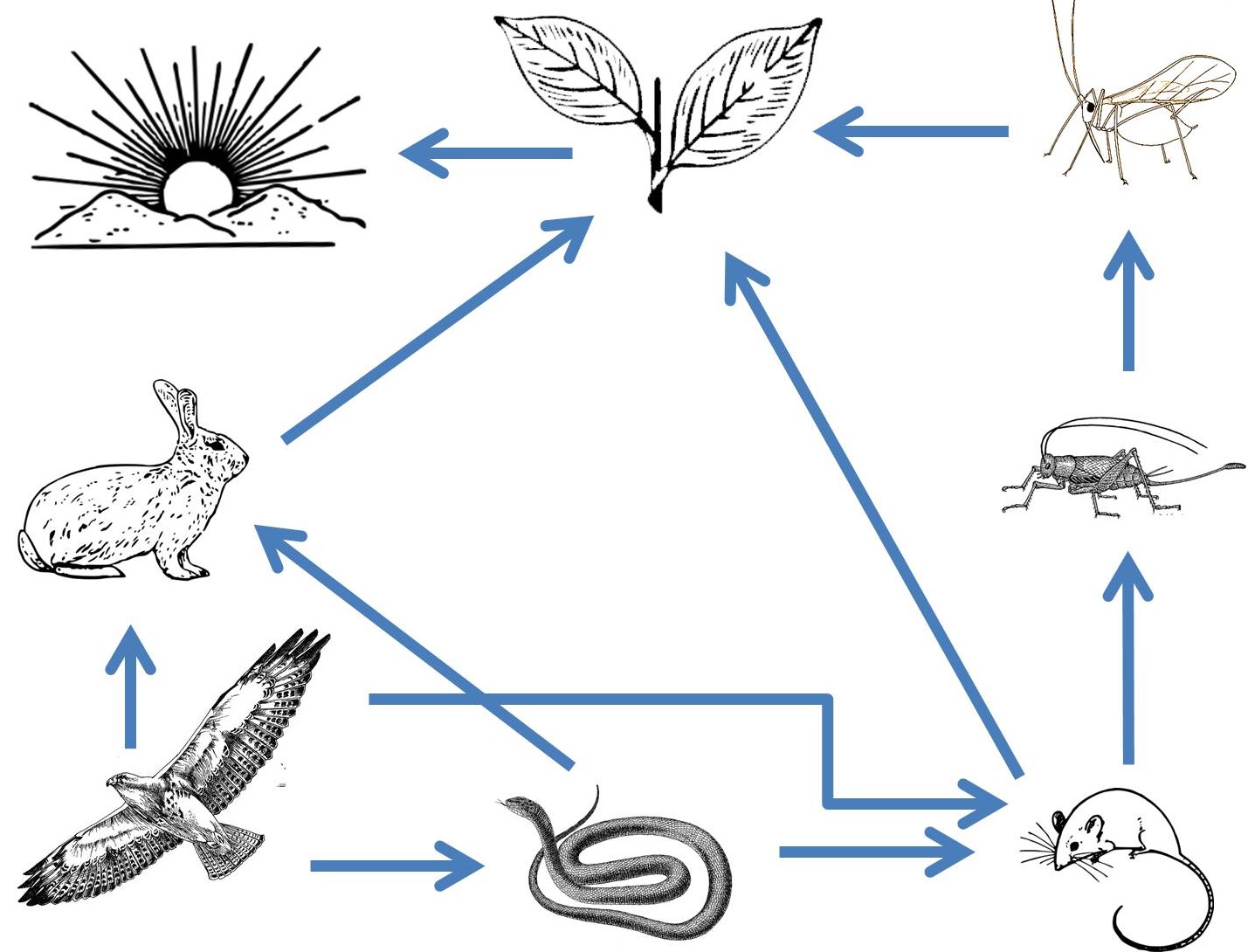 Broad example of the interconnections in a food web. Can you think of other species that are not represented here? What do they eat? What...eats them? Photo credit: assembled from public domain images.

I mentioned another group earlier called decomposers. Decomposers include everything from fungi to beetles to bacteria who break down the remains of previously living things and create a whole new feast of nutrients. It’s the perfect way to continue cycling energy throughout a food web. Those leaves that graced a maple tree all summer, and harnessed the power of sunlight to feed the rest of the tree, will quickly become food for soil bacteria and mushrooms in the fall.

In the end, we really can thank the sun for powering our planet. From the plants that directly use the sun to make food, to humans like us who make food of plants, we all truly rely on that brilliant star in the center of solar system. It’s just another reminder that in nature, everything is connected!

Connecting to the Outdoors Tip: The next time you go for a walk in a park or the woods, take a look at the plants, fungi, lichens, animals, etc around you - how are they all connected to each other? How do they all ultimately rely on the sun?

All the arrows in your food web example are backwards. They should be showing the flow of energy through the system. This is a common misconceptions with students!