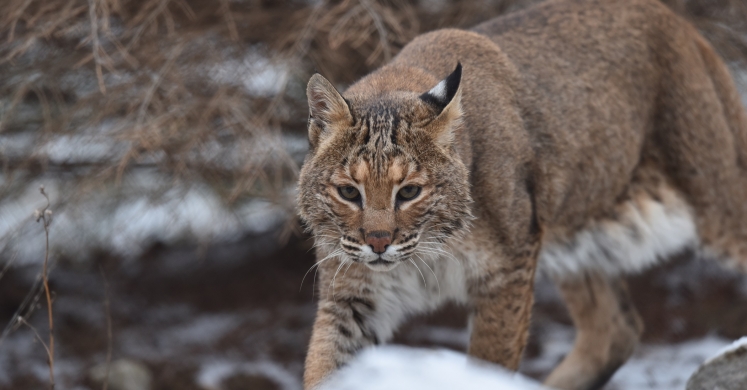 You’ve probably never seen one in the wild, but perhaps they have seen you on your hike through the woods, keeping a watch out from the distance — large ears perked, clear eyes unblinking, shoulders tensed to run, and a short “bobbed” tail held stiff with inquisitiveness. Pennsylvania is home to approximately 5,000 bobcats, but these secretive cats are elusive. Let’s see what we can learn about them, shall we?

Though bobcats look like large housecats, they are not exactly furry friends. Ranging from 15 – 35 pounds, these cats are muscular predators who excel at stalking their prey. As predators, bobcats are opportunistic and have been known to take down deer when necessary, but their primary prey include birds and small mammals like rodents or rabbits. They aren’t a concern to us humans, though; as with most wild animals, if you leave them alone, they will leave you alone.

Bobcats can be found throughout the continental United States and Mexico and even as far north as some parts of Canada (up that way, they encounter their larger cousin, the Canada lynx, though bobcats are able to outcompete them for food!). Throughout their range, bobcats have been able to take advantage of a wide variety of habitat types, from swamps to mountains and forests to suburbs. They have been able to adapt to quite a range of resources!

In fact, that ability to adapt has led to some interesting biology questions. Here in Pittsburgh, a local bobcat researcher is trying to untangle the genetics of bobcat diversity across the country. Jen Broderick is a sixth year Ph.D. candidate at Duquesne University, working in Dr. Jan Janecka’s wildlife genomics lab. When she’s not teaching anatomy and physiology, Jen is analyzing terabytes worth of DNA data from bobcats.

“The question I’m trying to answer is, 'What makes bobcat populations unique based on where they live?'” Jen says. “For example Pennsylvania is a very different state than Texas — different habitats, different climate — but bobcats thrive all over. I’m trying to find what’s in their DNA that helps them adapt to these regions.”

She goes on to note that some differences in bobcats across the country are easy to observe.

“Cats from further north are larger, for instance,” she explains. “But we’re looking for things that may not be as obvious. Maybe there are some metabolic differences in cats from across different regions as well.”

Jen is doing this by focusing on whole genomes — the collective term for all of an organism’s DNA.

“I have one bobcat genomic sequence from New Mexico, and for a north-south comparison, I have a population from Montana and Idaho, plus a southern population from around the New Mexico-Arizona area. And I have about 150 partial genomes from individuals across the country.”

Jen’s work is largely based in the field of conservation. Bobcats faced population declines from the late nineteenth and early twentieth centuries, largely due to a combination of habitat loss, unregulated fur trappers, and persecution from farmers. The 1970s, though, brought changes in management plans that have allowed bobcats to flourish again, and they have become quite common — though it is still doubtful that you will ever see one.

“We have camera traps at Powdermill Nature Reserve,” says Jen. “And we have seen cats on the cameras. But the folks checking the cameras have never seen one. Like other felids, bobcats don’t want to be seen and they are good at avoiding us.” 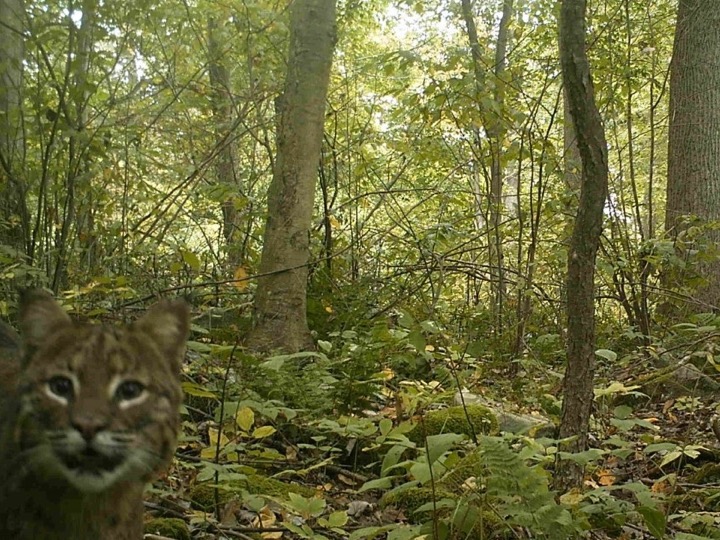 If you were to try to spot one in the wild, Jen notes: “Maybe a remote area, near a clear cut forest. They are habitat generalists, so they can really go anywhere, whether it’s distressed environments or Gateway Clippers!”

While her research is exciting as it is, but Jen notes that another valuable part of her work is the wildlife research community around her.

“I went to the annual Wildlife Society meeting last week, and the research was so great and varied. There were people tracking cats with collars, using {different genetics methods}, studying diet based on isotopes…so many areas of research working to better understand wildlife and conservation! It’s really cool.”

Connecting to the Outdoors Tip: Try exploring a county or state park this weekend! You may not see bobcats, but keep an eye for their tracks!