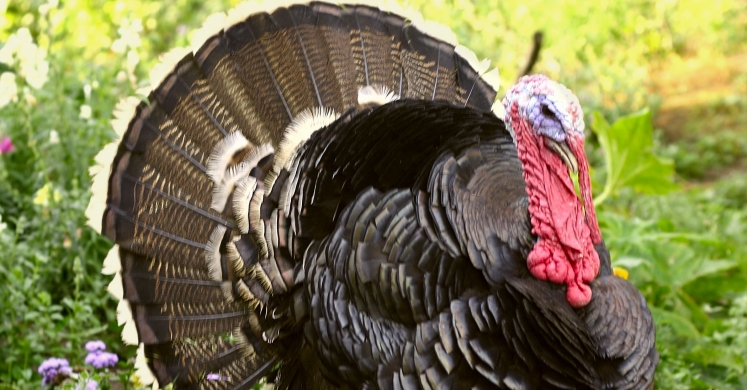 There is probably no animal more synonymous with November than the turkey. Meleagris gallopavo silvestris, otherwise known as the Eastern wild turkey, is one of five sub-species of wild turkey native to North America, and it is the most abundant and widely occurring of these sub-species. Eastern wild turkeys can be frequently observed strolling through local parks as well as neighborhoods throughout Pittsburgh, and are difficult to miss as they are the largest birds of the Phasianidae family. Despite their current abundance and wide range, during the 19th century populations of these birds were seriously depleted due to their popularity as a game bird and due to destruction of their habitat. However, thanks to successful reintroductions of wild turkeys throughout the United States and increased conservation efforts, wild turkeys have once again become a common occurrence throughout the country and can be found in nearly all 50 states!

Connecting to the Outdoors Tip: Did you know that turkeys can fly up to 60 miles per hour and roost overnight in treetops? If that isn’t impressive enough, wild turkeys also have better than 20/20 color vision and can turn their necks a full 360-degrees around! With such good eyesight, it’s no wonder why these birds have such beautiful, iridescent plumage. If you’re out and about preparing your yard for winter or putting up holiday decorations, keep an eye out for bird feathers. Consider collecting or observing the feathers you find, taking pictures or making drawings, and have little ones try to identify who they belong to. If you’re looking to do some crafting with feathers, natural bird feathers can also be purchased at several local craft stores. And remember, if you’re on your way to visit family and friends this Thanksgiving and are passing through a wooded area, keep an eye out towards the tops of tall trees for the silhouettes of roosting turkeys. And, while we’re in a particularly thankful spirit, consider having your family and little ones write what they’re thankful for on a turkey feather and each take turns playing “pin the tail on the turkey” for a fun after dinner activity. However you chose to enjoy your holiday this year, we here at Phipps wish you a wonderful one!