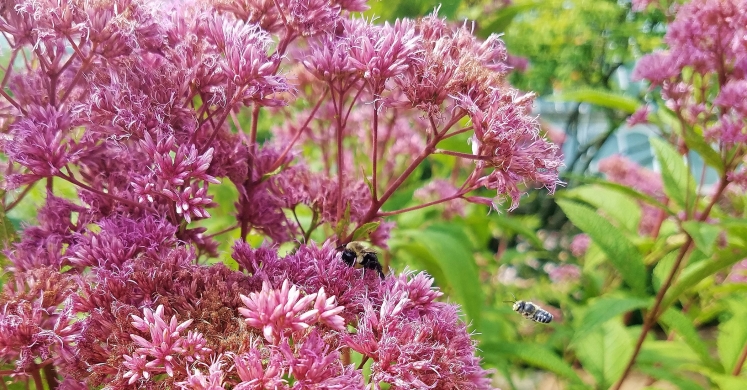 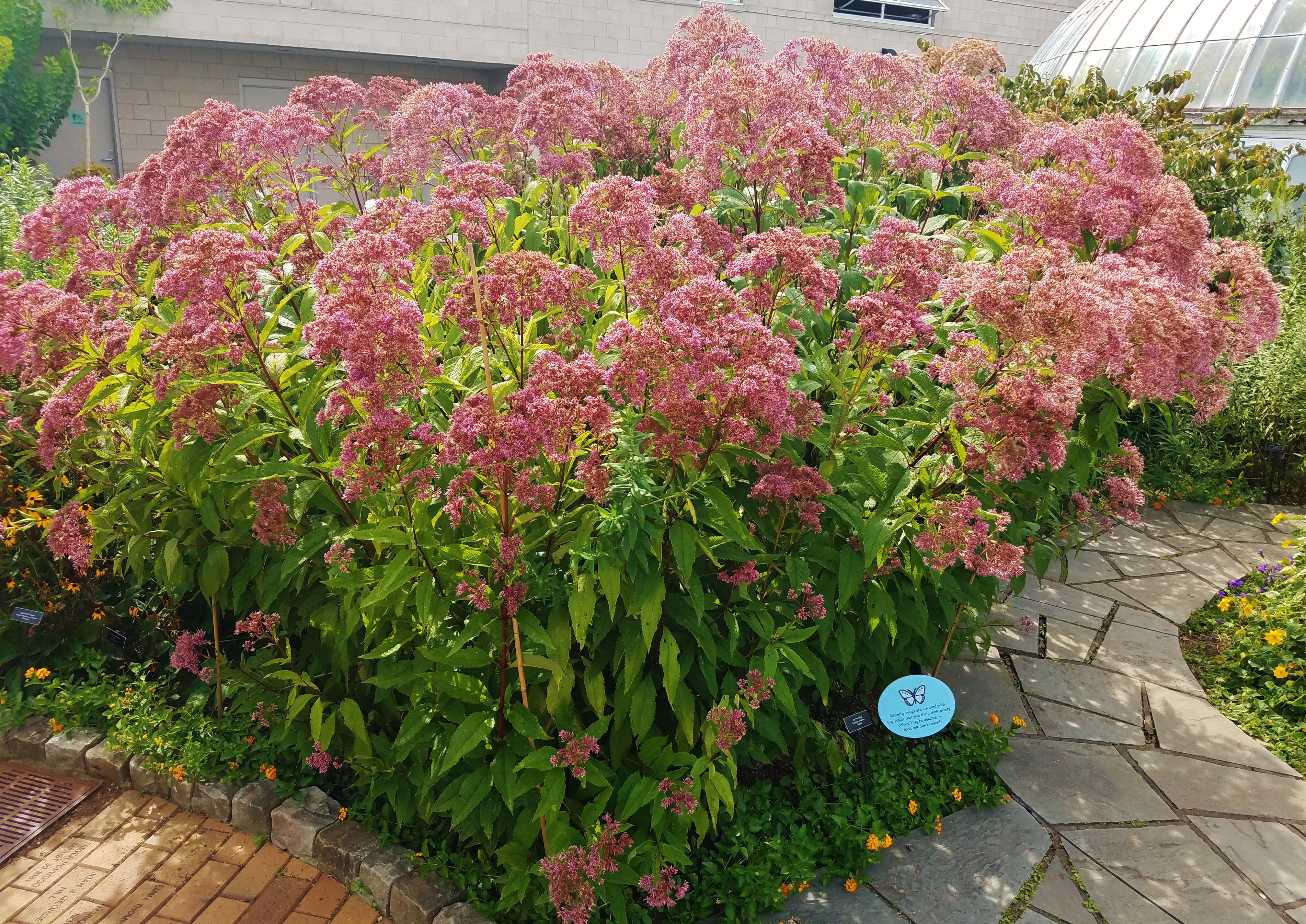 If you’ve ever walked into the Discovery Garden at Phipps during high summer, the sights and sounds are a sensory symphony. Water bubbles and spurts from a fountain, children’s laughter and footsteps create an energetic ambience, and pollinators buzz and hum around the colorful assortment of flowers that gloriously compete for our attention. And my eyes are often drawn to one of the tallest flowers in the garden—the joe-pye weed. With the tallest flower heads closing in on seven feet tall, the joe-pye weed is a feast for the eyes and attention. It’s buzzing with pollinator activity and the purple flowers are uniquely shaped, and the combined effect is that my eyes can’t stop taking in the scene. Interested in learning more about this native plant, plus its fascinating historical background? Let’s explore!

At Phipps, we have the spotted joe-pye weed (Eutrochium maculatum), but eastern North America is home a few species of joe-pye weed including E. purpureum, E. fistulosum, and some cultivated crosses that differ in traits such as shade or water tolerance, color, and height. This wildflower has risen in popularity in native gardening because it’s showy, attracts a wide variety of pollinators, and adds great height to a garden—plus it requires minimal maintenance and, importantly in Western Pennsylvania, it is even deer-resistant.

Joe-pye weed is a member of the Asteraceae family, along with asters, daisies, sunflowers, and coneflowers, among others. Most members of this plant family have what’s called a composite flower or a disk flower. Even though an individual daisy or sunflower might look like a single flower, they actually contain hundreds of disk florets and ray florets growing together in what’s called an inflorescence. If we zoom in on a joe-pye weed “flower” we can see it’s actually composed of dozens to hundreds of tiny individual flowers. 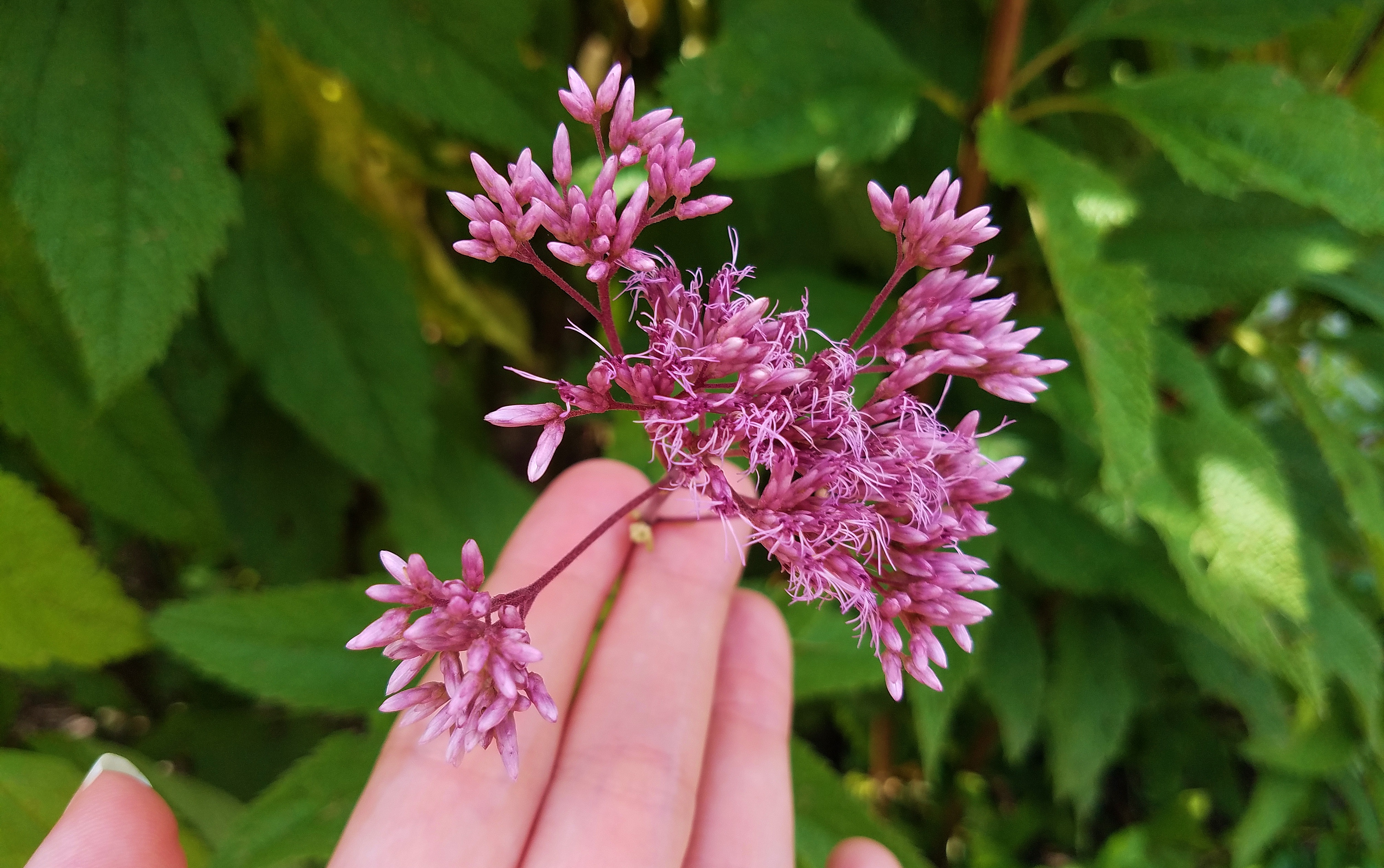 If you’re like me, you might have wondered about the name “joe-pye” weed. The name actually came from a New England legend of a Native American named Joe Pye (or Jopi, Japai, or Zhopai depending on who is telling the story). According to legend, he saved lives across Massachusetts in the late seventeenth century from dreaded typhoid fever with a concoction of his own, made from a tall purple flower that colonial immigrants were unfamiliar with—what we now call joe-pye weed. The few written accounts of Joe Pye contain a number of discrepancies, and few cite any sources beyond local story and legend. However, the handful of scholarly research projects that have tried to pin down the origins behind the name seems to point to a Mohican sachem and town selectman named Joseph Shauquethqueat, also known as Joseph Pye, born in Connecticut in 1722. Though there is no record to suggest he had particular training in herbal remedies, the Mohicans would have been knowledgeable about their local flora in general, and given that Shauquethqueat was well-known among the local white community for his role as a town selectman, it’s quite plausible that if he shared cultural knowledge about a given plant (like joe-pye weed), the settlers in his area would have named the plants in reference to him. And the name stuck.

So the next time you see this tall plant, enjoy the view and enjoy the namesake connection to the past!

Connecting to the Outdoors Tip: If you're in the Oakland area, there is joe-pye in the Sustainable Beds outside the front of Phipps and in the Discovery Garden. Besides the joe-pye weed, you'll see a delightful assortment of pollinators and flowers just in their high summer glory.