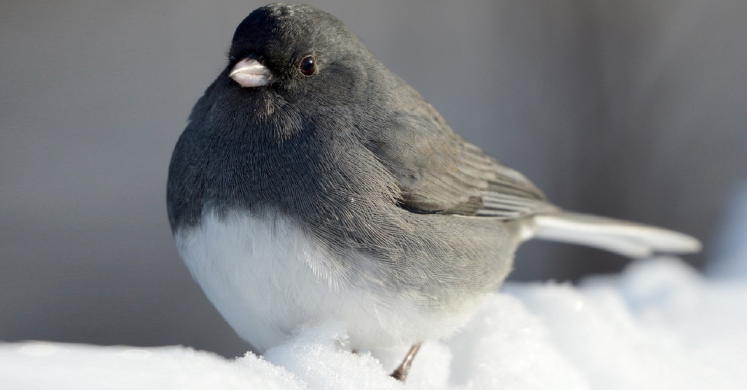 #bioPGH Blog: Juncos – When “South for the Winter” Means Pennsylvania!

When we think of birds flying south for the winter, we often picture our own birds heading to the tropics — the ruby-throated hummingbird, red-winged blackbirds, Baltimore orioles, sparrows, high-flying geese and so many more! For some birds, though, flying south for the winter just means avoiding the harshest of Canadian deep freezes and the accompanying food scarcity, and for those birds, going “south for the winter” might just mean…Pennsylvania! Of course, it can also mean Minnesota, Michigan, Wisconsin, or the Dakotas — it’s all relative, I suppose! We may not see ourselves as a winter destination for a feathered friend only the size a holiday bauble, but as we have noted here on the blog before, seasonal migration is focused on resource availability, not chilly weather. One of our “snowbirds” that I’ve seen quite often on the ground below my feeder is the dark-eyed junco.

Dark-eyed juncos (Junco hyemalis) are conspicuous little sparrows that tend to forage on or near the ground. On our side of the continent, their bodies are mostly a gray slate color with a light cream-colored underside (on the west coast, their bodies are tawny brown but with a gray head). Their primary diet items are seeds, which is probably why I see so many below my bird feeder during the winter. But during warmer months, they may include some insects in their diets.

What really intrigues me about our snowbird juncos is that they have some wildly fascinating migratory behaviors! Across the continent, there are some populations that migrate seasonally while other populations do not migrate at all; plus, in recent decades, some juncos have given up the traveling life for a permanent residency! On top of this, their migration destinations can also vary depending on whether the bird if male or female.

For example, Pennsylvania alone has a mix of migratory stories. Here in Western Pennsylvania, our winter juncos come down from Canada, and about three-fourths of the birds that stay all winter here are male. The females tend to keep going down to Southeastern US! It’s thought that perhaps the larger males are able to manage the colder weather more easily, or perhaps their need to find and defend nesting territories in the spring calls for a smaller energy budget for migration. However, a year-round population of juncos actually lives from the eastern part of Pennsylvania up to Maine, the Gaspe’ Peninsula of Quebec, New Brunswick, and Nova Scotia. They don’t seasonally migrate at all.

Outside of Pennsylvania, the migration stories are just as interesting. Other juncos from further north in Canada travel much further south — some will travel as far as Florida and others as far as Mexico! There is also a unique small population of dark-eyed juncos in southern California that only stopped migrating within the past thirty years. Rather than migrate back and forth between their breeding grounds (also in California) and non-breeding grounds, the birds have moved permanently into their non-breeding grounds. Similarly, a small population that used to travel between Ohio and Canada now seem to staying in Ohio year-round.

Well now, for a small bird that maybe catches some seeds before hiding quickly in the shrubs at my presence, they have a fascinating story just like everything else I have come across in nature! Hope you enjoyed learning more about them, and be sure to keep an eye out for them for the next few months before they are gone for the season!

Connecting to the Outdoors Tip: Juncos usually stay near to the ground, they even nest on the ground! If you are looking to spot one, keep on eye lower in shrubby brush near wooded areas.

Cornell Lab of Ornithology - How Juncos Changed Their Migration, Behavior, And Plumage In A Matter Of Decades

Hi Elaine! Thank you for reading! The Macauley Lab from Cornell has a great library of bird calls. Their junco collections are below:

I have many juncos visiting my platform feeder on the railing of my deck. They love the black oil sunflower seeds. LOVE to watch them wiggle through any accumulated snow to find the seeds! Usually solo feeders.