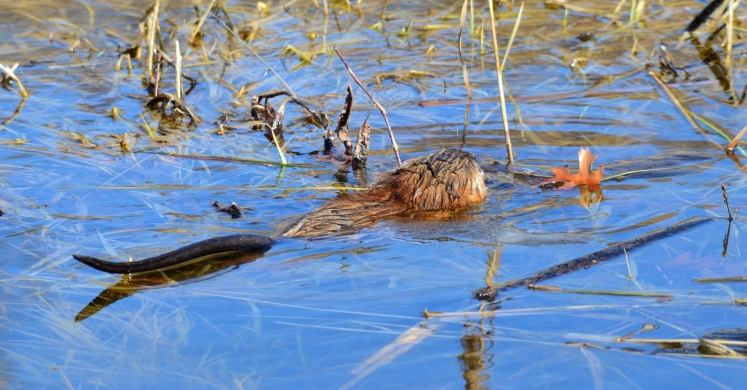 While participating in my annual Audubon Christmas Bird Count this past weekend, I was excited to spot a large dome-shaped lodge made of plant materials just off shore in a pond. Some of the vegetation around us, as well as a number of small trees in the area, bore distinct chewing marks. When we think of large rodents that build lodges in ponds and eat bark, we tend to think of beavers; but our local muskrats, Ondatra zibethicus, are another kind of local ecosystem engineer (what’s that? read on!) who build lodges and modify their habitats as they carry out their days. Weighing only 2-5 pounds, these semi-aquatic mammals are much smaller than their cousins the 50-70 lb beavers, but they are just as active and industrious –occasionally even making a nuisance of themselves through their determination. 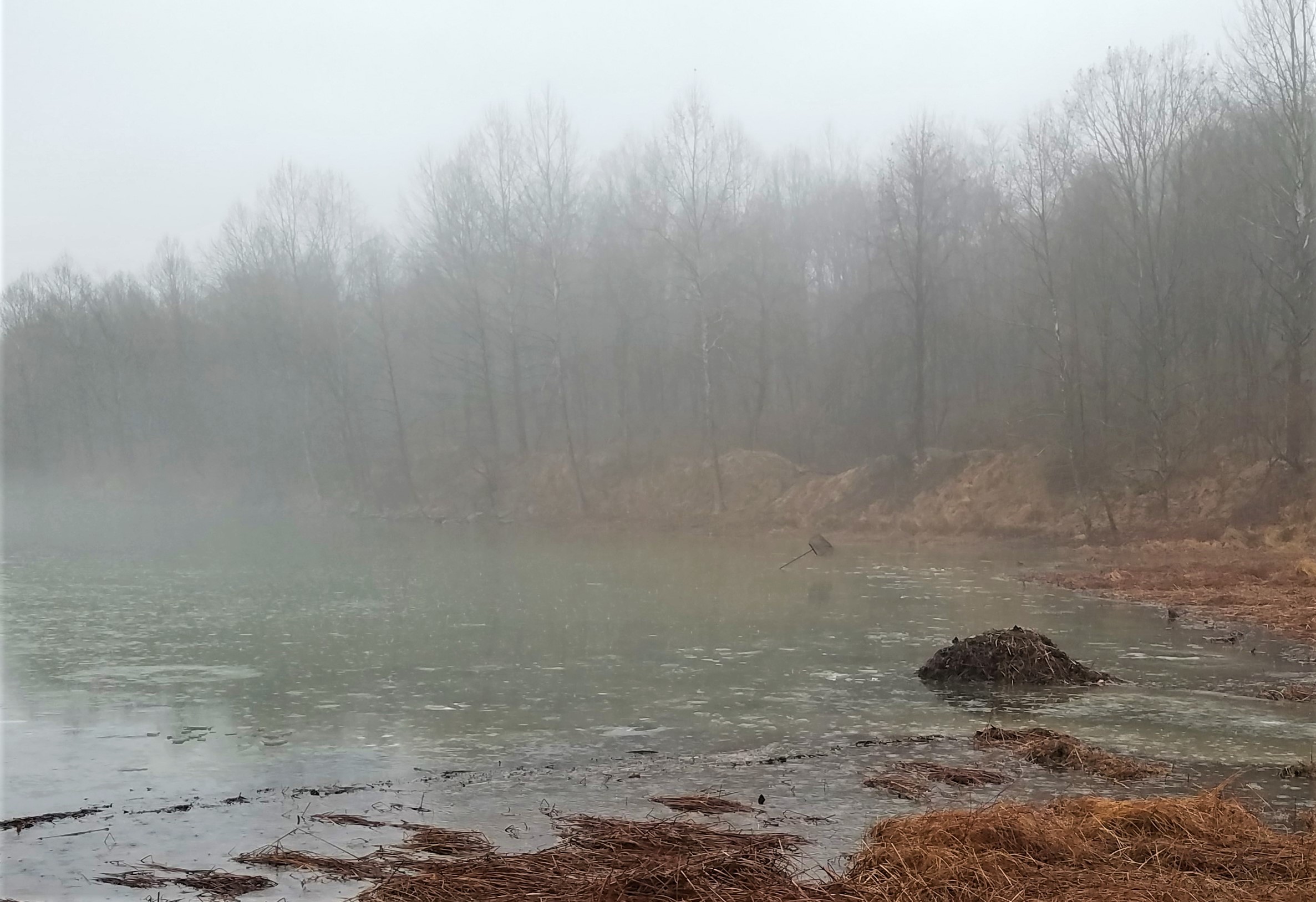 The muskrat lodge is the domed mound on the right.

It may be easier to spot a muskrat lodge than the actual muskrats. Muskrat lodges, typically built in wetlands and ponds, are domed structures constructed of mud and plant materials (often cattails) that usually reach 2-3 feet above the water. The entrance to the lodge is underwater, and some lodges can be as wide as ten feet in diameter! Inside the lodge, the floor plans vary: there might be a single living room with a few small spaces branching out from the main room, or the lodge might even have multiple separate chambers. I should note, though, that muskrats are also known to burrow into banksides rather than build a lodge. They are a creature of many talents!

When not working on their lodges, muskrats are, let’s say, “enthusiastic” foragers. Their normal diet includes wetland plants like pickerel weed, water lilies, and rushes plus young tree bark, but they might also eat some fish, crayfish, or other macroinvertebrates (this is another distinguishing factor from the herbivorous beaver.) Since they are rodents, their two front incisors never stop growing, which gives them impressive dental power to crunch through tough materials. Muskrats have been known to clear dense vegetation in marshes and wetlands, which can be problematic when they encroach on agricultural or cultivated areas.

This ability to clear vegetation is how they earned their title as ecosystem engineers. The term ecosystem engineer refers to an animal that can change their local habitat somehow – like a beaver damming a stream and ultimately creating a wetland because of the dam. Muskrats’ effects on the landscape tend to be less dramatic than beavers since they don’t build dams, but their own foraging and building behaviors can definitely modify a pond or wetland. They actually have been known to change the composition of aquatic plant communities near their lodges as they preferentially select certain plants for building and eating.

In closing, one last interesting tidbit about muskrats is how they received their name. Since they are rather rat-like in appearance, “rat” made it into their name; but muskrats can also produce a potent-smelling musk. Thus…the muskrat!

Connecting to the Outdoors Tip: If you check out iNaturalist, a muskrat has been spotted at the Point downtown, but you can also look up where muskrats have been seen closer to your neighborhood!

Higgins and Mitsch: The role of muskrats (Ondatra zibethicus) as ecosystem engineers in created freashwater marshes

Love muskrats. They have several lodges that can be easily seen in the little pond by the eagles nest shelter in north park. I once spotted one coming out.

I have a muskrat tunneling through the snow in order to eat the grass on my front lawn.