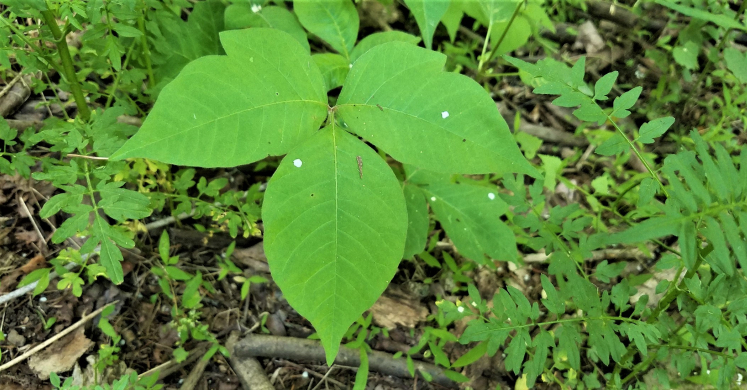 What has three leaves, can grow as a vine or a small shrub, and makes many of us itchy?

If you guessed poison ivy, you are correct! And guess what I found growing on the hillside above my backyard? Over the past several weeks, I have been excitedly planting wildflower seeds and trying to tackle the garlic mustard, but early last week I noticed a classic combination popping up throughout the hillside (see picture below). 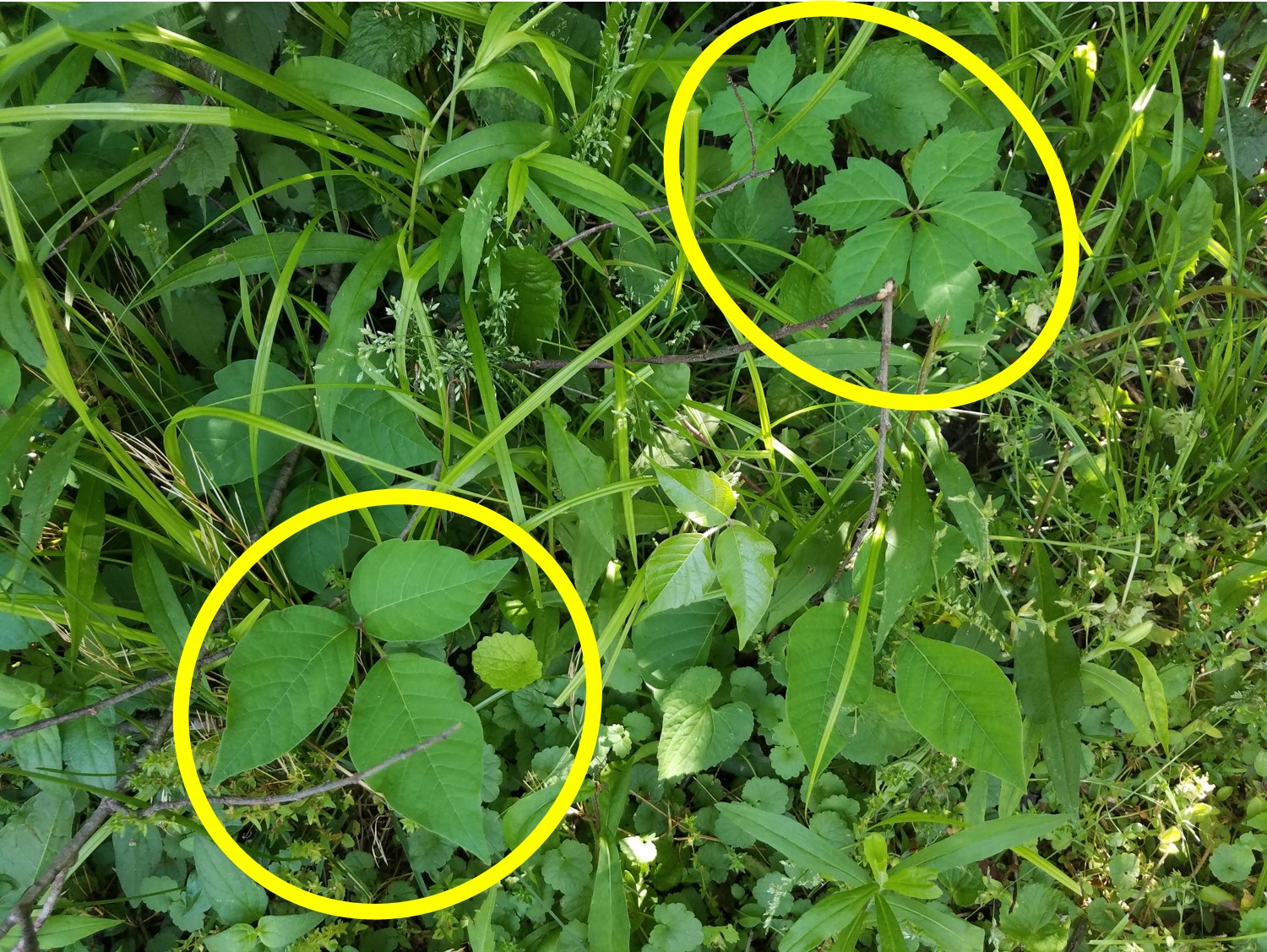 Top right, Virginia creeper; bottom left, poison ivy. The two frequently grow alongside each other in plant communities—often with jewelweed as well.

Eastern poison ivy (Toxicodendron radicans) is a common perennial that can be quickly identified by its three leaflets. A compound in the plant’s sap called urushiol causes an allergic reaction of varying degrees for most people who come in contact with it. (Intriguingly, this is the same compound in mangoes that can elicit an allergic reaction — they are both in the family Anacardiaceae.) When poison ivy grows as a vine, it can be identified by the “fuzziness” of the vine; that “fuzz” is actually comprised of small aerial rootlets! Just be mindful of the vine — it contains urushiol, too.

As itchy as we may get just thinking about it, urushiol actually was not a defensive adaptation of plants, or at least it was not an adaptation to prevent herbivory (animals eating the plant). With the possible exception of a few other primates, mammals can touch and eat poison ivy with no ill effect, not to mention birds enjoy the berries. Thus, it has been hypothesized that urushiol acts as a defense against microbes. Indeed there have been a number of studies that look at the antimicrobial properties of urushiol derivatives. Perhaps this itch compound will be useful in the future!

The biology is fascinating but the presence of the plant in my backyard is still tricky. I have never personally reacted to it (which could change, as many peoples’ sensitivity to it can change throughout their lifetime), but my husband reacts quite badly. We also have neighbors with small children, and I would hate for them to run into it while playing. To get a better idea of my options, I checked with two of our horticulture staff, Gary Worthington and Jess Horenstein. They agreed it was a tough situation —it is a “nuisance” plant, yes, but a native plant all the same, with value in our local ecosystems.

“Some wildlife actually feed on it,” noted Gary. “In a time when so many of our native plant communities are being overtaken by invasive species, avoidance, rather than removal, might be the best strategy where allowable. It has some of the most beautiful fall color! If it weren't noxious, I think we might actually grow it as an ornamental plant.”

They also noted that when dealing with poison ivy on site, “When it comes to larger plants or patches, because of the risk of exposure, this is one of the only instances where we [use] herbicides.” If you find yourself in a similar position, check out Phipps’ guide on herbicides which helps you determine what to look for and what to avoid!

Well, I admit that I will probably try to remove the poison ivy at least along the path up the hillside. However, I do agree with our horticulture staff — all of nature is interconnected and I want to be sure I am a good neighbor to the wild residents. Perhaps I can reconcile that with promoting as many other native plants as possible!

*Note, if you do pull poison ivy from your property, be aware that urushiol can remain potent for extended periods of time — the compound can survive for years on surfaces such as door knobs and shoes. Also, be sure never to burn poison ivy as the compound can be a dangerous irritant if inhaled.

Connecting to the Outdoors Tip: When it comes to itchy plants, we've heard the saying "leaves of three, leave them be." This saying can also be applied to poison ivy's Western US counterpart and poison oak. A quick sigh of itch-relief is that Pennsylvania isn't home to poison oak, and another oft-named offender posion sumac is relatively rare in the state and tends to be found in wooded swamps. So enjoy the ourdoors, just being mindful of where that poison ivy might be.