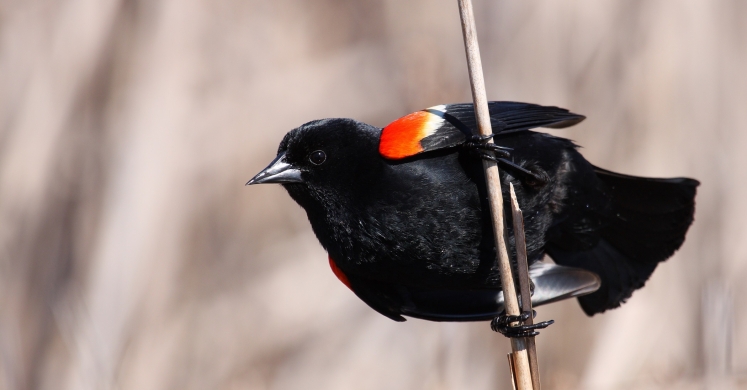 We heard them before we saw them—their signature call with three questioning notes before a harsh trill. After pausing a moment to follow the sounds, we realized that the red-winged blackbirds we heard were spread out across the low, sloped hillside emerging from the trail at Duck Hollow. All males, they each staunchly defended a tree or flew at another male that perched on a tree they wanted, and their antics created quite a spectacle. We were on a birding walk this past Sunday morning with local birder and blogger Kate St. John. Though all of us had heard or seen plenty of red-winged blackbirds before, the magic of Kate’s walks is that there are no “ordinary birds” and “exciting birds.” There are simply birds, each species unique and intriguing in their own way.  On this particular day, the red-winged blackbirds intrigued me more than I had ever realized.

The first thing that caught my eye…well, ear… was that even though red-winged blackbirds weren’t the only birds we saw that day, they were certainly the most vocal—and for good reason this time of year! The male red-winged blackbirds were staking out nesting sites, one of their most prized assets for attracting a female mate. Males with the best nesting sites have the best chance with the females; thus now before the females arrive, it’s game on for a good spot. Males return from migration earlier than the females specifically to scope out and claim a territory.

Aside from their very vocal tendencies, one of the most distinctive features of the red-winged blackbird is their bright red and yellow shoulder patches, called epaulets. The females, a more mottled brown color than the dark males, also have very faint epaulets, but they are far less noticeable than those of males. The reasoning behind the bright flash of color has been the focus of quite a few studies. The original hypothesis was that the color attracts females (the more brightly colored the male, the healthier he is, and thus a female might be more interested), but some studies have actually dyed the bright feathers dark and found no decrease in mating success for those males. However, more brightly dyed feathers seem to impact territory acquisition, though. Males with dyed feathers had  more to defend their territories from more invading males than the non-dyed males did. This suggests that their famous bright coloration might be a male-male competition trait rather than a trait to impress the females. (For future ornithologists out there, some of the data is still a bit of a mystery - so it's a good direction for more research!)

If you’re interested in seeing a red-winged blackbird, they are typically wetland birds, and can be seen observing the world from a sideways perch on a cattail. They can be found short distances from wetlands or low areas near bodies, or in somewhat wooded areas, though they are not usually associated with forests. Males are the most visible, keeping watch for intruders to the territory and scolding anyone who comes too close. The females are less likely to be out in the open, and tend to stay low in wetland plants or in foliage.

Connecting to the Outdoors Tip: If you’re interested in going on a guided birding walk Kate St. John, you can look them up on her website. She will also be leading the birding walk at this year’s BioBlitz on June 10.

Smith 1972: The Role of the Epaulets in the Red-Winged Blackbird, (Agelaius Phoeniceus) Social System

I loved this information! We have ten acres of low lying woodlands, with a stream that runs through, and above a 200 ft. hedge of mature arborvitae that is full of the singing red wing blackbirds for a week to ten days in early spring.  I always love to hear them come, I know they will bring spring days!  Now I know what they are really singing about~