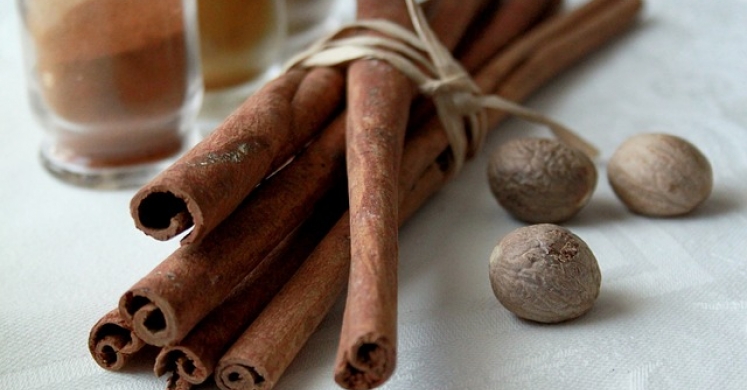 The holidays are here, and winter flavors abound: cinnamon, ginger, chocolate and chai!  All are delicious and all the flavors come from plants!

Take the time to search out your favorite flavors.  Cinnamon is sold in whole quills (shavings of bark!); ginger is sold fresh as a whole root in interesting shapes.  Different chocolate flavors are sold in stores, some are dark chocolate, and others are milk chocolate with a number of different spice mixtures.  Chai is a fun one to investigate.  Many of the spices used in chai come in pod, seed and stem form, a delight for the nose as well as a botany lesson.  Try and identify the different spices in chai tea!  We see these flavors in holiday dishes and drinks so let’s get to know the flavors!

Chocolate comes from trees!  Pods containing cacao beans grow on the cacao tree, Theobroma cacao.  The beans are fermented, roasted and ground into chocolate.  However, the beans do not taste good alone.  In fact, the taste is quite bitter!  Cacao beans need help from other plant friends to make chocolate taste delicious!  Cacao beans are often mixed with many different plants such as chilies, vanilla, cinnamon, coconut, and sugar to make wonderful chocolate treats!

Ginger, Zingiber officinale is a tangy spice most commonly used in baking and in flavoring beverages.  This spice comes from a rhizome or (underground stem).  The long plant stocks and grass like-leaves of the ginger plant sprout directly from this root-bearing rhizome.  The finest ginger grows in the tropics, particularly in India & Jamaica.  Ginger is used fresh, dried and pickled to flavor many Indian and Thai dishes.  Historically, gingerbread was made with breadcrumbs, ginger, honey and a variety of spices such as anise, pepper, cinnamon, and nutmeg.

Chai is actually a century old drink founded in India.  It contains spiced milk and tea.  It is generally made up of rich black tea, heavy milk and a combination of various spices.  The spices used vary from region to region and among households in India.  The most commonly used spices are cardamom, cinnamon, ginger, cloves, and pepper.  Indian chai produces a warming, soothing effect, and acts as a natural digestive aid!

But don’t forget about Herbs!

Herbs are used widely in holiday dishes and drinks.  Some of the usual suspects are rosemary, basil and mint, all of whom can be grown in a container on your porch.  At the end of the growing season, extend the taste of those fresh herbs by cutting and freezing them in ice cube trays.

This provides an easy way to store herbs for that holiday turkey, stuffing or delicious herb infused beverage.

Freezing methods include using water or olive oil, depending on the herbs use.  The ratio is 2 teaspoons of your selected herb to 1.5 teaspoons of water or oil.

For more information and recipes for herb-infused drinks for the holidays and beyond, you can explore this site!