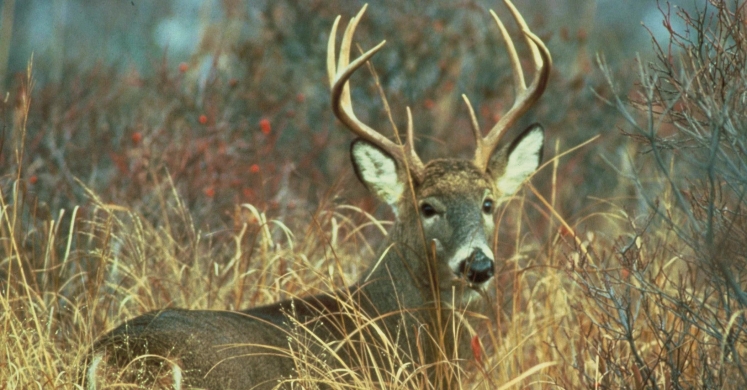 One evening this week, as my car rolled up the ramp to leave Schenley Park, he looked up my direction and froze — ostensibly calculating in which direction to bolt. I could feel myself tensing. Cars were behind me and he seemed poised to run in front of me, his large antlers nearly blending in with the background branches of the park. Then suddenly, quick as a blink, he turned and ran away from the road. I let out the breath that I had apparently been holding in during the encounter and made my way home.

Pennsylvania is certainly no stranger to white-tailed deer! Even in the greater Pittsburgh area, from the North Hills to the Southside Slopes, and from Lawrenceville to the West End, deer can be spotted in almost every neighborhood. This time of year, deer are particularly active, and the males especially have thrown caution to the wind. As a result, the month of November is statistically the annual peak of vehicle collisions with deer in Pennsylvania. Why is that? one might ask. Short answer: breeding season.

Also known as the “rut,” the breeding season for our white-tailed deer tends to peak in early–mid November. During this time, bucks experience elevated testosterone levels and generally behave with much less caution than the rest of the year. Males may spar with one another to discourage competitors or otherwise display to attract female attention. They also make heavy use of “scrapes,” territorial markings that involve scraping their antlers and scent glands on tree limbs while scraping and pawing away at large areas of ground and urinating on them. In addition, because they are in active pursuit of receptive females, bucks’ diets will sharply decrease as they sacrifice feeding for search time. As a result, since their activity levels are still unusually high, males tend to emerge from the rut exhausted and with as much as a 30% decrease in body weight.

From the female perspective, breeding season is a much shorter time frame and is characterized by a combination of increased hormones, such as luteinizing hormone, progesterone, and estrogen. She won’t be in estrus (ready to breed) until the hormones are all at required levels; but once females are in estrus, they give off a scent that alerts males that they are receptive to breeding. Each female is generally in estrus only for a few days in the fall.

This high-energy season usually calms down by December, and until then, we can keep an extra watch out for those “distracted” males when we drive. The most likely times to expect deer are at dusk and dawn. Deer are crepuscular, meaning they are most active at twilight, as opposed to nocturnal (active at night) or diurnal (active during the day). Notably, when you see one deer run across the road, our instinct is to watch where that deer headed. However, when driving, it’s also good to check the direction where the deer came from since, more than likely, there are more deer that could follow.

All of this wildness pays off by spring, though, when the next generation of fawns is born. Fawning season begins for most of Pennsylvania around May. So for now, keep an eye on the roads, and be ready for baby deer next year!

Connecting to the Outdoors Tip: White-tailed deer are truly lovely creatures; but, admittedly, large populations have made a nuisance out of them in some areas. If you have been having trouble gardening because of deer, check out Phipps’ annual list of sustainable plants, many of which are selected for the deer-resistance.

PA Game Commission: When is the Rut in Pennsylvania?