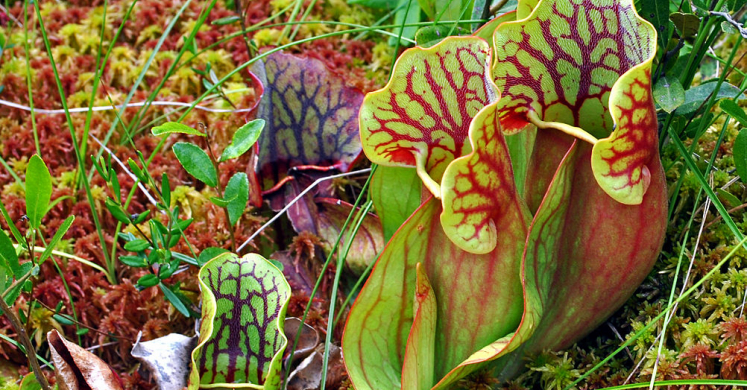 #bioPGH Blog: The Plants with a Bite!

The plant kingdom is a wild and diverse place. On one stem, we have delicate little buttercups, regal roses, and delightful dahlias. But then, on another stem, we have the chomping “bite” of a Venus fly trap, the alluring cobra lily, or the massive Nepenthese rajah of Borneo—a carnivorous plant occasionally large enough to swallow a rat. Yes indeed, the plant kingdom boasts predators that are wildly efficient despite their firmly planted roots. Pennsylvania is home to at least fourteen species of carnivorous plants; let’s explore our vicious vegetables, shall we?

Most carnivorous plants live in areas that lack readily-available nutrients or areas with intense competition for resource, highlighting the reliance on carnivory to fill nutritional needs. However, carnivorous plants have different ways of managing their prey acquisition.

One of Pennsylvania’s native carnivorous plants, the roundleaf sundew, preys on small arthropods such as insects and perhaps a spider or other arachnid here and there. To catch prey, the literally round leaves of roundleaf sundews are covered in trichomes—tentacle-like extensions coated in drops of a sticky, sugary solution at the ends. This works in a similar way to a flypaper trap. Capturing an insect in these trichomes triggers the release of a cocktail of enzymes to “digest” the arthropod, which allows the plant to absorb nutrients such as nitrogen from the disintegrating bug.

The purple pitcher plant, on the other hand, has a different way of catching dinner. Within the “pitcher” created of leaves, the plant produces an enzyme-laden liquid cocktail that will digest many different kinds of arthropods that come in for a landing. (The digestive fluids aren’t a problem for all insects—a few species even spend a portion of their life cycle living in pitcher plants!) More recently, research has focused on the mutually beneficial relationship of bacteria within pitcher plants’ fluid. Though the water within the leafy “pitcher” contains digestive enzymes ready to break down an arthropod dinner, the presence of bacteria can help reduce the surface tension of the water (decreasing the odds of a buggy escape) and help break down the prey items even more than the plant itself.

Pennsylvania’s other group of carnivorous plants, the bladderworts, also have a very different acquisition strategy. Bladderworts are free-floating aquatic plants often found in the same wetlands and bogs as the other two carnivorous plant species. Their namesake “bladders” are actually tiny underwater pockets with hair-triggered trap doors. When a microscopic prey item (some sort of zooplankton—tiny floating invertebrates) swims close enough to the hairs, the trap door opens, and the resulting pressure gradient sucks the prey item inside. Once the door is closed, the pocket fills with digestive enzymes to break down the food. 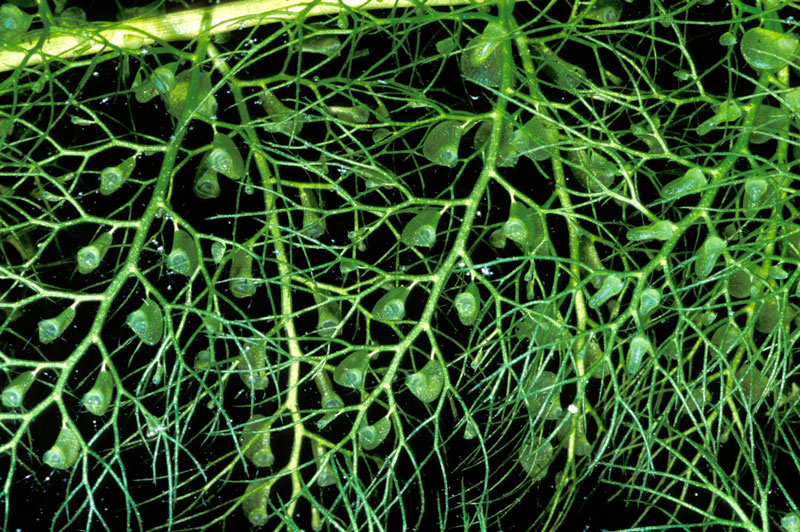 Though their methods of catching prey may differ, they all benefit from a combination of digestive enzymes to break down their food; but what are digestive enzymes? Enzymes are a special category of proteins that can break down different kinds of molecules. Conveniently enough, classes of enzyme are named after what it breaks down, thus if we name the types of enzymes commonly produced by carnivorous plants, we can get an idea of what those enzymes are doing to bugs: proteases break down proteins, nucleases break down the components of DNA (or RNA), amylases break down the sugar amylose, glucanase breaks down another type of sugar called glucan, chitinase breaks down chitin (the material that largely makes up insect exoskeletons), and a few other enzymes depending on the plant. Working together, a combination of enzymes does the trick!

Well now, the plant kingdom is diverse indeed—these three different groups of plants all developed different yet comparable ways of responding to a nutrient-poor environment. Nature is wondrous; we just have to keep exploring. And in the meantime, enjoy Sir David Attenborough sharing about some truly wild carnivorous plants!

Connecting to the Outdoors Tip: All of Pennsylvania’s carnivorous plants can be found around wetland or bog areas. If you are interested in seeing them out in nature, do be careful to disturb as little of the habitat as possible and stay on trails or boardwalks when available to avoid disturbing a sensitive habitat type. The PA DCNR cautions “Bogs and associated peatlands are very susceptible to disturbance and can easily be ‘loved to death’ by plant enthusiasts tramping through them. The best way to view [carnivorous plants] is at parks and nature preserves where boardwalks have been installed to limit the impact by visitors.” If you aren’t near a bog or fen, maybe trying growing aquatic plants like bladderwort at home. This resource can walk you through how to get aquatic plants started in an aquarium. And don’t forget that you can many kinds of carnivorous plants right here at Phipps!