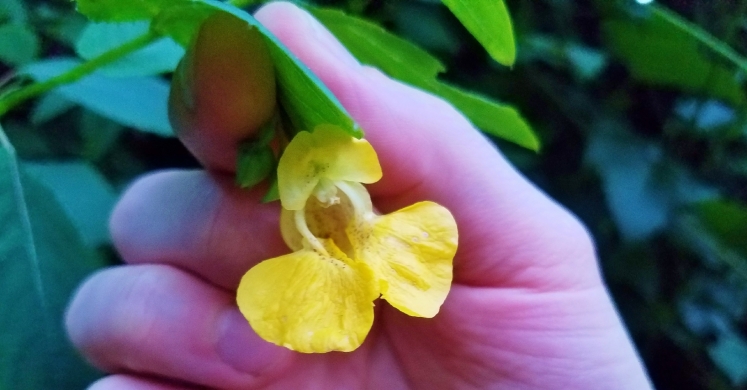 While assisting with some field work years ago, I discovered that our native plant jewelweed is just as useful as it is eye-catching. Minutes after carrying a heavy load of equipment down a brushy hill to a stream bank, I noticed the tops of my arms were radiating an odd burning itch, and tiny red welts were starting to form. I turned back to look at the hillside: stinging nettle—an invasive plant from Europe and Asia. It’s not dangerous, but the next few hours would be uncomfortable until the reaction was over. Luckily, right next the patch of stinging nettle, a colleague pointed out a much friendlier plant that would relieve the stinging: jewelweed! I discovered that morning that jewelweed sap at least partially relieved the irritation from the nettle. Conveniently enough, jewelweed has similar habitat requirements to stinging nettle and a few other irritating plants, and can often be found nearby. It seemed there was more than meets the eye to this pod-popping plant with bright orange flowers. Let’s explore!

Jewelweed is a native North American plant that is a part of the impatiens genus (Impatiens; a relative of the impatiens that grow in our yards). The individual plants grow closely together and can be several feet tall, forming a long row of dense bushes. Preferring partially shady areas with damp soil, jewelweed can be found along many of Pittsburgh’s hillsides, parks and neighborhoods; and their orange or yellow flowers are pollinated by hummingbirds, bumblebees, butterflies, or other insects. There is indeed evidence to suggest that the sap of jewelweed can help manage reactions to some skin-irritating plants, though products touting the “extract” of jewelweed seem to be less effective.

While many of us are familiar with jewelweed’s bright, showy flowers, they also produce a much smaller flower that never actually blooms. This flower self-pollinates and produces its own seeds, but the plants from these seeds won’t be as hardy as those originating from the main flowers. Researchers aren’t positive why the plant would need these two kinds of flowers, but the dominant hypothesis suggests that the plant is ensuring the ability to reproduce even in tough environmental conditions. Less energy goes into the growth and maintenance of the smaller flowers and their seeds, which explains why the plants derived from these seeds are less hardy; but ultimately, the lower energy cost ensures that the plant can still produce seeds even in stressful situations like droughts. Other possible suggestions for why plants would need the ability to both self-pollinate and cross-pollinate but on different flowers have included maintenance of a certain degree of genetic diversity in the population.

One of my favorite things about jewelweed, though, is their “exploding” seeds pods! Once fully developed, the slightest touch can trigger the pods to burst open with enough force to send the seeds flying almost two meters away! How does this work? Explosive dehiscence, the burst of the seed pod, is accomplished by mechanical energy stored in the plant itself. The outer coverings of the seed pods resemble banana peels and are called “valves.” (See image here from Hayashi et al. 2009) These valves, though, contain stored energy that is released when something touches the pod (which is partly how other plants in the jewelweed’s order received the nickname touch-me-nots.) Upon contact, the intersection of the valves bursts, and the valves rapidly wrap themselves up like a cinnamon roll, which sends the seeds flying.

Jewelweed seed pods before and after "popping."

Note: this post includes a description of a traditional remedy, not medical advice. Sensitivities to different plants can vary between individuals. Always discuss actual treatments to medical issues, including contact with noxious plants, with a licensed healthcare provider.

Connecting to the Outdoors Tip: Jewelweed is in bloom now until late September, and you can see it in many of Pittsburgh’s city parks. For South Side residents, you can walk along a exceptionally long stretch of jewelweed in South Side Park near the Sterling Street trail access (as an added bonus, there are currently Allegheny Goatscape goats working on mile-a-minute vines near the trail entrance!)

Lu 2002: Why is cleistogamy a selected reproductive strategy in Impatiens capensis (Balsaminaceae)?