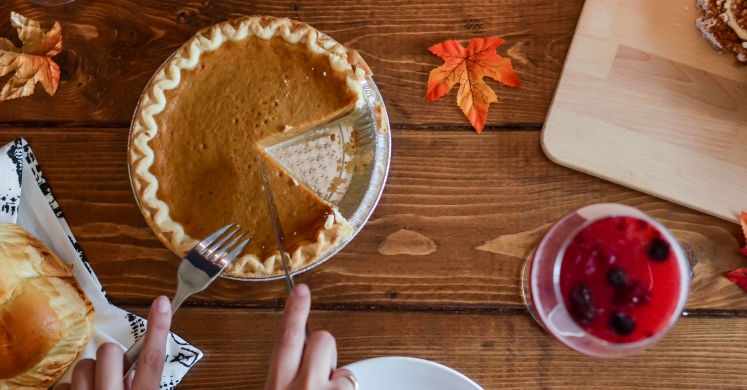 #bioPGH Blog: Tubers and Turkeys and Pies – Oh My!

Today includes one of the biggest meals of the year for many of us, and oh my goodness Thanksgiving dinner is just bursting with some fascinating food science. Check out what’s on the menu for some of the Phipps family, and dive deeper into the biology and history of some of our favorite dishes!

Heather Shannon, Senior Manager of Let’s Move Pittsburgh and Special Programs – “Corn. I feel like I want corn with everything on Thanksgiving.”
Corn first appeared in history somewhere between six and ten thousand years ago in central Mexico. Wild “corn,” though, is actually a grass called teosinte (Zea mays parviglumis). Over the last several thousand years, corn has been domesticated by humans through the process of “artificial selection.” Artificial selection is human-mediated selective breeding. Thousands of years ago, humans selected seeds from individual plants with the traits they most preferred—larger seeds, better taste, and so on, and they planted those seeds to grow more plants with those features. After repeating this process for many, many generations, we arrived at the delicious corn that will grace tables this week!

Sarah Cullo, Let’s Move Pittsburgh Coordinator – “Brussel sprouts! I love brussel sprouts.”
Brussel sprouts are one of the many ubiquitous Brassica vegetables – they are technically derived from the same species as cabbage, broccoli, cauliflower, kale, collard greens and a number of other common plants. In another nod to artificial selection, humans selectively planted Brassica to feature certain parts of the plants over others (e.g. brussel sprouts were selectively grown over time to feature the lateral buds while kale was grown from the leaves.)

Deb Knorr, Volunteer Coordinator – “Pumpkin pie.”
Pumpkins, zucchini, squash – all the same species, Cucurbita pepo! Like the Brassica veggies, the Cucurbitas were bred for different traits, which is how we ended up with a variety of fruits from the same original plant.

Dr. Sarah States, Director of Research and Science Education – “Butternut squash and leek soup.”
Butternut squash is closely related but not the same species our squash assortment; the species name is Cucurbita moschata. Leeks, on the other hand, are closely related to onions, garlic, and chives in the genus Allium. Interestingly, leeks derive their strong flavor from a veritable cocktail of chemical compounds in the plant—one early food chemistry paper identified 67 different compounds that combined to make the distinct flavor of a leek!

Mark D’Amico, Studio Phipps Manager – “I do love a good cranberry sauce.”
Long before the Pilgrims had the first Thanksgiving, cranberries were a part of life in the “New World.” The Wampanoags of Massachusetts had a number of uses for cranberries for everything from medicines to meals, and other tribes from the area relied on cranberries as a dye, energy boost, and treatment for various ailments. Today, the Coquille of Oregon still cultivate and market cranberries using organic practices—a legacy of their cultural belief in sustainability and the cranberry’s place in historic tradition.

Dr. Katilyn Mascatelli – “Sweet potato casserole with pecans.”
Sweet potatoes are tuberous roots (a tuber is a specialized portion of a plant that can store starch.) Sweet potatoes also have the unusual distinction of being the first plant studied as being naturally transgenic. While the labelling battle of lab-modified transgenic food rages, sweet potatoes are an example of plants that naturally contain bacterial DNA.

Michelle Allworth, Facilities Project Manager – “Mushroom gravy!”
We have stumbled upon the fungi! Mushrooms and other fungi have a major job in ecosystems: decomposition. Fungi break down organic matter—things that used to be alive. This is a key part of nutrient cycling, the process which allows other organisms to take advantage of the released nutrients from dead plant or animal material.

Adam Haas, Interpretive Specialist – “Since we’ll be visiting family in Rhode Island, we will have littleneck clams.”
“Littleneck” is a commercial reference to a particular size of the northern quahog clam, also called a hard clam. This species is native the eastern seaboard, and can usually live to be 20 years—though 40 years is not unheard of! As a Thanksgiving food, this might be among the most authentic menu items at the original Thanksgiving feast celebrated between the Pilgrims and the Wampanoag. Seafood items would surely have been on the table alongside venison, duck, nuts, berries, possibly turkey and early cultivars of the vegetables we enjoy today.

Dr. Shishir Paudel, Plant Ecologist – “We will be making a turkey seasoned with South Asian spices and stuffed with all sorts of vegetables.”
The US is home to roughly seven million wild turkeys, yet as recently as the1920’s-30’s, the US turkey population hit its lowest point, with roughly only 30,000 individuals across the country, and the bird was extirpated (locally extinct) from 18 states. The Pennsylvania Game Commission estimates that during this time, approximately 3000 birds lived in portions of Pennsylvania, protected by rugged, inaccessible terrain in a few parts of the state; but today, we have a healthy population with birds in every county.

Sharon McCague, Discovery Education— “I’m in charge of dessert, and that will be apple pie.”
Mmmm, delicious fruits! Our modern apple trees, members of the rose family, were probably derived from a wild fruit in Kazakhstan, the Malus sieversii. The exact timing of cultivation is unknown, but the oldest known apple variety is roughly four thousand years old and cultivated apples eventually spread around parts of Asia and Europe during the ages of ancient Greeks and, later, the Romans.

Me – “Whipped cream on all the desserts!”
Well…who doesn’t enjoy a whipped topping of air bubbles trapped in partially crystallized fat globules, with whey proteins, lactose and water mixed in between the bubbles?

Whatever is on your table this Thursday, I hope it’s a wonderful of family, food, and gratitude. And from our families to yours, have a Happy Thanksgiving!

Connecting to the Outdoors Tip: This Black Friday, instead of shopping, spend some time outdoors with friends or family!