We may not be hobbits in search of second breakfast, but many of us certainly enjoy the quest to find elusive fungi in the woods. Spring is a good time to look for mushrooms, which was exactly what I did this past weekend. Though my hike in particular ended in many more sightings of wild flowers than mushrooms, you could see still the importance of our fungal friends throughout the forest. Let’s dig a little deeper into the world of these decomposers!

We’ve all seen fungi in some form or another, though there is quite a bit of variation across this kingdom of life. Some fungi may look like plants, others look like slime or dust, and others may look bubbly, bumpy masses. Some fungi grow on the ground, others on trees, and some…on your feet. The mushrooms of a forest, though, are only the temporary fruiting body of a fungus; the rest of the organism lies underground or in rotting wood. This “hidden” portion of a fungus is a network of little filaments (threads) called mycelia (singular: mycelium).  Though they may loosely resemble a thin webbing of plant roots, they have quite a different anatomy and function. Mycelia produce the fruiting bodies of fungi, what we often think of as mushrooms, like puffballs, but they also break down organic material and absorb the nutrients.

This function of mycelia hints at a major job of fungi in ecosystems: decomposition. Fungi break down organic matter—things that used to be alive. This is a key part of nutrient cycling, the process which allows other organisms to take advantage of the released nutrients from dead plant or animal material. Fungi accomplish this by producing enzymes, a special kind of protein that breaks tough materials (have you ever put meat tenderizer on a tough steak? That is an enzyme changing the composition of some of the tough protein in the meat.)

Pennsylvania is home to hundreds of different kinds of fungi, and there are many fruiting this time of year. Richard Jacob, of the Western Pennsylvania Mushroom Club says:

“The big one this time of year are morel mushrooms. The season is late and will probably be short. The warmer weather will put an end to the season very soon as soil temperatures rise above 55°F so this is the week!” 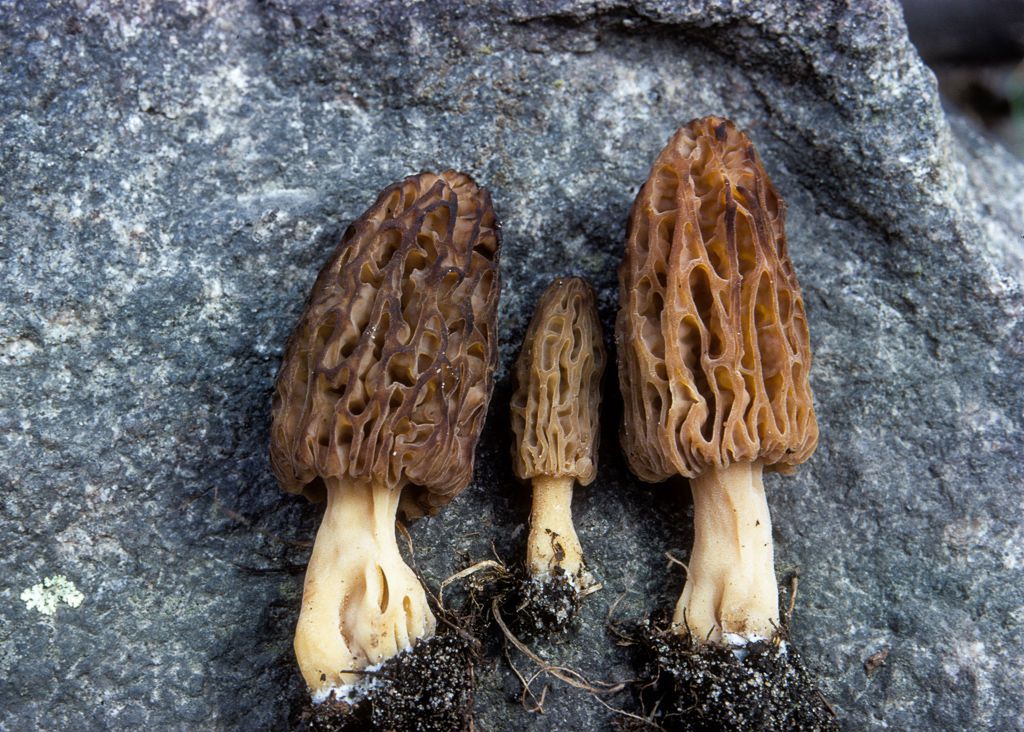 Another mushroom to spot this time of year is the Dryads Saddle, Cerioporus squamosus.

“This is a polypore mushroom that lives on dead trees, often alongside creeks and river banks,” says Richard. “The shape of the mushroom looks like an old time motorcycle saddle. If you pick it and sniff the underside it smells of cucumber or watermelon skin. It is also an edible mushroom but less desirable due to the tendency to have a texture like rubber shoe soles.” 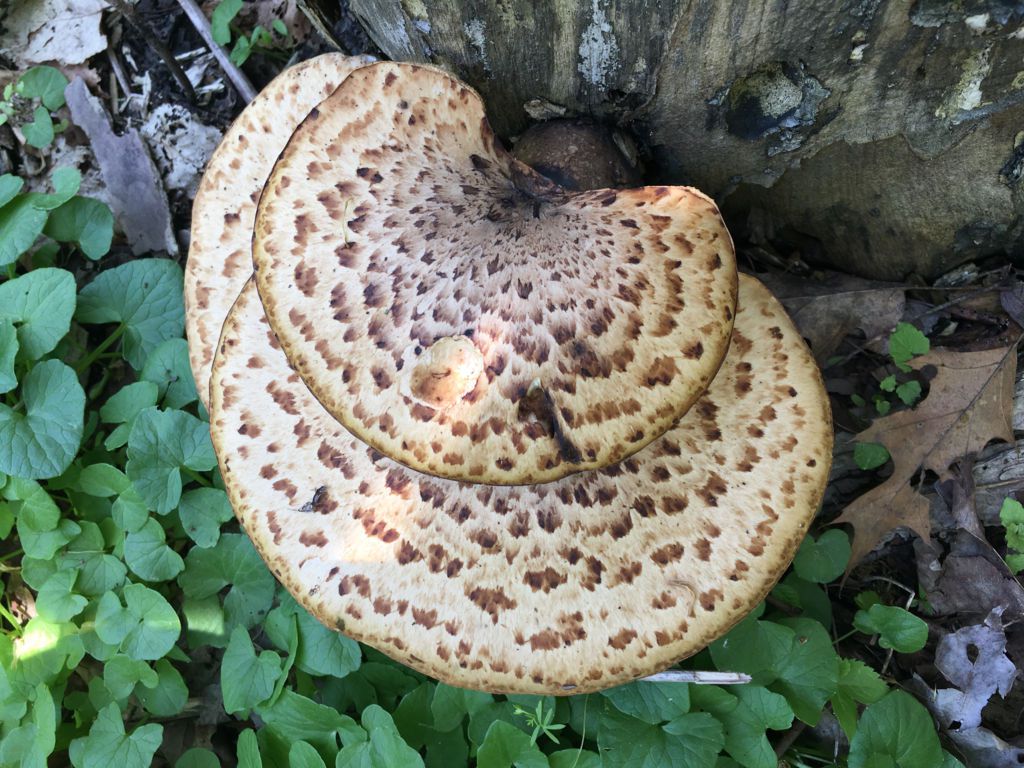 “Mica cap, Coprinellus micaceus, is a gilled mushroom that grows in cluster around rotting tree stumps. The cap is a lighter brown or amber color and is grooved or has furrow like lines radiating from the center to the edge.” 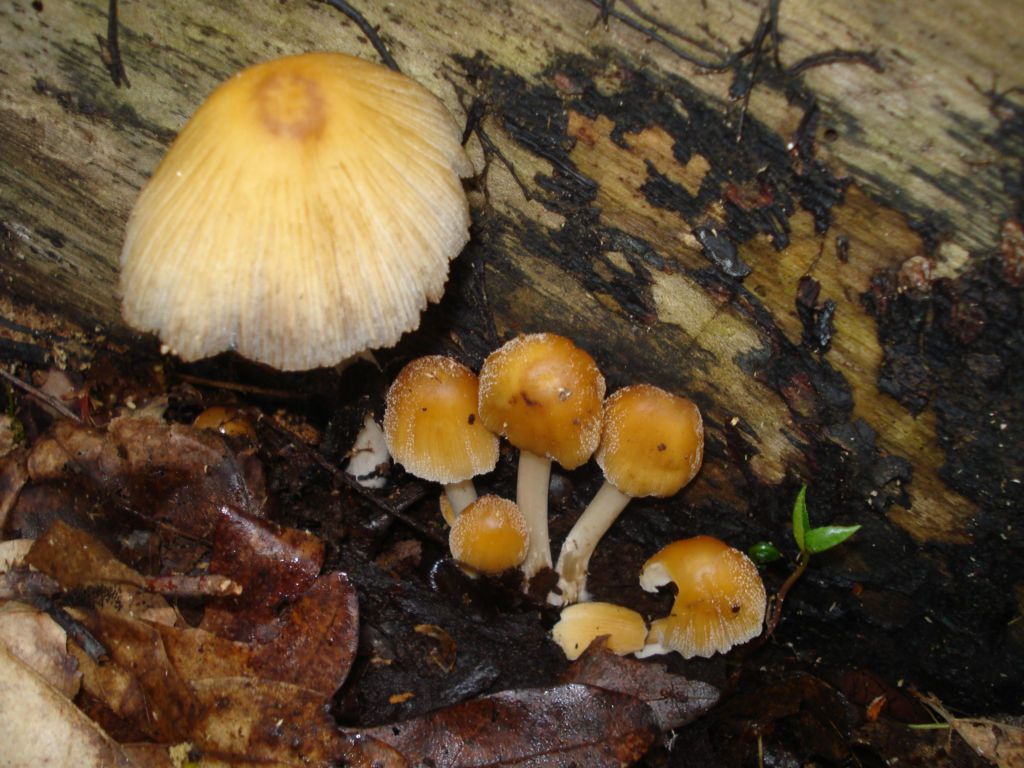 If you’re interested in learning more about mushrooms, be sure to check out the WPMC website. The club is very welcoming to beginners, enthusiasts, and intrigued parties alike! Their mission sums this up well: “The Western Pennsylvania Mushroom Club was created to promote the enjoyment, study, and exchange of information about wild mushrooms.  Everyone who has an interest in wild mushrooms is welcome to become a member. Activities include regular meetings, projects centered on mushrooms, and walks and forays.” Members of the WPMC will also be at Phipps’ BioBlitz on June 10 to lead nature walks and demo some mushrooms at a table in the research base tent. Don’t miss them!

*Always use exceptional caution when it comes to identifying edible mushrooms. Even the most experienced members of the WPMC verify the mushroom species before attempting to eat. Some mushrooms are extremely toxic. Never attempt to eat what you have found if you are still learning.

**”A Shortcut to Mushrooms” is the title of the fourth chapter in J.R.R. Tolkien’s Lord of the Rings first volume, The Fellowship of the Ring, 1954.

Connecting to the Outdoors Tip: If you’d like to go looking for morels in the day or so, Richard suggests, “There are a number of different species but the easier one to look for is the Yellow Morel, Morchella americana. Look for them under dead and dying Elm trees and Tulip Poplars. Overgrown apple orchards are another good location but you want to be wary of old commercial orchards that may have used arsenic based pesticides. Look alike species are the false morels.”