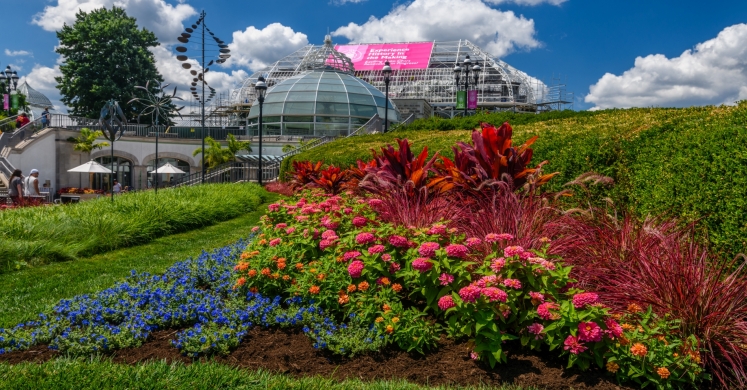 Making History: Behind the Scenes of Our Palm Court Restoration 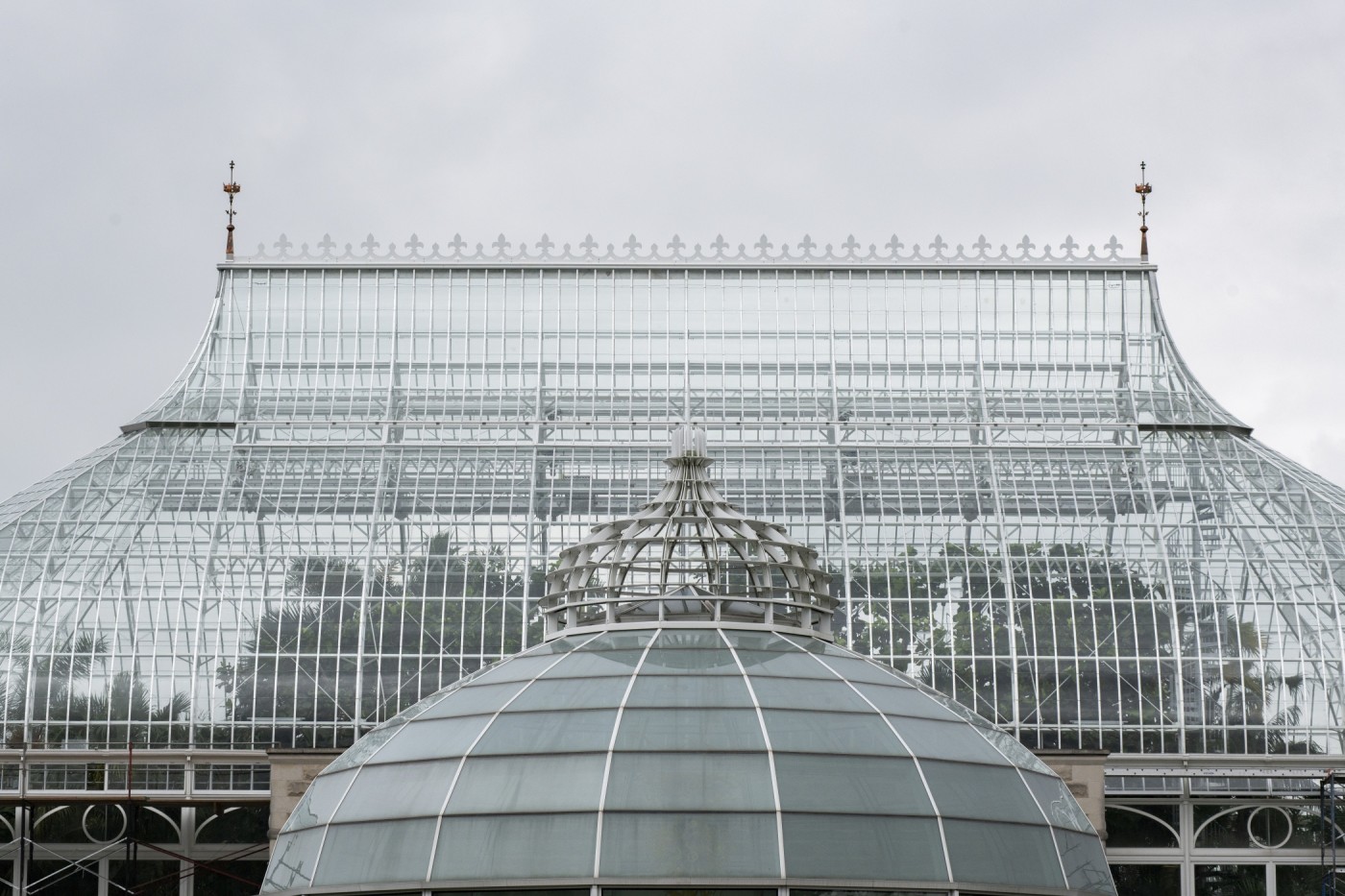 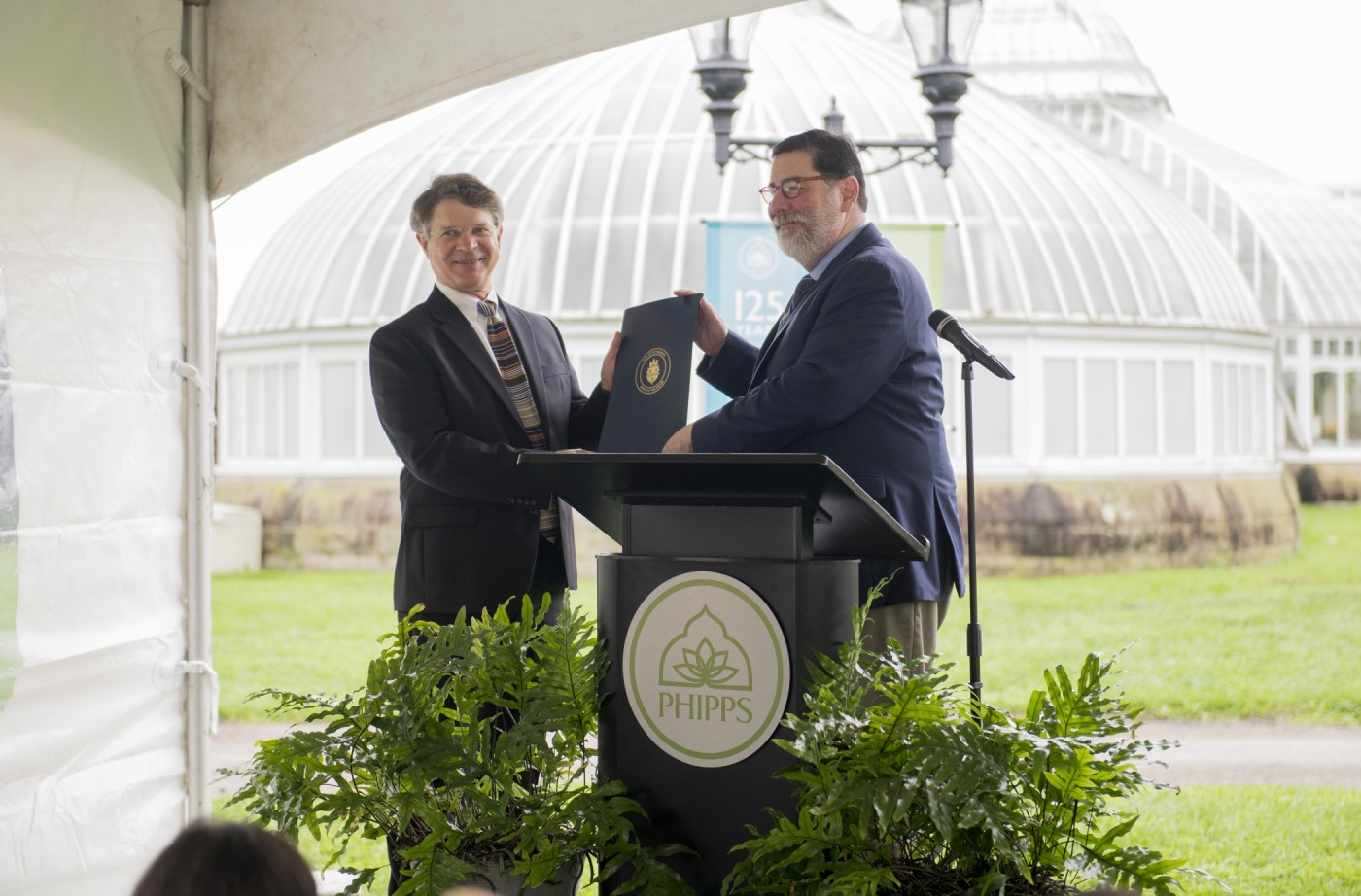 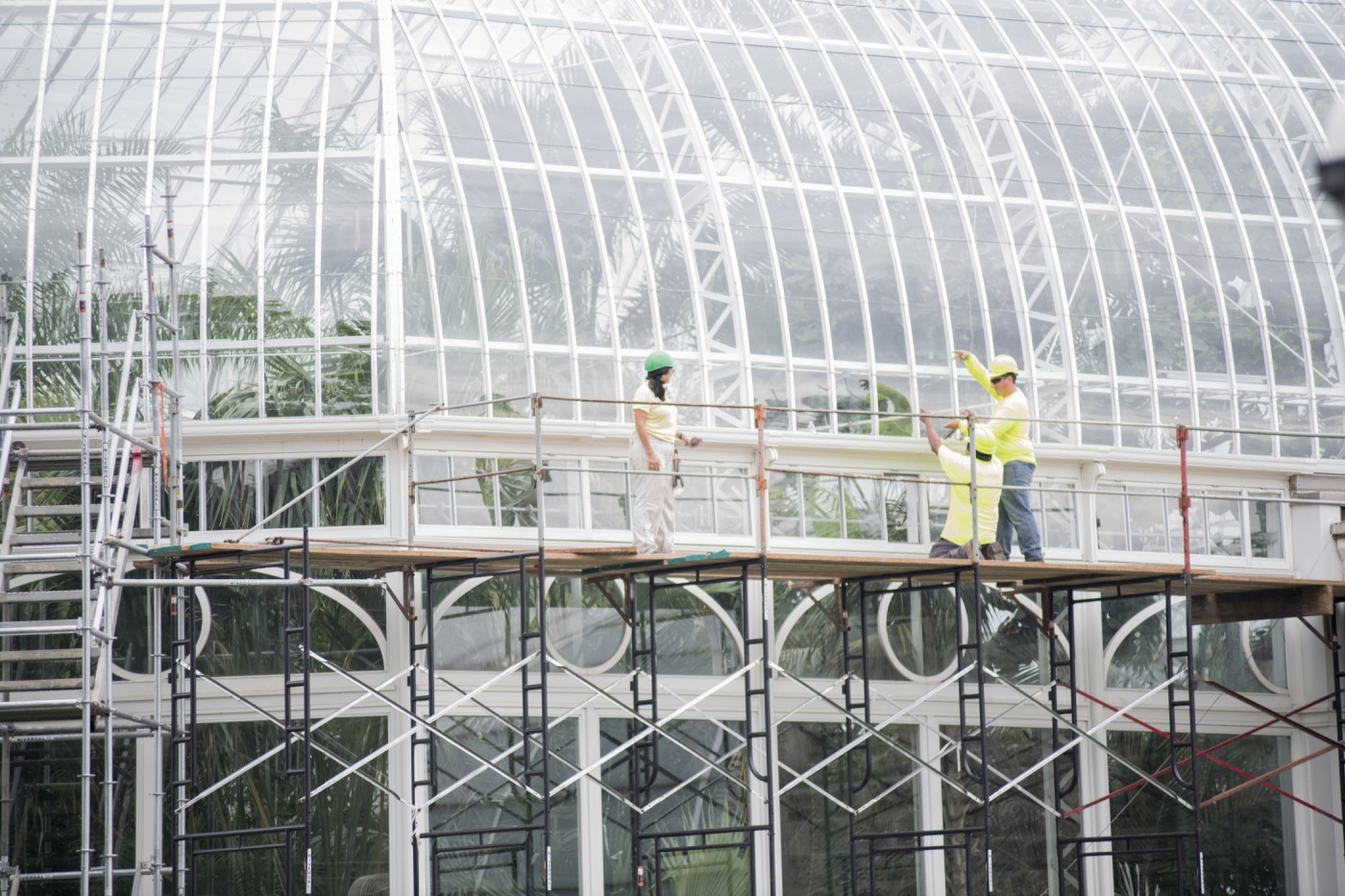 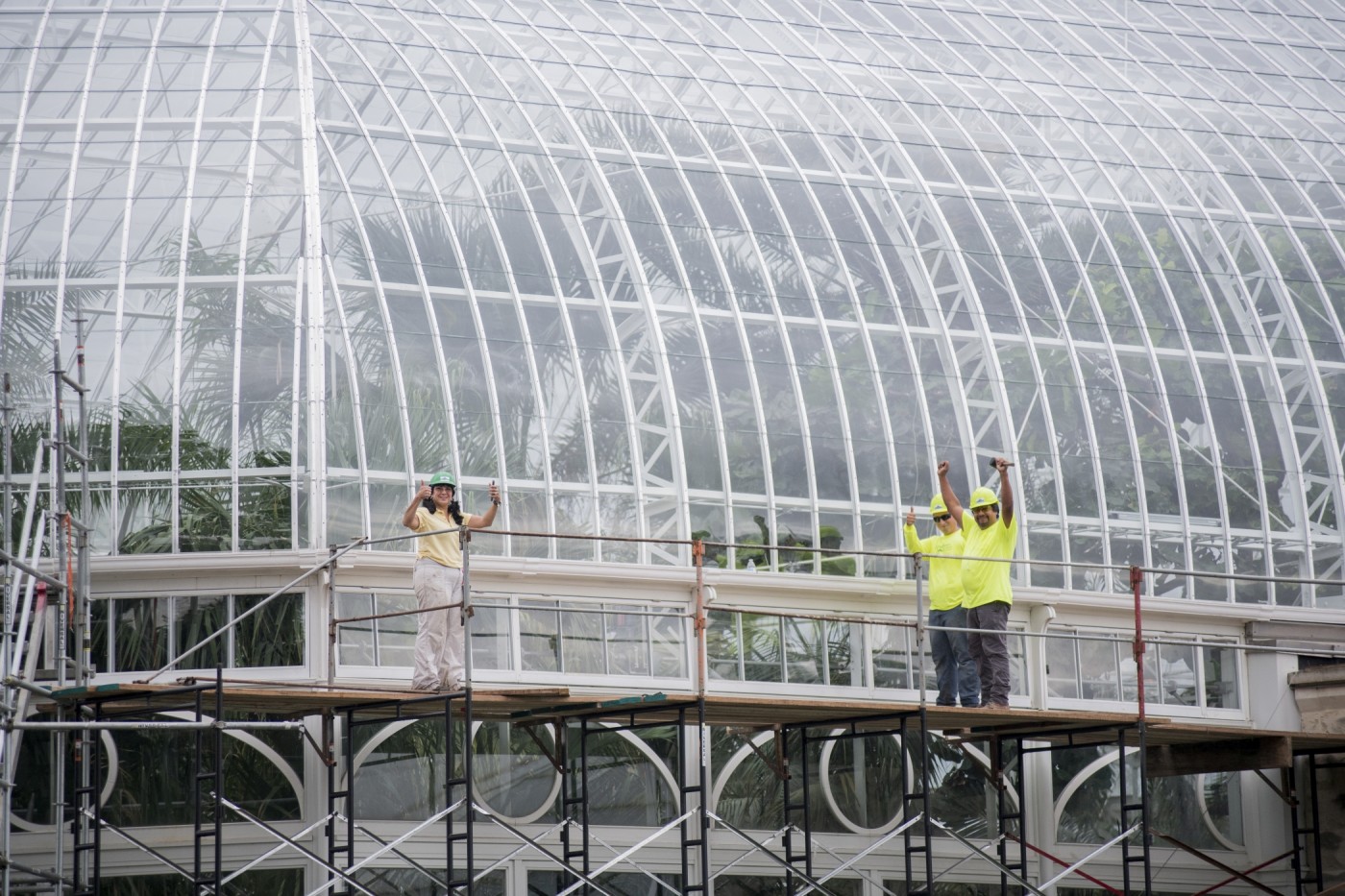 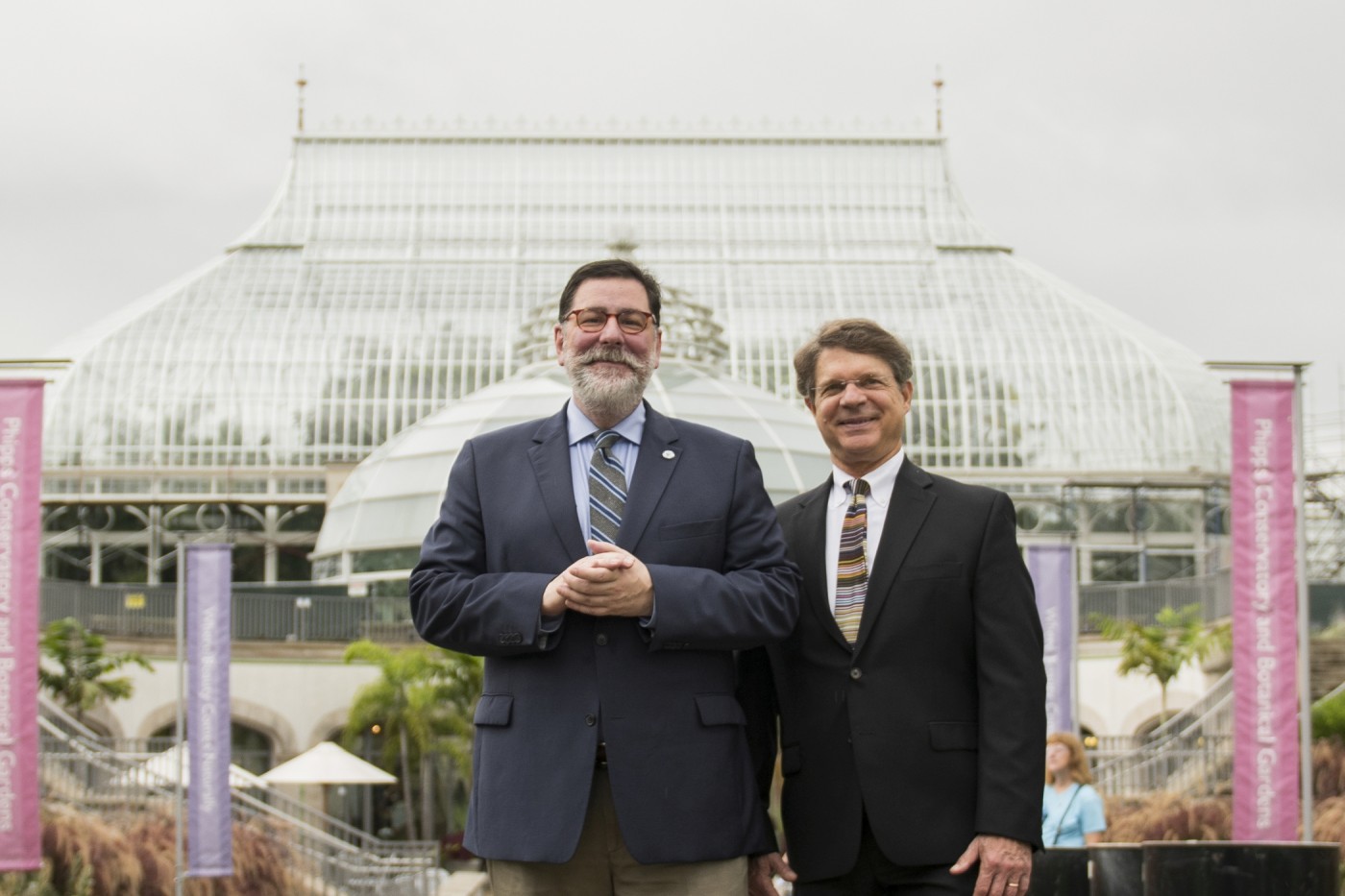 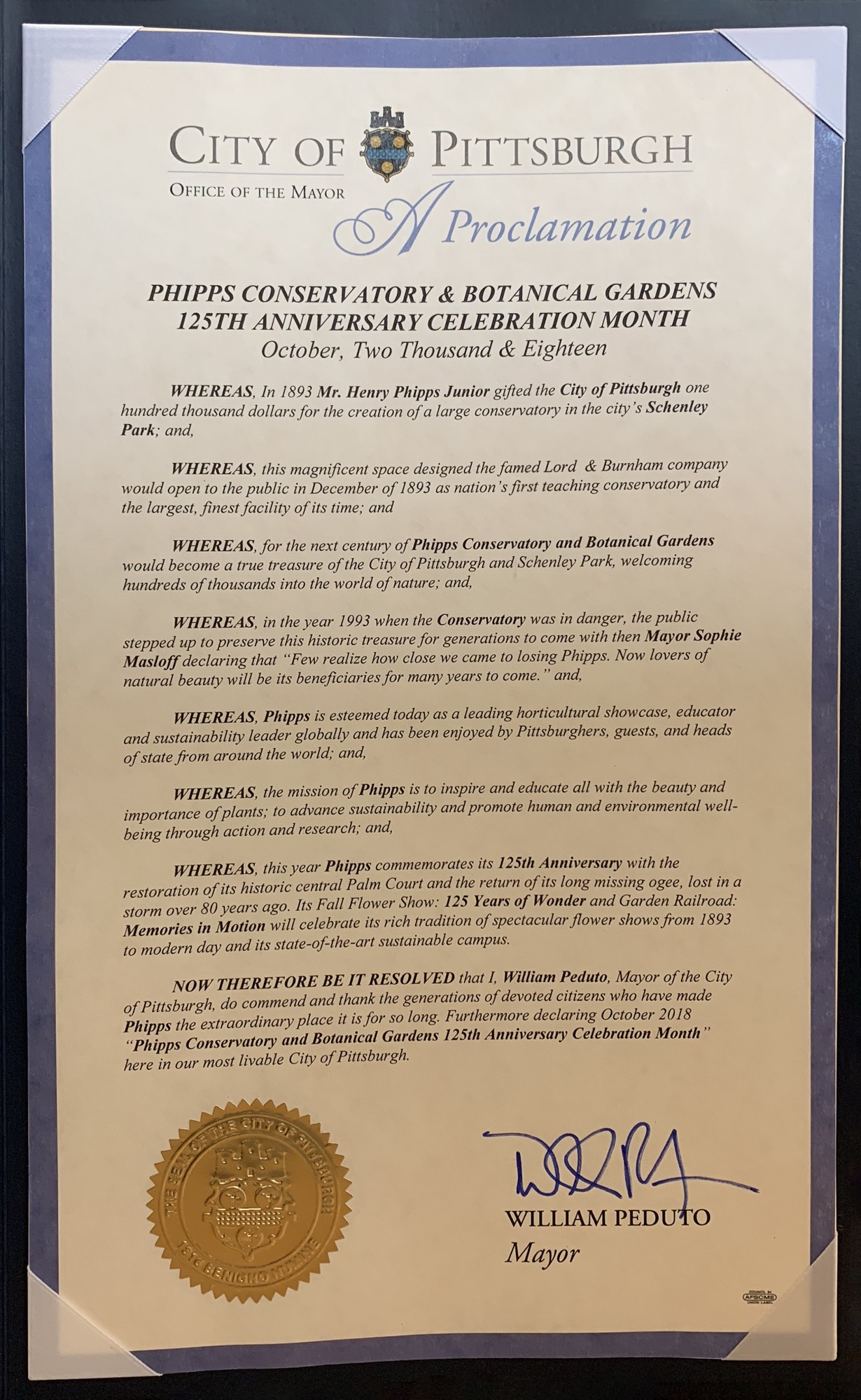 Update — Sept. 21: This week, the restoration team placed the ornamental finials on either side of the Palm Court's newly-restored ogee. Check out the latest photos! 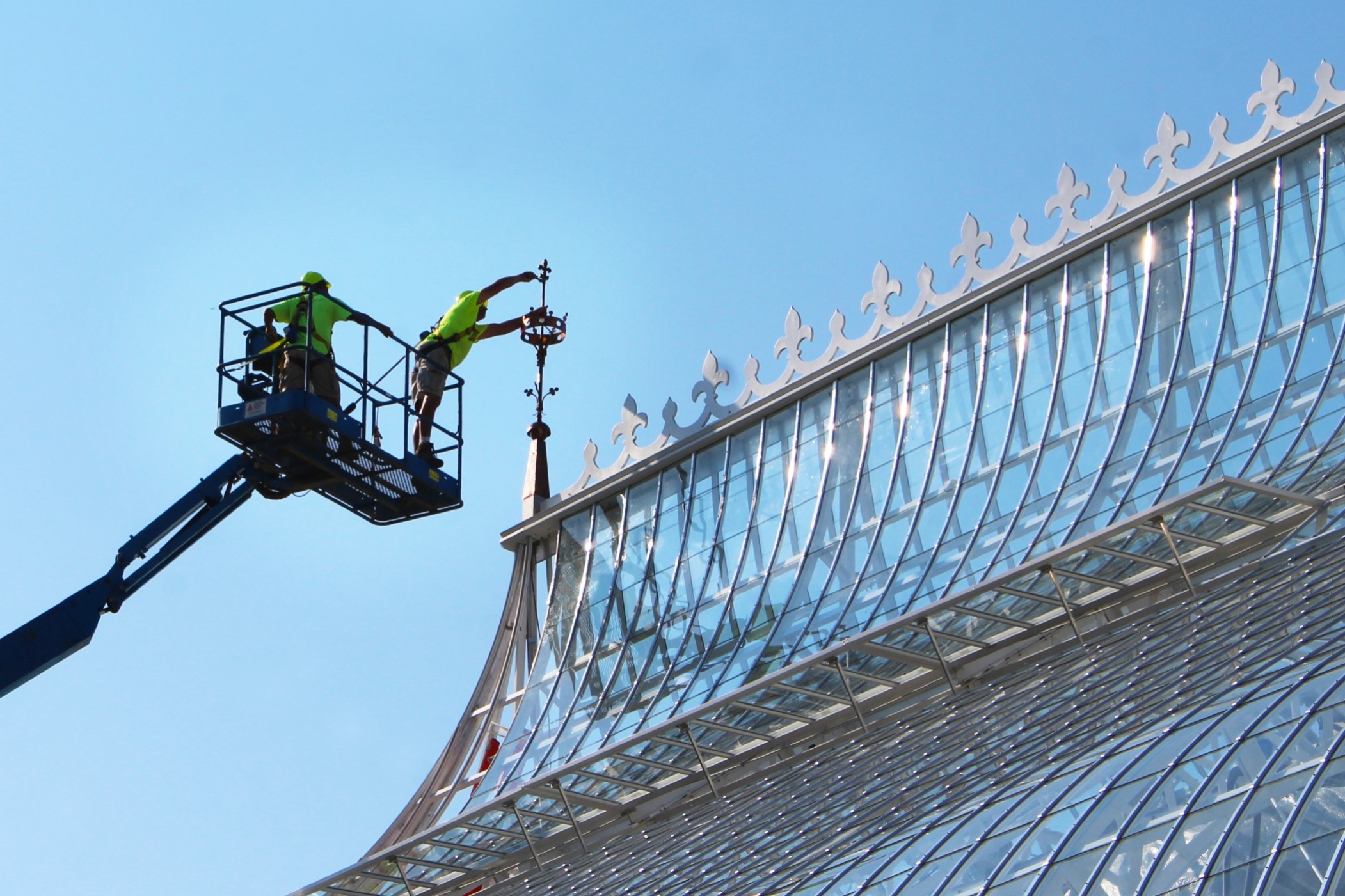 Update — Sept. 13: This week, the restoration team lifted the historic fleur-de-lis cresting atop the ogee by crane, a dramatic moment taking Phipps ever closer to the completed restoration of the Palm Court. Check out the latest photos! 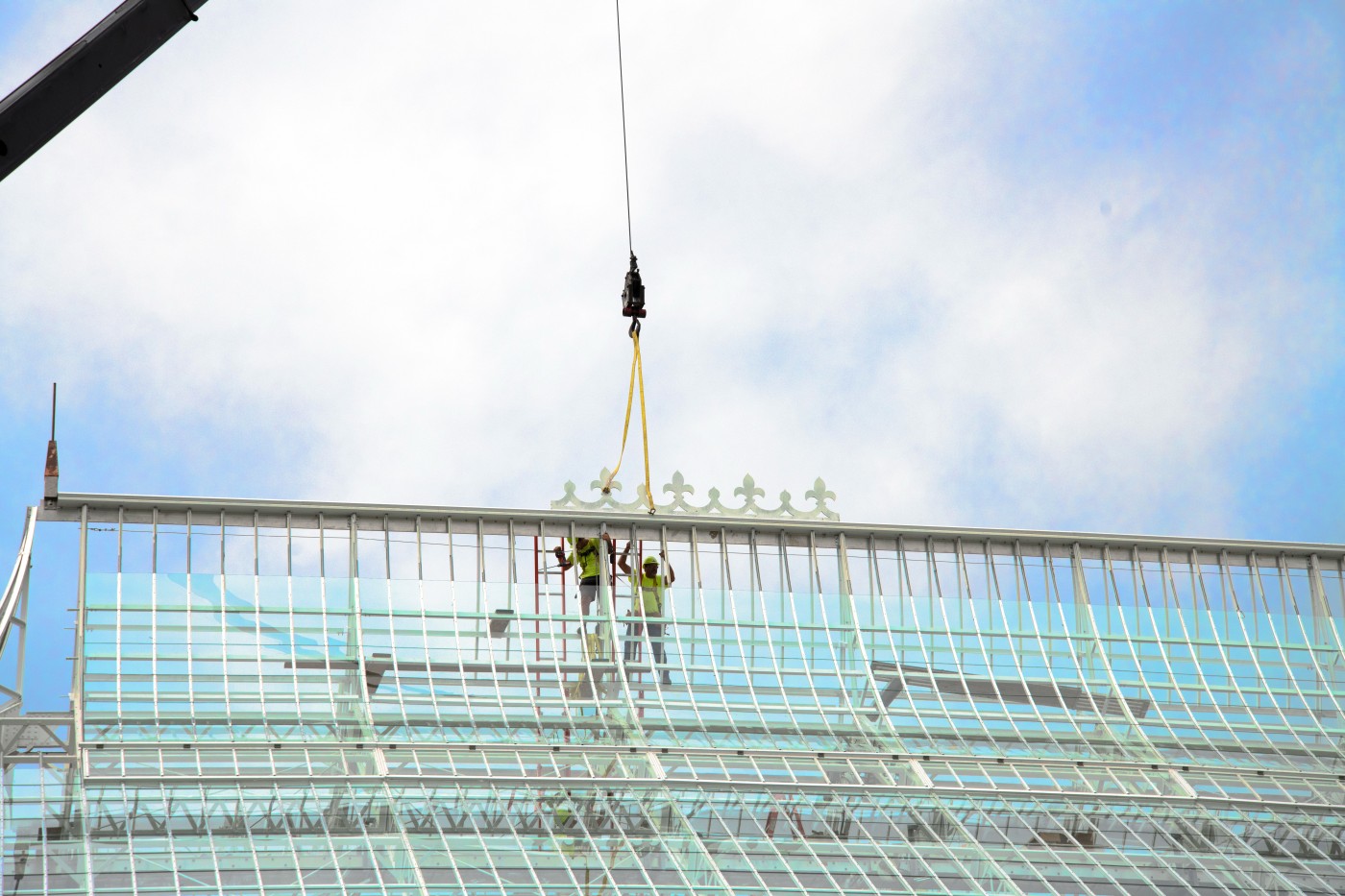 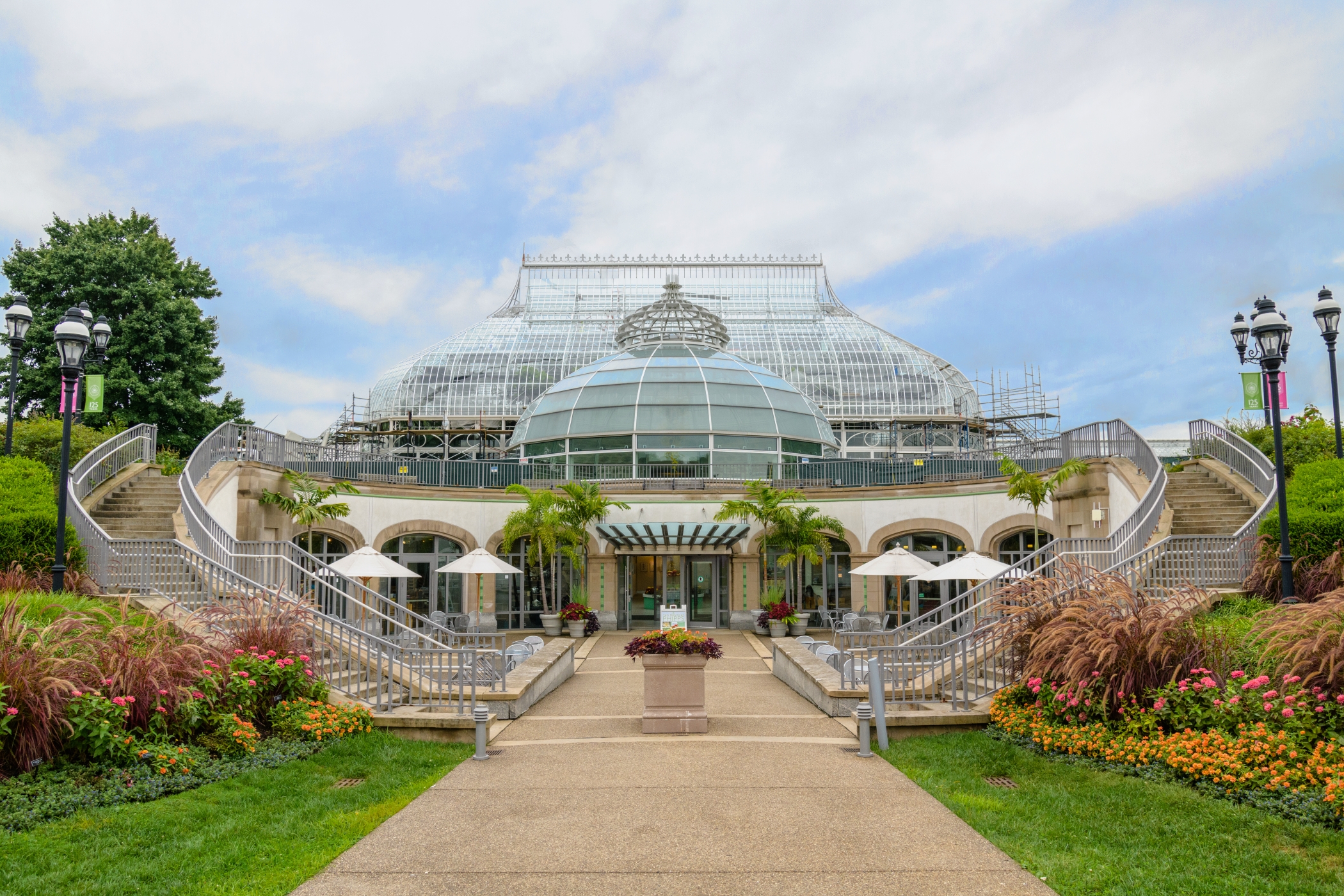 Update — Aug. 30: This week, the restoration team prepared the fleur-de-lis cresting for placement atop the ogee and continued the glazing process (the placement of each individual pane of glass). Check out the latest photos! 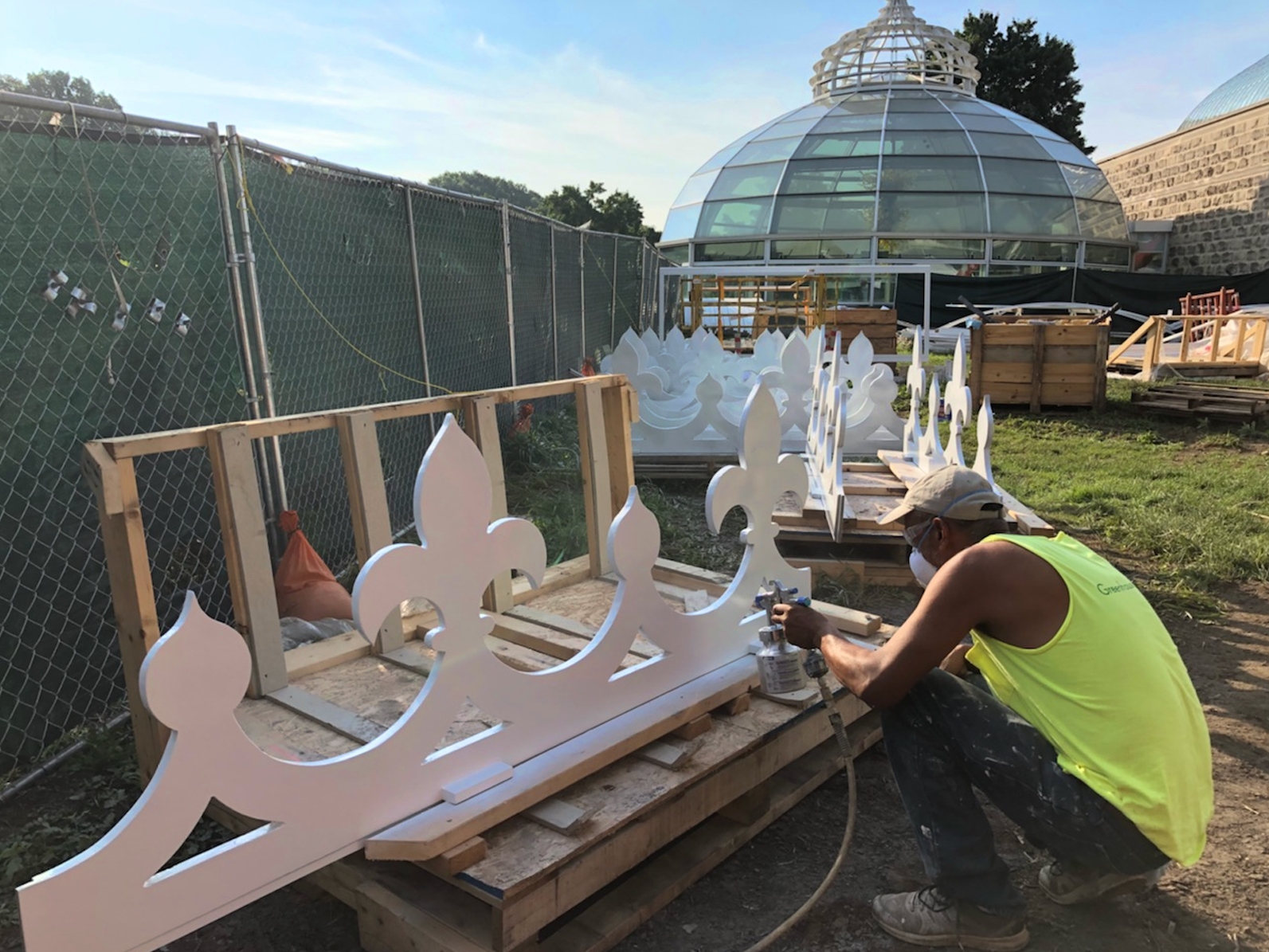 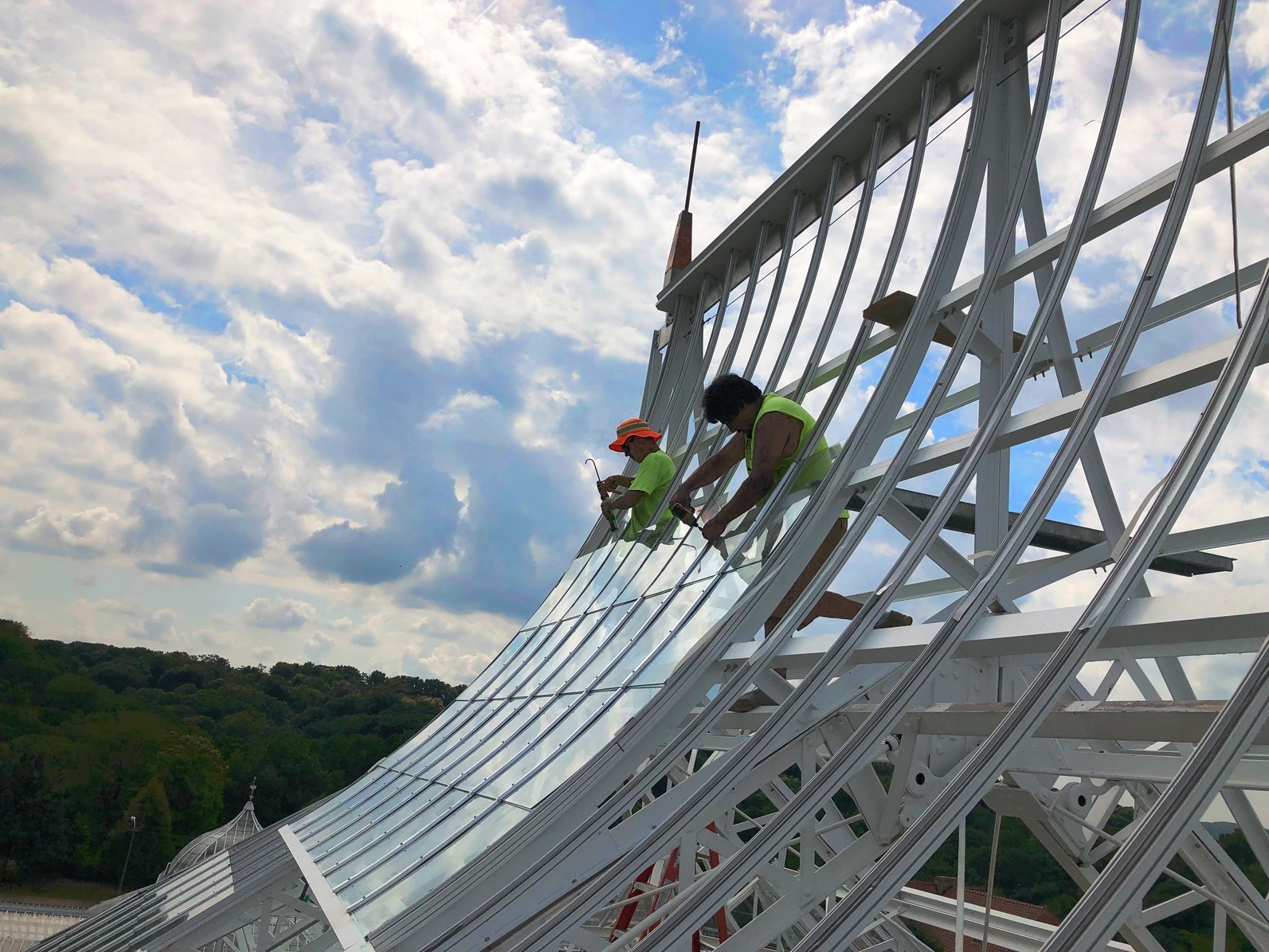 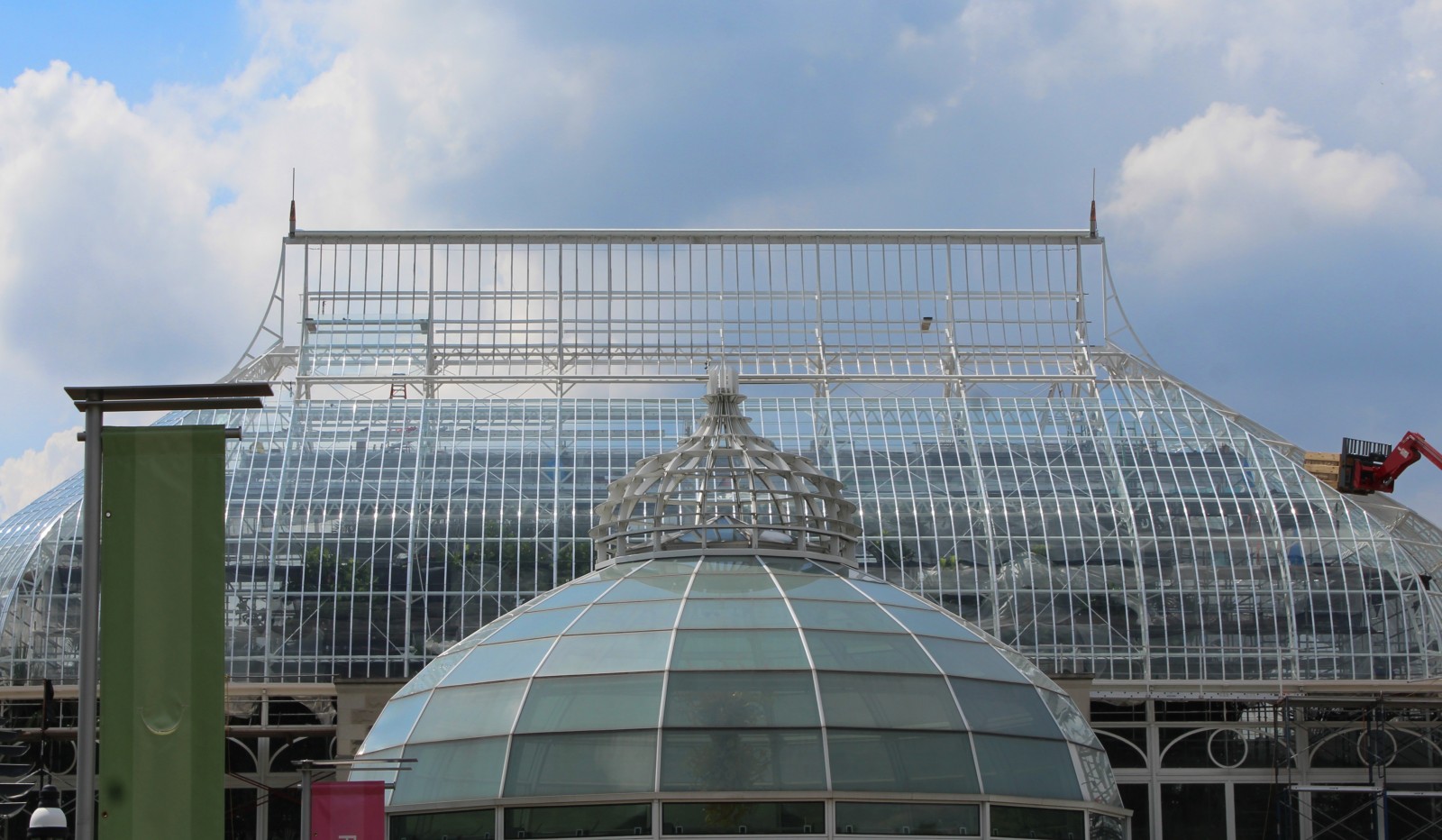 Update — Aug. 10: On this date, the restoration team used a crane to lift the aluminum trusses of the crowning ogee onto the Palm Court, the next step in restoring the space to its 1893 appearance. Check out the dramatic photos! 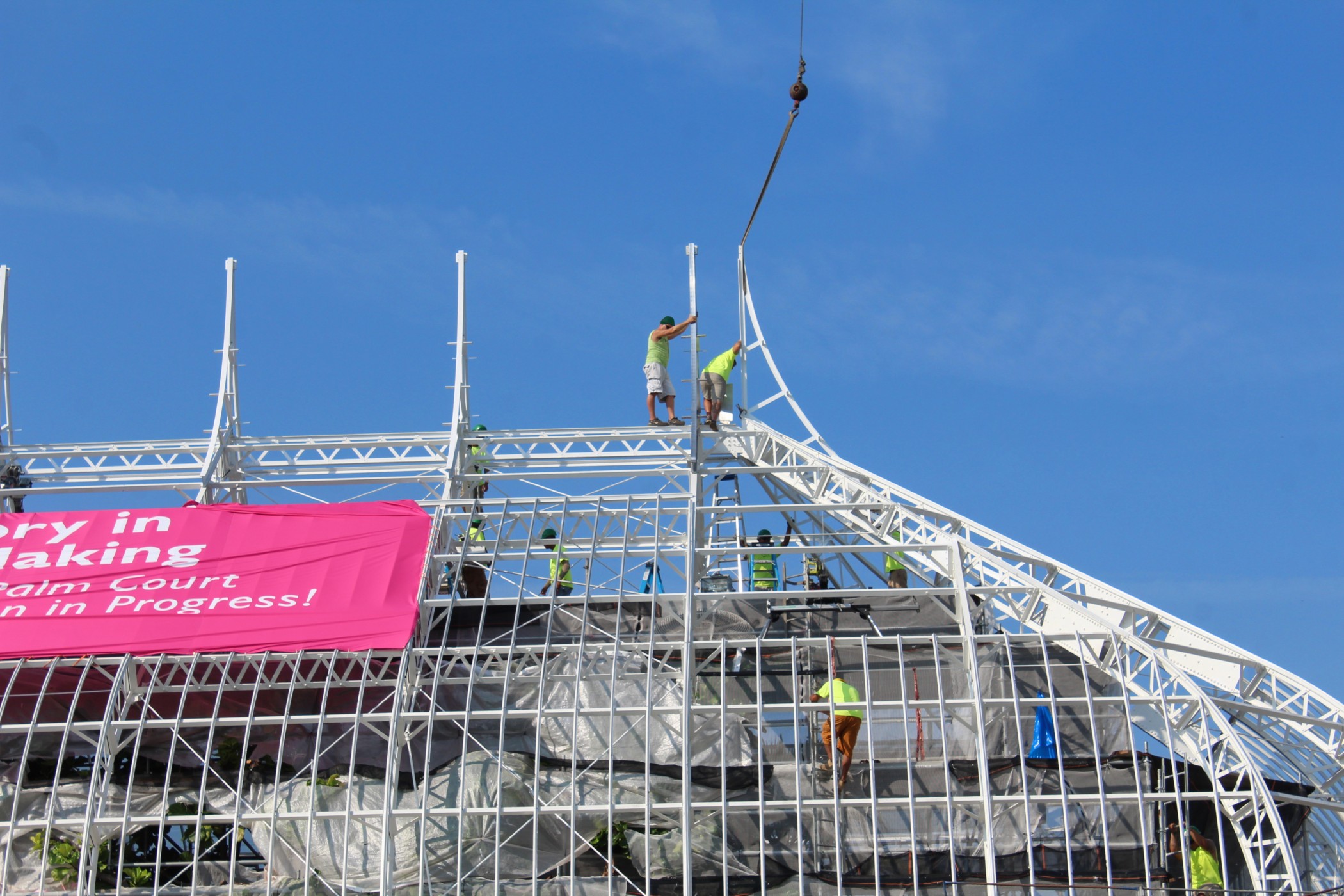 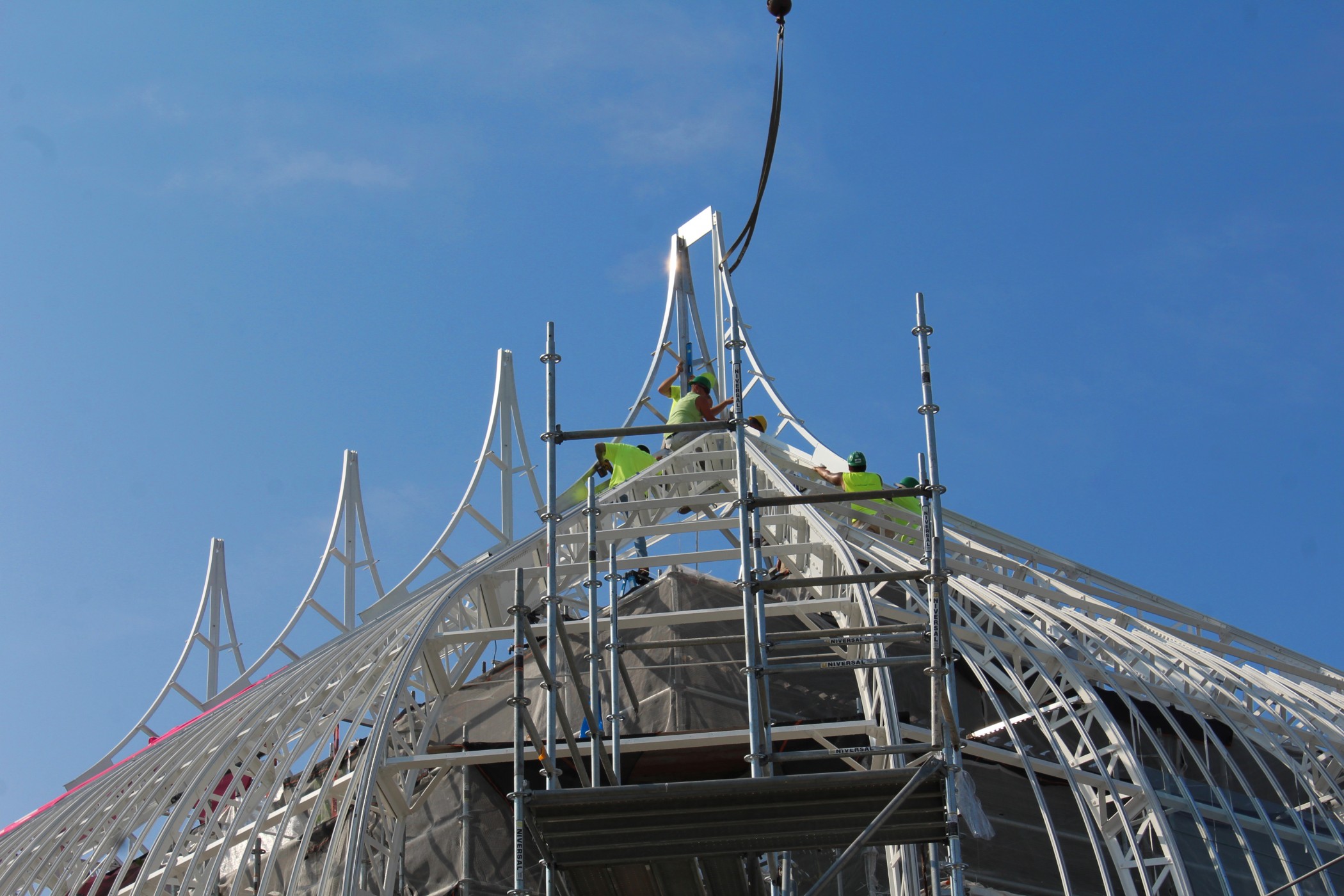 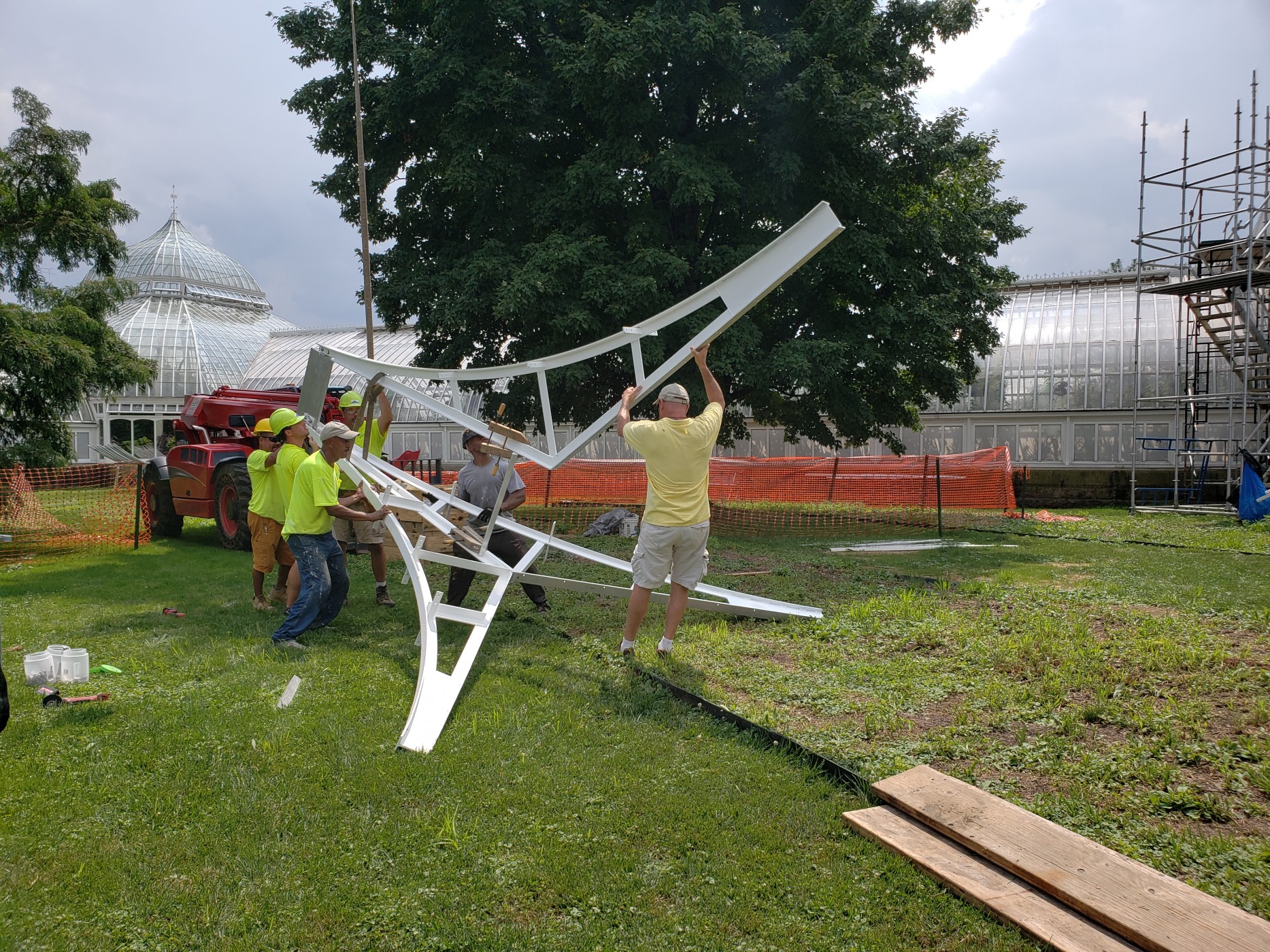 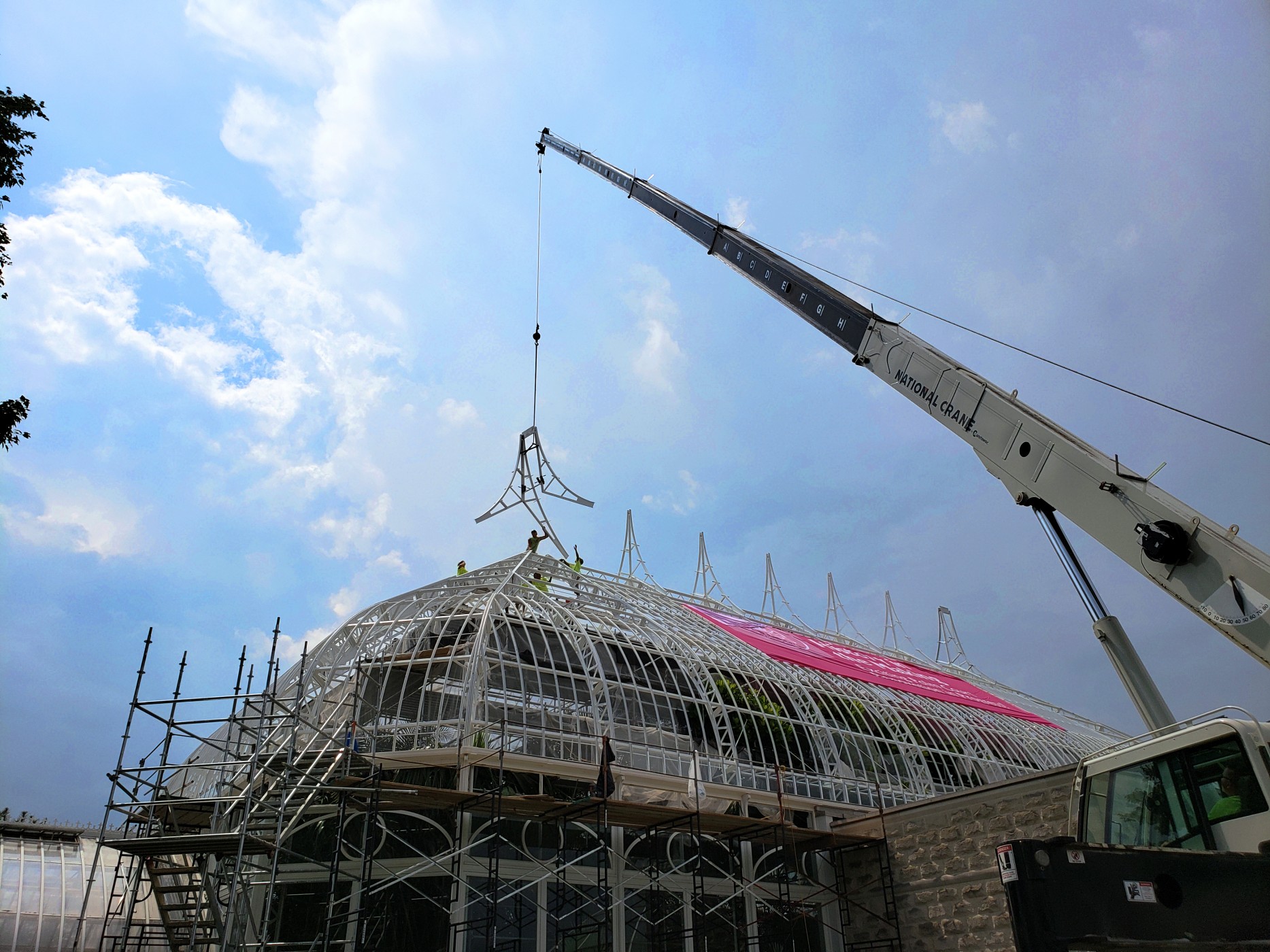 Above: Phipps' Palm Court restoration is seen from an aerial view.

This year, in honor of our 125th anniversary, Palm Court, Phipps' largest glasshouse and part of the original nine-room conservatory, is being restored to protect and sustain its beauty and function for generations to come. This renovation includes a pane-by-pane replacement of the glass, which guests can see happening in real time. In addition to replacing old, brittle glass with over 5,300 panes of new, shining safety glass, this critical restoration project will replace wooden ribbing elements with aluminum and restore decorative elements from the original 1893 Lord & Burnham design. 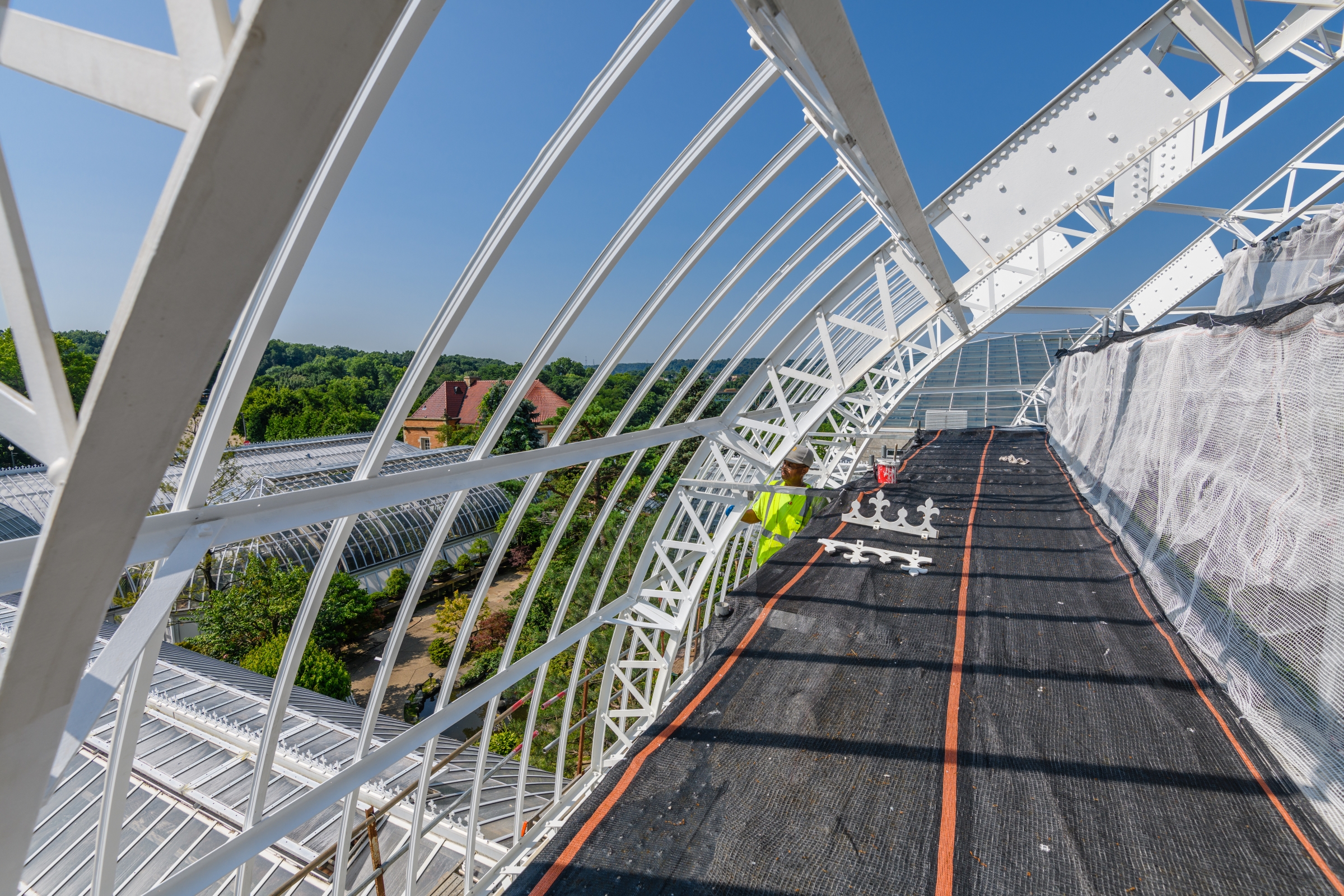 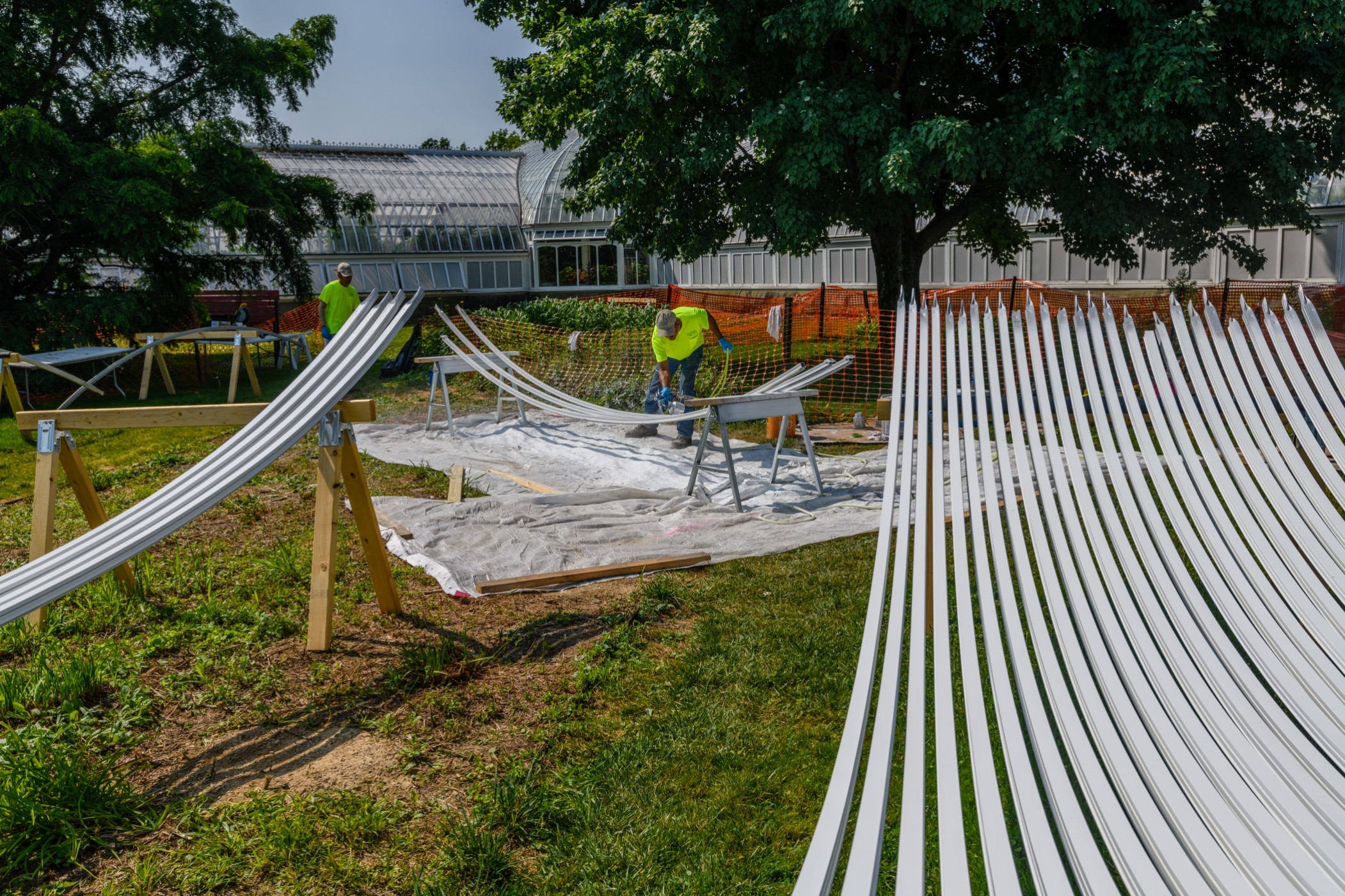 When Phipps was first built in 1893, the Palm Court was topped by a magnificent ogee. Unfortunately, in 1937, the roof of Palm Court — and the ogee in particular — were badly damaged during a catastrophic storm, leaving Phipps to make a difficult choice: the ogee was removed. While Phipps still maintained a striking aesthetic for years, the loss of the ogee has always left something missing from the grandeur of the conservatory. Now as we embark on these massive renovations, the crowning ogee will be restored to its place atop the roof of Palm Court in all of its former glory. 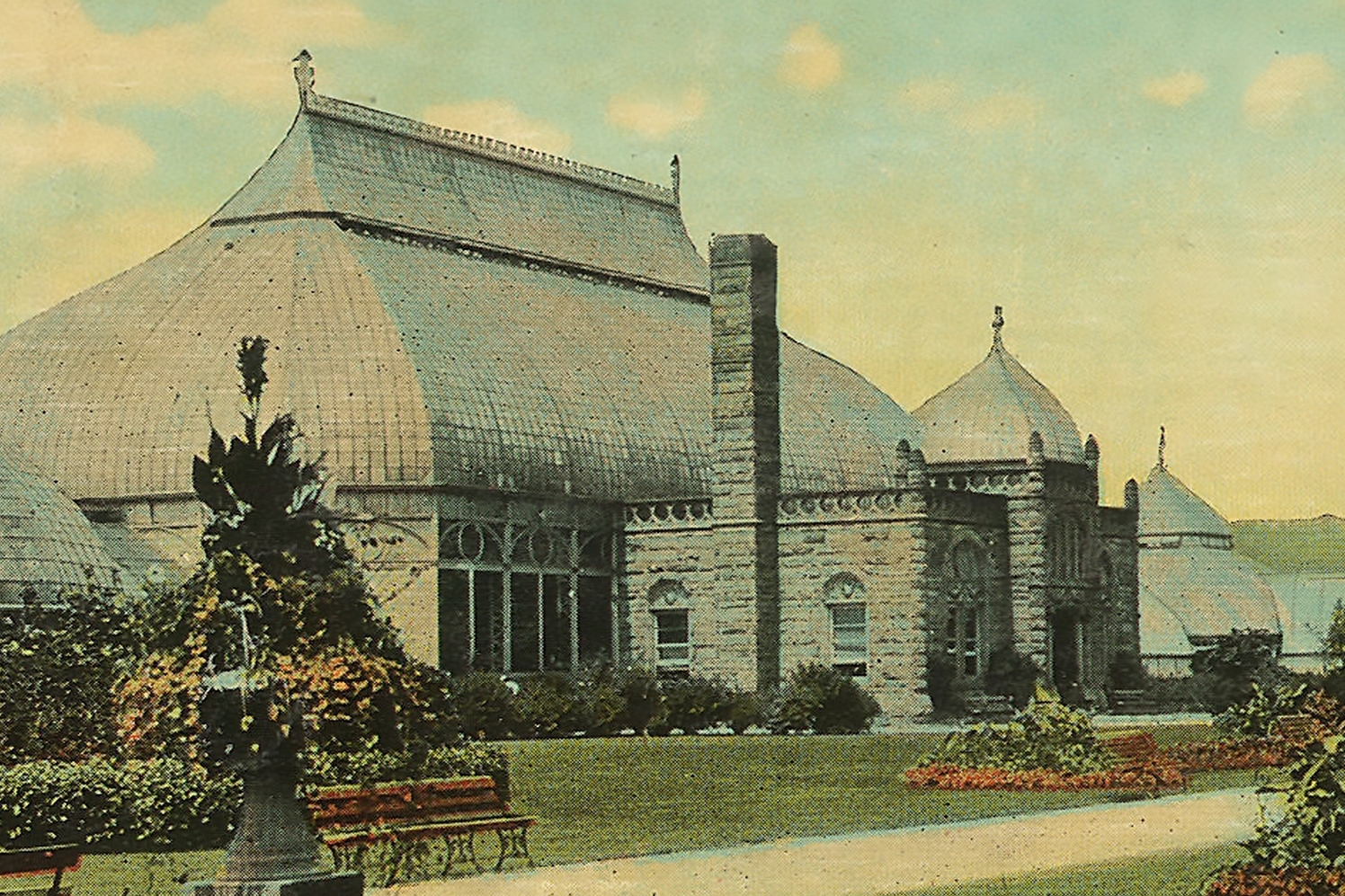 Above: Phipps' Palm Court as it appeared in the 1890s.

According to Phipps Director of Facilities and Sustainability Jason Wirick, who has worked closely with architect Jim Smith and construction team Renovation Services, Inc. on the project, the ogee will extend the height of the roof between 8 and 9 feet, adding an even more majestic appearance to the conservatory. Apart from the recreation of the ogee, additional ornamental features such as ridge fleur-de-lis cresting and 8-foot finials will be added to the roof as well. 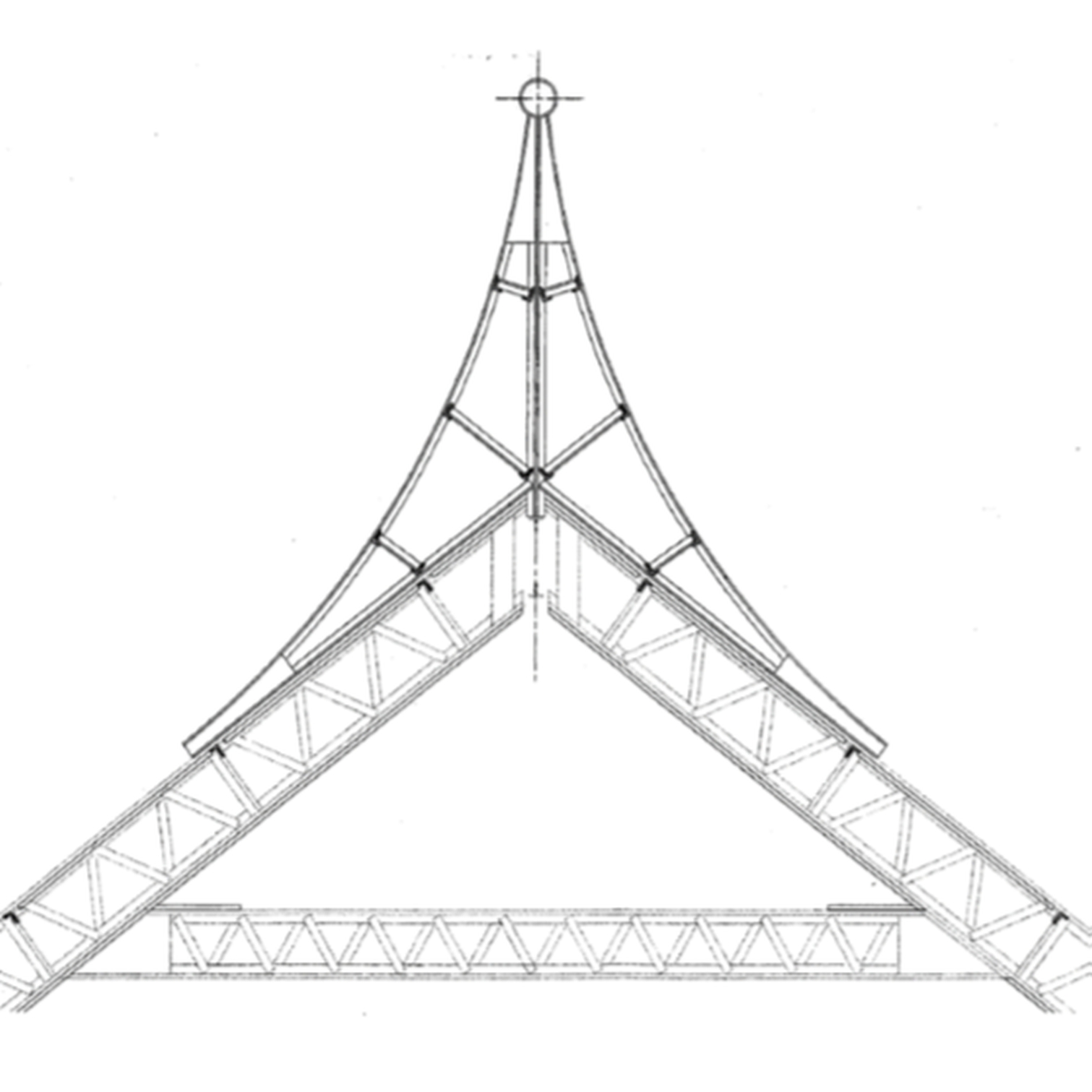 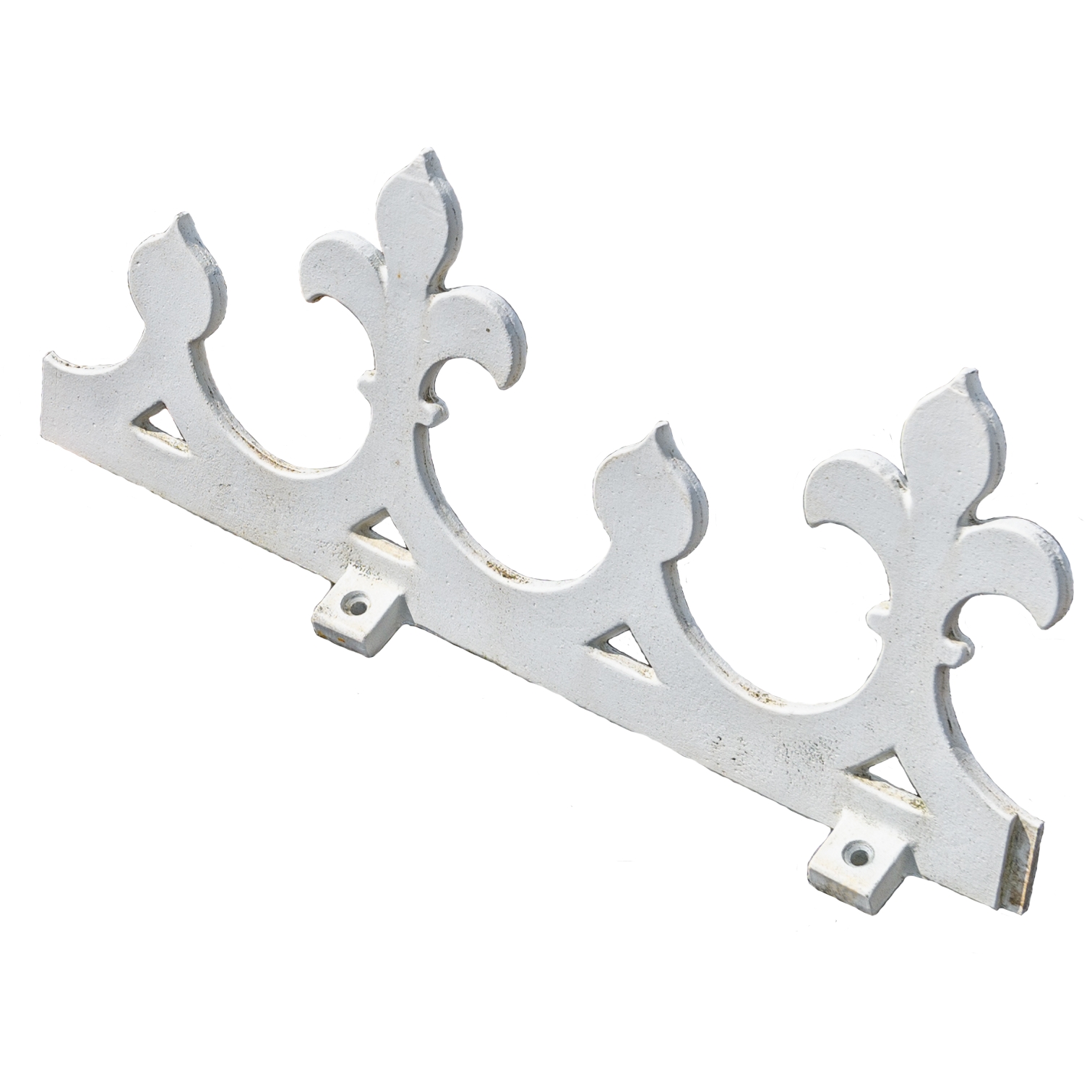 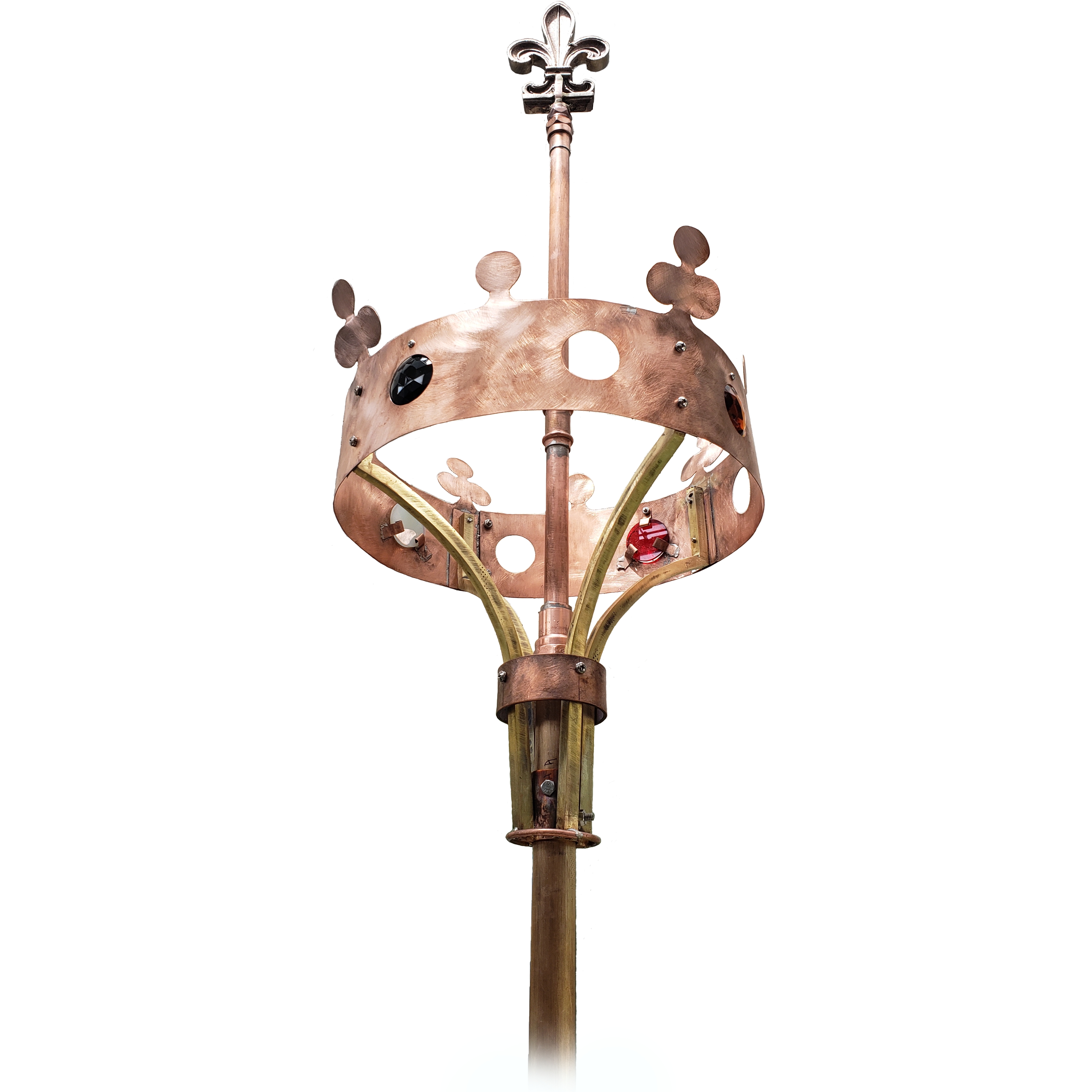 Guests needn’t worry about the palms in the Palm Court during the renovation process. Even without the roof, the palms and other plants are thriving in the humid summer climate. This renovation project has presented Phipps' horticulture staff with a rare opportunity to prune some of the tallest palms. New architecture — such as a staircase and series of catwalks — will allow horticulturists to have easier access to the palm canopy, allowing for safe and more frequent pruning in the future. In September, just before the project is expected to be finished, new, smaller palms will be planted as well, expanding the already impressive collection. 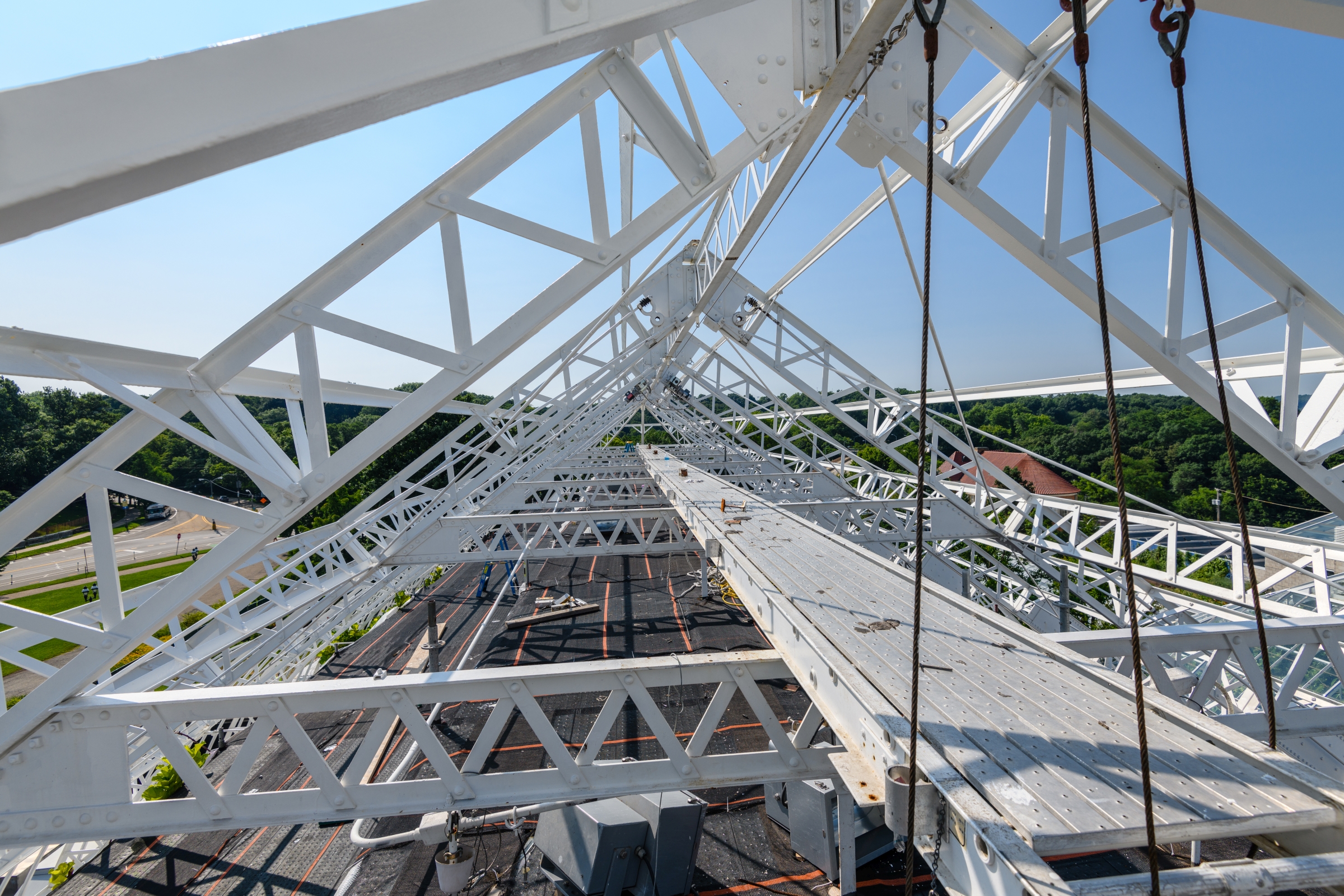 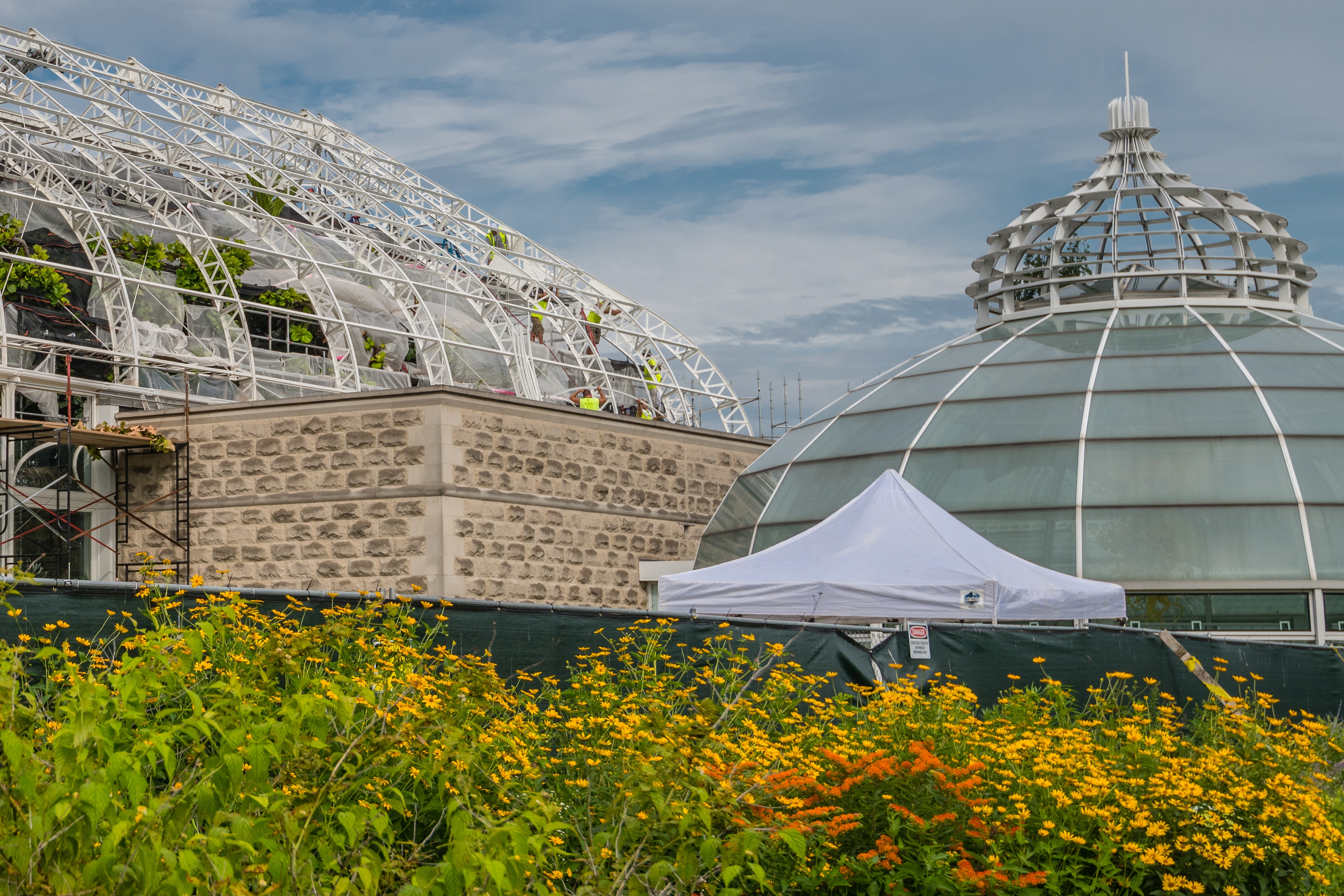 Before this project began, the panes of glass were positioned in rows of six per rafter. Glass was much more expensive in the 19th century and the last time that the glass was replaced, it was cheaper to purchase larger panes to make up the space. Now the team is reverting the spacing back to eight panes per rafter, transforming the appearance back to its original design. 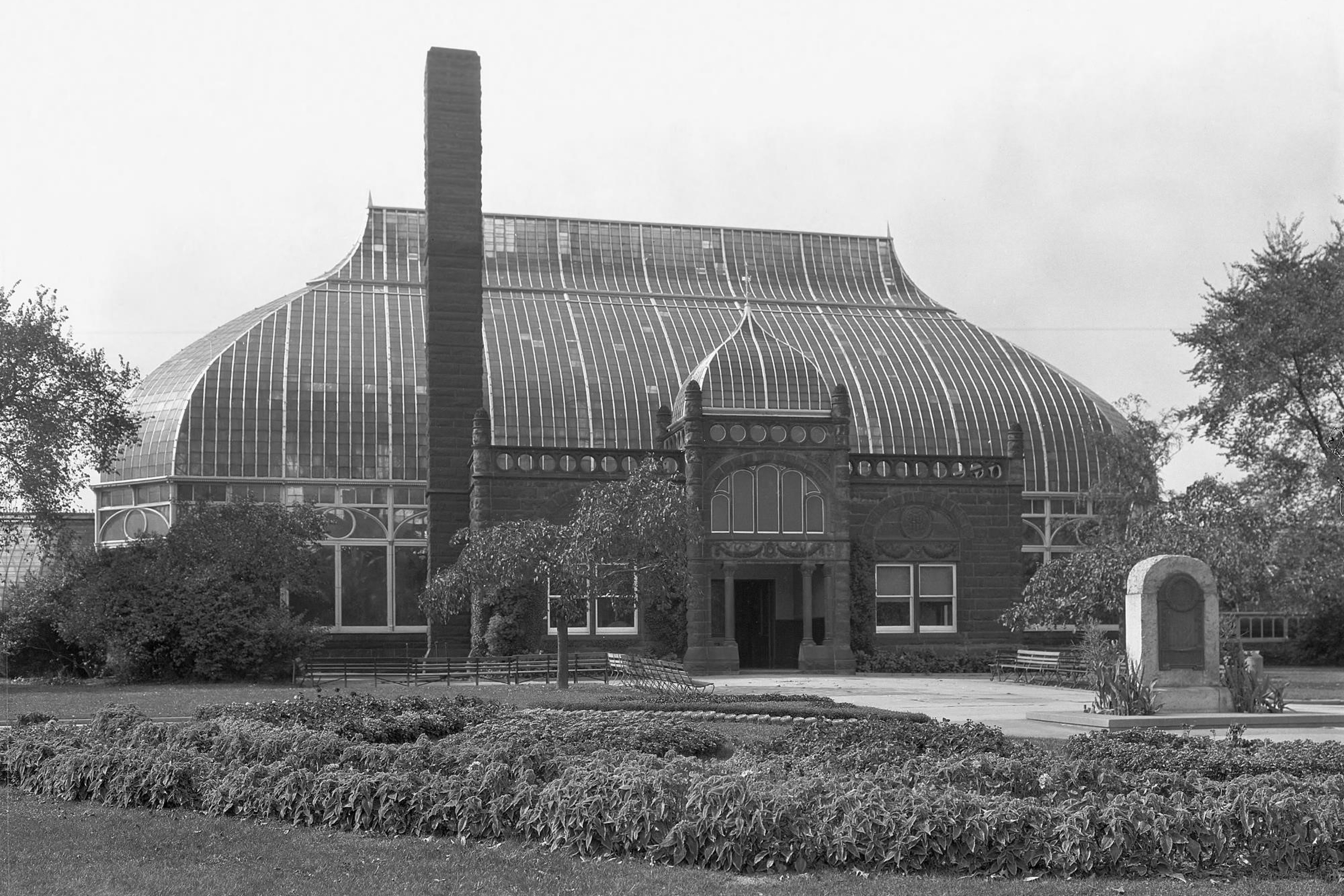 Above: Palm Court as seen in 1932, courtesy of University of Pittsburgh Library system.

In addition to the restoration of historic design elements, new features will enhance the guest experience. Increased ventilation will create a more comfortable atmosphere for our nearly half a million annual guests, and color-changing LED architectural lights will provide a dramatic flair during special events and our beloved annual Winter Flower Show and Light Garden. We hope that you visit to experience history in the making as this exciting project continues and look forward to revealing the beauty that these renovations add to our wonderful conservatory. 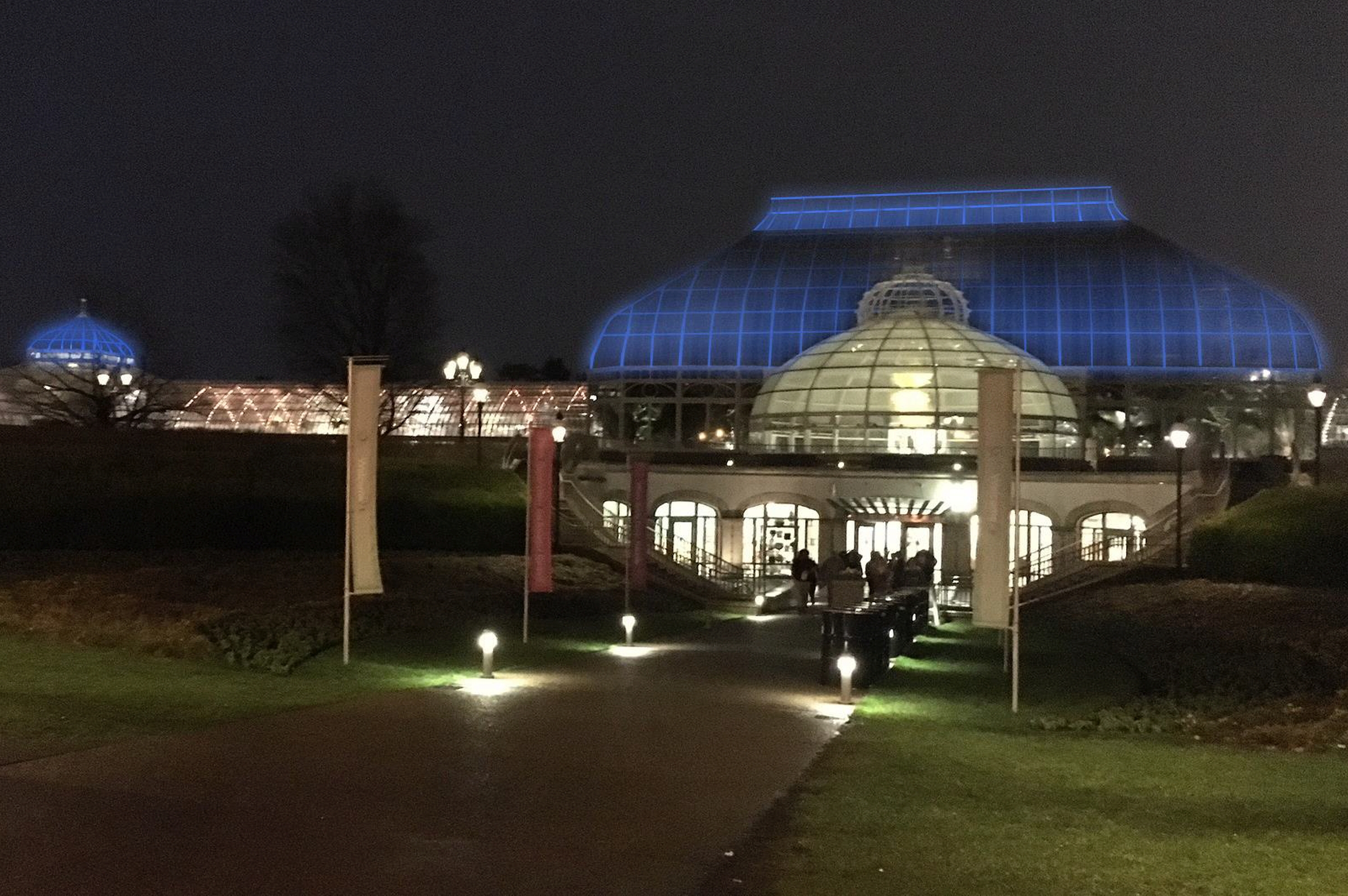 Phipps has also launched a new website allowing the public to sponsor a pane of glass. With sponsorship, you will receive a frameable printed certificate with your pane coordinates, making it possible to locate your selected section in the conservatory. A special opportunity to honor or remember a loved one, donors will also be acknowledged through a special recognition display in Palm Court.. To learn more about the project and how you can take part, visit our Palm Court Restoration website.