Gretchen Goldman, Ph.D. | Research Director for the Center for Science and Democracy at the Union of Concerned Scientists 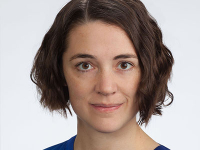 Gretchen Goldman is the research director for the Center for Science and Democracy at the Union of Concerned Scientists. Dr. Goldman leads research efforts on the role of science in public policy, focusing on topics ranging from scientific integrity in government decision-making, to political interference in science-based standards on fossil energy production, climate change, and environmental justice. Previously, Dr. Goldman was a postdoctoral research fellow at the Georgia Institute of Technology, where she worked on statistical modeling of urban air pollution for use in epidemiologic studies of acute human health effects. She holds a Ph.D. and M.S. in environmental engineering from the Georgia Institute of Technology, and a B.S. in atmospheric science from Cornell University. Dr. Goldman has testified before Congress and her words have appeared in Science, Nature, The New York Times, The Washington Post, CNN, BBC, National Public Radio, and MarketPlace. She currently serves on the 500 Women Scientists Leadership Board,  the advisory board of InfluenceMap, and the Air and Climate Public Advisory Committee for the Metropolitan Washington Council of Governments.