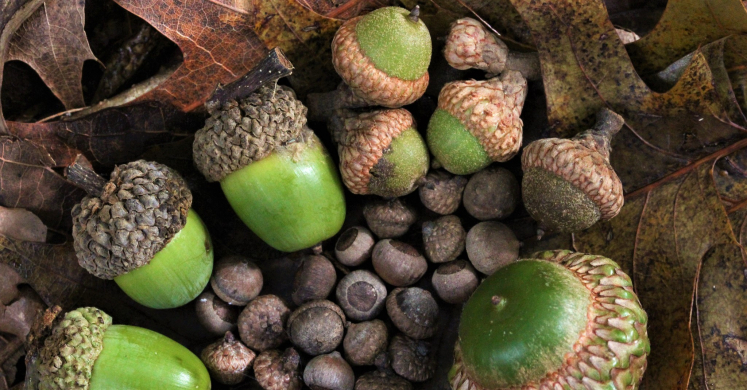 When we think of Thor, the Norse god of thunder, little acorns aren’t necessarily the first thing to come to mind in association with the hammer-wielding, lightning-producing deity. However, variations of old Norse legends tell of Thor getting caught in a storm and seeking shelter under a mighty oak. From then on, oak trees and their associated acorns became sacred to him; that legend spawned acorn lore across Germanic and Nordic peoples. Acorns became associated with good luck, they were noted symbols of patience and it was believed that placing acorns in your windowsill would protect the home from being struck by lightning. Of course, reverence for the oak exists outside early northern European cultures. Today, the oak is the national tree of the United States; and China, which boasts a high diversity of oak species, values the oak for its many uses. Notably for us this time of year, acorns are a symbol of autumn and seasonal change. While they are currently falling in abundance, let’s a learn a bit more about these little nuts that can evoke either dreams of falling leaves and cozy flannel or the thunder of a mighty Norse god!

Acorns are the fruits of oak trees, and the seeds are protected inside the tough shell of the fruit (technically a nut). The inside of an acorn “shell” is typically one large seed. For some species of oak, the acorns won’t sprout for up to 18 months of being in the ground, but acorns of other species will begin sprouting nearly as soon as they fall off the tree!

Most oak species begin producing acorns when they around 20 years old, and they will continue for several decades. Peak acorn production occurs around the ages of 60 to 80 years old, and a tree in peak production can produce as many as 10,000 acorns in one season! A tree’s acorn production, however, varies by year because it is dependent on many factors. In the spring, oak trees produce little bunches of tiny pollen-producing male flowers called catkins that spread pollen to the female flowers (most oaks are monoecious — meaning they have male and female flowers on the same plant). Seasons with unfortunately timed hard frosts can limit the number of flowers that year, thus limiting the number of acorns. Seasons with abundant acorns, however, are quite a feast for wildlife, and our black bears here in Pennsylvania will even delay hibernation in a good acorn year.

Acorns are an important food source for a variety of wildlife, from blue jays to squirrels to bears; but they are indeed edible to humans as well. The trick is to remove the bitter and potentially harmful tannins beforehand. In his book “The Sioux Chef’s Indigenous Kitchen,” Chef Sean Sherman details how to appropriately prepare acorns for some human consumption in different ways, including acorn flour! The Old Farmer’s Almanac also has instructions for trying roasted acorns at home if you’re itching to try something new.

Right now is peak autumn weather, so I hope you have a chance to get outside and check out some acorns produced by oak trees in your area. Hit the trails and keep exploring!

Connecting to the Outdoors Tip: It’s a tricky business in some cases, but oak tree species can be identified by their acorns! Check out this guide to trees of Pennsylvania, and you will notice little differences in the size, shapes, colors and caps of acorns from kinds of oak trees.

Audubon: How to plant an oak tree from an acorn

Tennessee Extension: How Do Acorns Develop?

Love this informative article.  Thank you.