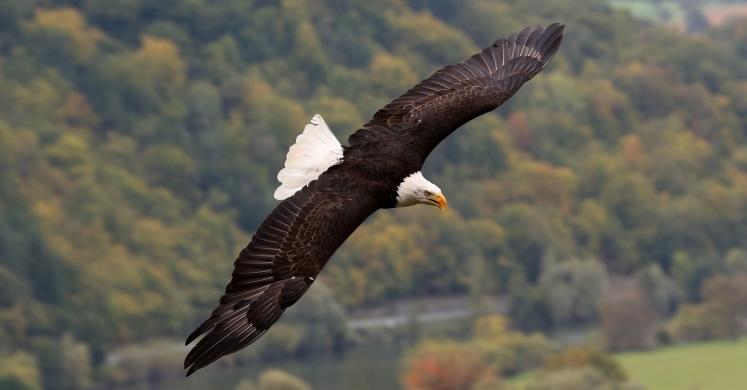 Whenever you hear of bald eagles, you might visualize our nation’s emblem soaring through the forested wilderness of Alaska or along the coastlines of Puget Sound scouring the area for fish. But, did you know that bald eagles (Haliaeetus leucocephalus) can be found all across North America and even right here in the City of Pittsburgh? There are currently three breeding pairs of bald eagles with established nesting territories in the Greater Pittsburgh area in Hays, Harmar and Crescent Township. And just last week Pittsburgh received a special surprise from the nesting pair at Hays, three eggs! The pair welcomed their first egg on February 13th, their second egg on February 16th and their third egg on February 20th. Both the male and female eagle will take turns incubating the eggs and tending to the 5 to 6 foot in diameter nest over a 34 to 36 day incubation period. Did you know that in 1983 there were only 3 bald eagle nests documented in Pennsylvania, but as of 2015 that number has increased to approximately 277 nests? This increase in bald eagle nesting sites and population is not exclusive to Pennsylvania, however. Bald eagle populations had plummeted in the mid-20th century due to the once widely used pesticide dichlorodiphenyltrichloroethane, or DDT, which bioaccumulated in the food chain and ultimately inhibited the eagle’s ability to reproduce. However, thanks to the publication of Silent Spring by Pittsburgh’s own Rachel Carson, the use of DDT was eventually banned, allowing for intensive conservation and reintroduction efforts to significantly increase bald eagle populations across the United States.

Connecting to the Outdoors Tip: If you’d like to catch a glimpse of the Hays eagles, grab a pair of binoculars and head down to the Three Rivers Heritage Bike Trail. With a little patience, you just might catch the white head of an eagle peaking above the edges of the nest, or an egg-sitting exchange as the parents take turns foraging. If you’re an eagle enthusiast or would just like to enjoy observing the eagles from the comfort of your own home or office, you can also catch a livestream of the both the Hays and Harmar nests via the Audubon Society of Western Pennsylvania’s Bald Eagle Webcams. Pittsburghers are very fortunate to live and work in such close proximity to a wide variety of wildlife, which speaks to the environmental health of our city. Always remember to observe wildlife at a safe and respectable distance for their wellbeing as well as your own. If you’d like to see how you size up to an adult bald eagle up-close, drop by the National Aviary and check out their two resident bald eagles, Abby and Liberty! If you have little ones, consider helping them create a life-sized bald eagle or bald eagle nest to show them just how large these birds and their nests can get!

Commenting is not available in this channel entry.

Hi Lorren, my husband and I live near Hays and have done the trail. What a breathtaking sight! Nice job on the blog, take care. Mj.