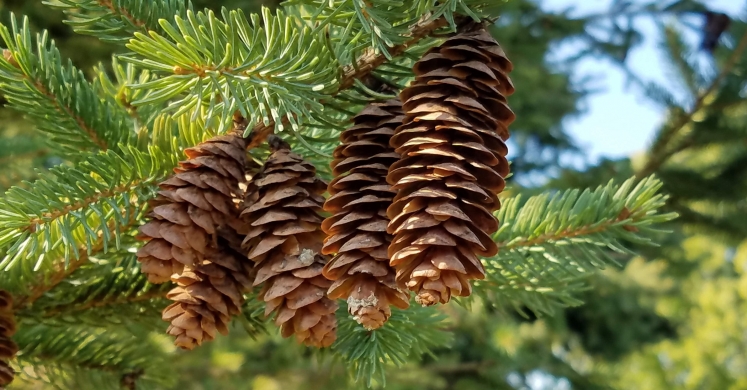 I was tempted to title this post Pine Cones, but more than just pines have cones! These woody little fixtures are produced by a variety of conifers including pines, hemlocks, and spruce (all members of the Gymnosperm plant group, which literally means “naked seed” in reference to their lack of fruit). This time of year, many of us use cones to decorate our homes or add some rustic novelty to a flower bouquet, but cones are absolutely essential to conifers—the cones are their way of producing the next generation! Let’s look a little more closely at these familiar plant materials.

Cones (also called a strobilus or plural strobili) are the reproductive structures of coniferous plants. In most trees, there are pollen-bearing male cones and seed-bearing female cones. The image that popped in your mind for the phrase “pine cone” earlier was probably a female cone. Female cones are larger and their scales are made of tough, woody material that protect the megagametophyte—what we can think of as a conifer “egg” – in their ovules (see below). Male cones, on the other hand, are small and inconspicuous compared to the much larger female cones.

Female (left) and male (right) cones of the Ponderosa pine. The female cones commonly grow 3-6 inches long, while the male cones. If you’re a crafter, the female cones are commonly available for use in different projects. Both images, National Park Service, public domain.

The male cones will release wind-dispersed pollen to a female cone, with any luck. After the female cones are pollinated, a conifer seed develops at the base of the cone’s scale, and the cones mature before seed dispersal. This maturation period can take anywhere from a few months to a few years, depending on the species. 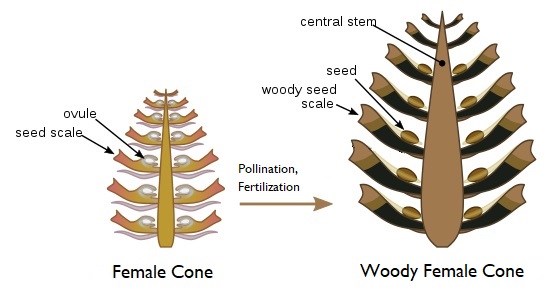 There are approximately 600 species of cone-bearing plants alive today, but conifers have been a resilient group of plants for the last 300 million years. During that time, cones have developed a wide variety of characteristics and adaptations. For example, though many cones are measured in ounces or even fractions of ounces, the heaviest of all the cones comes from the Coulter pine, affectionately dubbed “the widow-maker” as their cones can weigh up to eleven pounds! When it comes to diversity of conifer plant sex, some species of pine trees have either male cones only or female cones only (though most have both.) Cones can also vary in ecology—we’ve heard quite a bit about fire ecology recently—but some cones actually cannot open to release their seeds unless prompted by a wildfire. (It should be noted, though, that climate change is dangerously increasing both the intensity and frequency of forest fires.) Cones of different species also provide a food source for a variety of wildlife such as deer, small mammals and birds in the winter time.

So the next time you’re on a walk outdoors, try to find both male and female cones of the conifers you see, and take note of the variation between species. Nature always leaves us with quite a bit of room to keep exploring!

Connecting to the Outdoors Tip: The DCNR's guide to trees of Pennsylvania is a fantastic resource to help you identify the most common conifers in the state.

Leslie 2011: Predation and protection in the macroevolutionary history of conifer cones