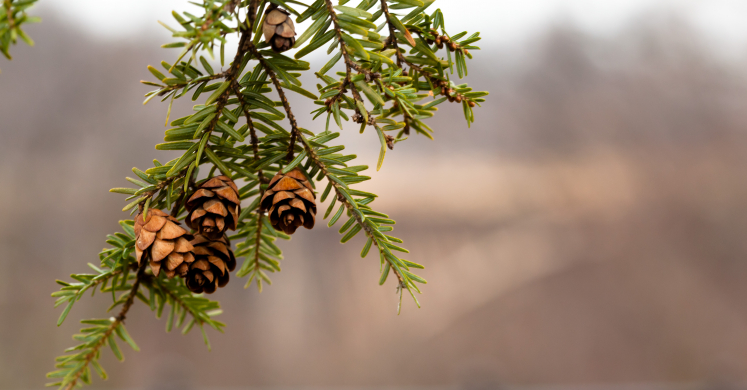 Recently, while going on a hike in park that was not crowded (keep social distancing, folks!), we had the good fortune to come across a little grove of trees notable to Pennsylvanians — our state tree, the Eastern hemlock (Tsuga canadensis). This magnificent conifer has been a fixture in the state for thousands of years, but in the last several decades, the eastern hemlock has been in decline from the introduction of a pest that threatens the species’ survival. Let’s learn more about this state tree and how to protect it, shall we?

Eastern hemlocks are coniferous trees in the Pine family (Pinaceae) and they can grow to be 100-150 feet tall. They are found in the eastern half of North America as far north as Nova Scotia and Ontario in Canada and as far south as Georgia. As conifers, they have needles as leaves and cones to bear seeds and pollen. Oddly enough, though they share a name with poison hemlock, they aren’t closely related – poison hemlocks are actually flowering plants in the carrot family!

These trees are essential to their native communities. Besides playing a role in temperature regulation in forested communities, some bird species such as Blackburnian warblers and black-throated green warblers, show a marked preference for Eastern hemlocks over other types of trees. The presence of eastern hemlocks is associated with higher biodiversity of streams that run along hemlock stands, and even fish communities differ in composition and diversity in waterways through hemlock stands.

Over the last few decades, though, Eastern hemlocks have been struggling against the presence of an invasive Hemlock wooly adelgid – an Asian species accidentally introduced to Virginia in the 1950’s. The adelgid’s take advantage of the trees’ starch storage, and infestations can slowly, over the course of up to ten years, hijack enough nutrients from the tree to kill it. Over the past twenty years, Pennsylvania has employed a number of measures to control the adelgids including introducing a predatory beetle to manage the insects, using pesticides, and replanting different species when a hemlock is removed. Notably, the PA DCNR has also been a part of USDA efforts to breed eastern hemlocks that resistant to the hemlock woolly adelgid. If you do happen to be on a walk at a county or state park and notice an eastern hemlock that is “fuzzy” at the base of needles and branches or a hemlock with dead and graying needles, alert a park manager or ranger to what you spotted.

And if you do spot a gloriously tall eastern hemlock, keep in mind that some of the older specimens have been noted as over 500 years old – ancient giants! 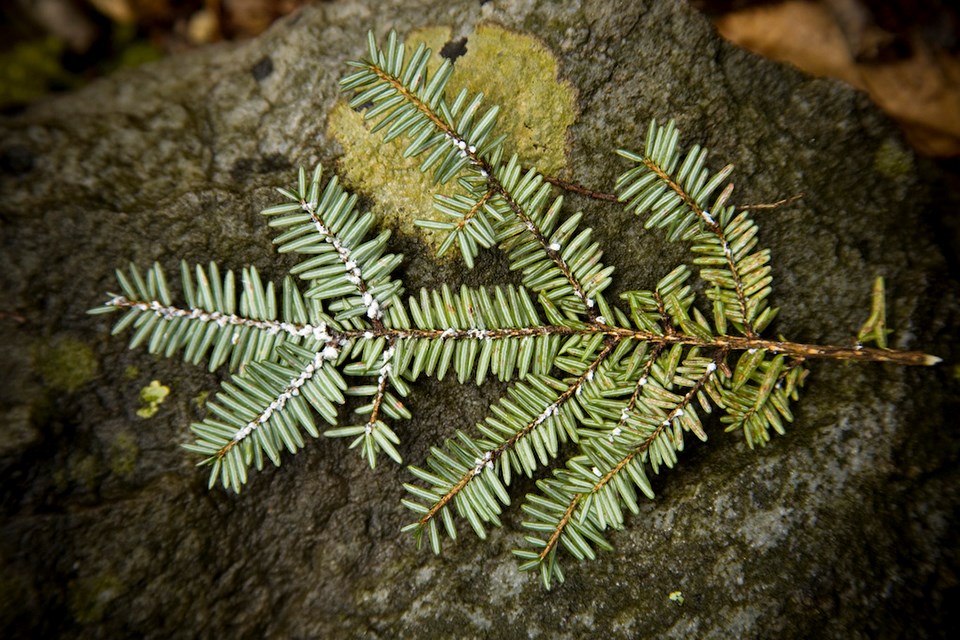 Connecting to the Outdoors Tip: A few parks in the area have eastern hemlocks, but Pleasant Valley Park in Murrysville currently has less foot traffic than some of the city or county parks.

US Forest Service: Eastern hemlock decline in riparian areas from Maine to Alabama

I have a hemlock in my backyard. What happens to a tree infested with the wooly adelgid? Is it treatable, or will the tree have to be destroyed?