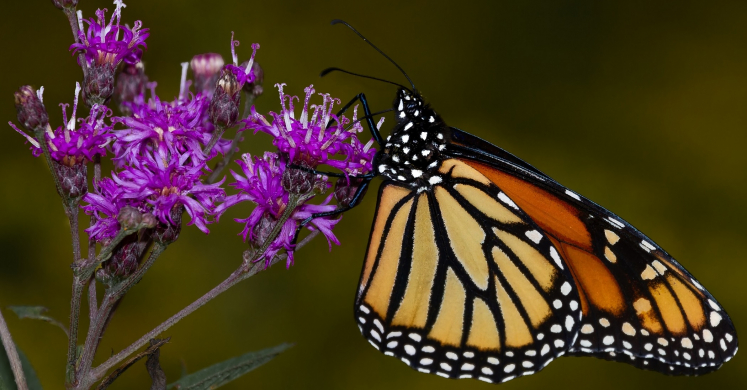 Late August provides one of those last fleeting pops of purple summer color: ironweeds are currently in bloom! We have three species of ironweeds in PA: tall ironweed (Vernonia gigantea), New York ironweed (Vernonia noveboracensis) and the tawny ironweed (Vernonia glauca; the tawny ironweed, though, is exceedingly rare and there are only ten small populations of it known in the state). You have probably seen ironweeds while driving along a highway, or perhaps when going by a field or pasture; while undoubtedly pretty, the name ironweed suggests some grit or resilience that may not be obvious right away. Let’s learn more about this plant named for its toughness, shall we?

Ironweeds are in the Asteraceae family of plants, which makes sense when we look closely at their flowers. Each little “flower” is actually a small flowerhead full of florets — the anatomical flowers. While the flowers may look tiny and delicate, the plant’s tough-talking name references a stem so hard and woody that even grazing cows leave it alone, and a root system so strong that the plant is difficult to remove when unwanted. (Let’s see — tough, resilient, and dedicated to its place? This really is the perfect flower for the Steel City!)

As its name suggests, the tall ironweed, also known in some regions as the giant ironweed, is…very tall. The plant is usually 3‒7 feet tall but can reach up to ten feet in height. The stems and undersides of its leaves are generally covered in short fine hairs — though, notably, hairs may be sparse or absent if the plant is a hybrid with a different ironweed. They can be found in low-laying areas, pastures, and near ponds and other bodies of water; but they are also common along roadsides. 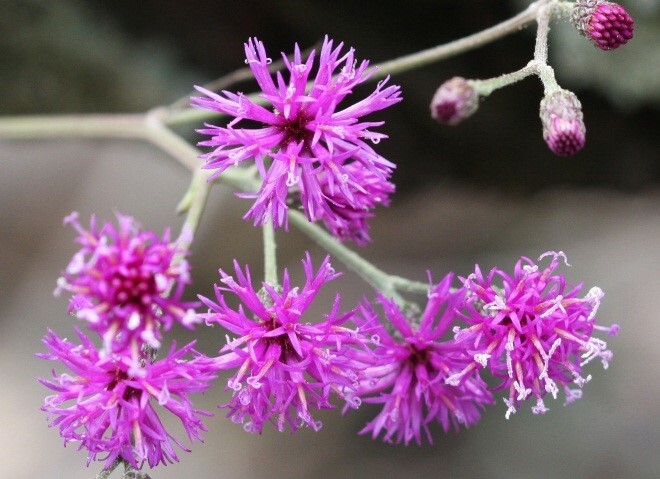 They may not bear a reference to height in their name, but New York ironweed can be quite tall as well! They typically are 3-6 feet tall, though I should note that there is quite a bit of regional variation across ironweeds, meaning they can have some different traits depending on where they are found in their geographical range. In general, New York ironweeds typically have more flowerheads per plant than tall ironweed (New York ironweed may have over 30 flowerheads while tall ironweed usually has 10-30), and they usually are found in wetter soils than tall ironweed (but they manage dry soils quite well when they need to). 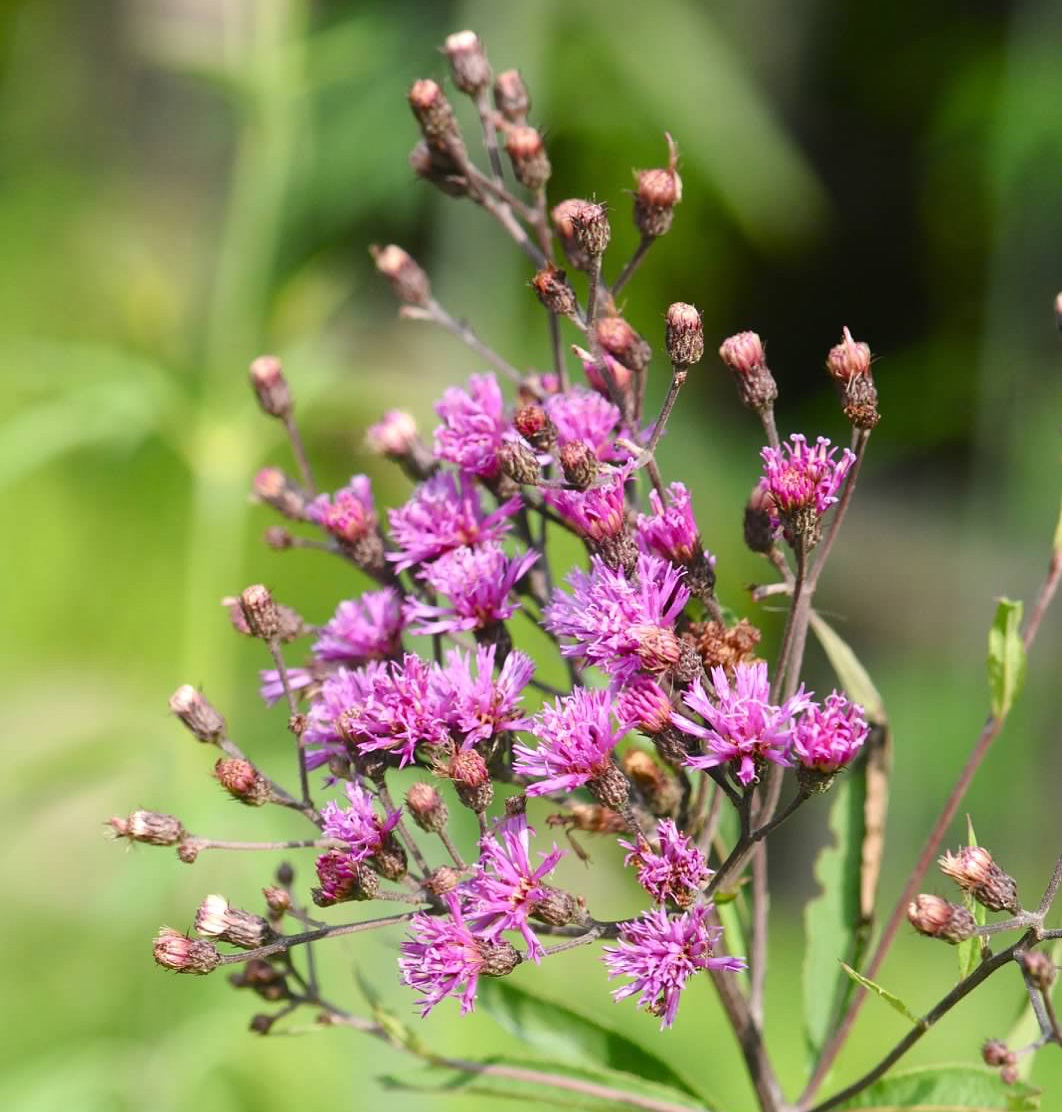 The tawny ironweed “only” grows to be about five feet in height and goes colloquially by a few other names, like Appalachian ironweed and upland ironweed, most likely because it is primarily found in Appalachia. Pennsylvania is the northern-most part of the range, and it can be found as far south as Georgia and as far west as the Mississippi River. It is rare in Pennsylvania but more common in southern states. 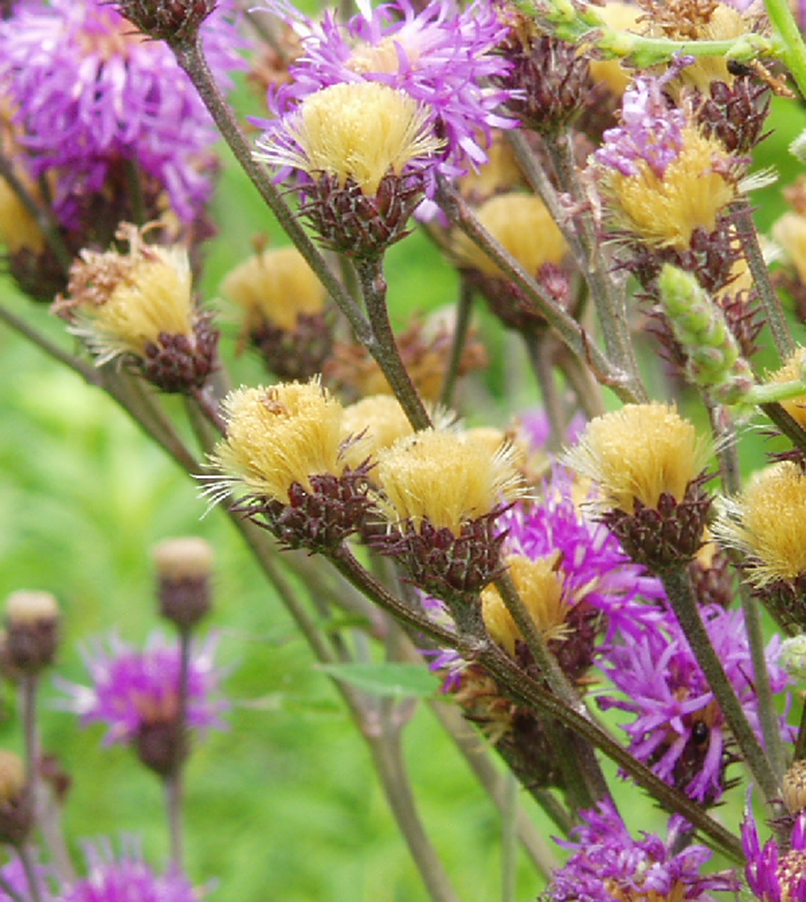 Well now that we know a bit more about those pops of purple as the summer comes to close, I hope you get a chance to enjoy the last of what the season has to offer outdoors — and I promise I’m still holding off on the pumpkin spice!

Outside My Window: Ironweed Up Close