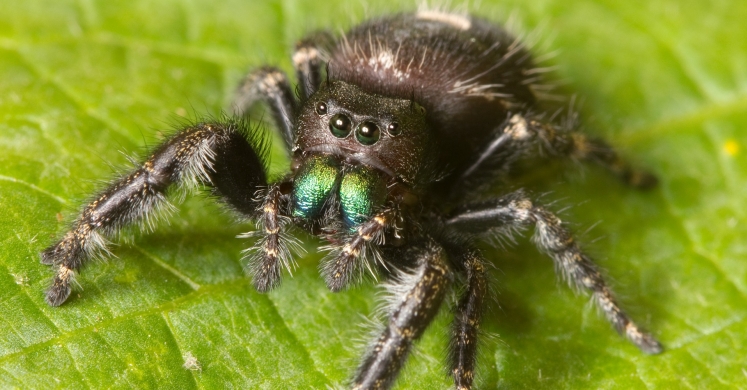 “Oh my gosh, there’s a lot there! Hard to narrow it down!”

There was no mistaking Sebastian Echeverri’s enthusiasm for jumping spiders. He described the spiders’ feats and abilities almost like a proud parent yet still had the wonder of someone awestruck with nature’s innovations. What is it about jumping spiders that captured the attention of this doctoral student at the University of Pittsburgh? Let’s find out!

First of all, what makes jumping spiders different from other spiders? Well, it’s their eponymous talent: jumping spiders jump! They can’t jump the way you or I would, though, given that they lack the musculature we associate with mammals; they do have contractile muscles inside their exoskeletons but no extensor muscles. Instead, jumping spiders use hydrostatic propulsion from their hemolymph (the blood-like fluid inside their exoskeletons) to extend their fourth legs pairs—propelling themselves off the ground. How far can they jump? Depending on the species, it can be as much as 50 times their own body length! If that both impresses you and makes you a bit squeamish, have no fear. Considering many of our local jumping spider species are only around 10 mm long, you don’t have to worry about them going too far.

But jumping isn’t the only thing that sets jumping spiders apart from other spiders. In fact, when we break it down, jumping spiders’ vision emerges as a major evolutionary innovation.

“Jumping spiders have very fine resolution vision,” Echeverri says. “When you account for body size, most animals have much blurrier vision.”

Echeverri explains that high resolution vision is part of the key to a jumping spider’s success. In terms of vision or images, resolution refers to the amount of detail that can be distinguished in the total image. For example, imagine a picture with two tiny dots right next to each other. Plain background, just two simple dots in close proximity. If a viewer looks at the image of the two dots, and then begins taking steps backwards away from the picture, at some point the  viewer will be far enough away from the picture that they can no longer see both dots. They will see only one larger “dot.” This ability to distinguish between two dots, or any two objects, is referred to as resolution. High resolution means you can easily distinguish fine details, even when they are far away —and in the spider science world, high resolution vision is exactly what jumping spiders are known for.

“Even for us, there has to be a noticeable difference in two objects before we can tell the difference in them,” says Echeverri. “{As tiny as they are,} jumping spiders can still find camouflaged prey. They can see their would-be predators. Their primary eyes are the best of any land invertebrate at detail resolution.”  Echeverri goes on to explain that this feat of excellent eyesight isn’t necessarily uncommon, as many large animals have excellent vision; but the mechanics of the actual eye take up space. Large animals have the space for large eyes; spiders have managed to develop great vision in a very tiny space.

In addition, jumping spiders can see ranges of colors that humans cannot, and they are highly adept at detecting motion and distinguishing the details of patterns. On top of that, their lateral eyes effectively give them 360 degrees of vision! And they manage all of this with eyes that are barely millimeters in diameter.

So to reiterate the question, what is the coolest thing about jumping spiders…it really is hard to narrow it down! And if there is still any lingering skepticism about our little arachnid friends, take heart! Most of them prey on insects that we find irritating, like mosquitoes and gnats. Even If we forced a jumping spider to bite us, it would be harmless; and, honestly, these little spiders are much more afraid of us than we are of them.

“To any of these animals, you’re a Goliath. You’re a walking building. They’re going to run away from you as fast as they can!” 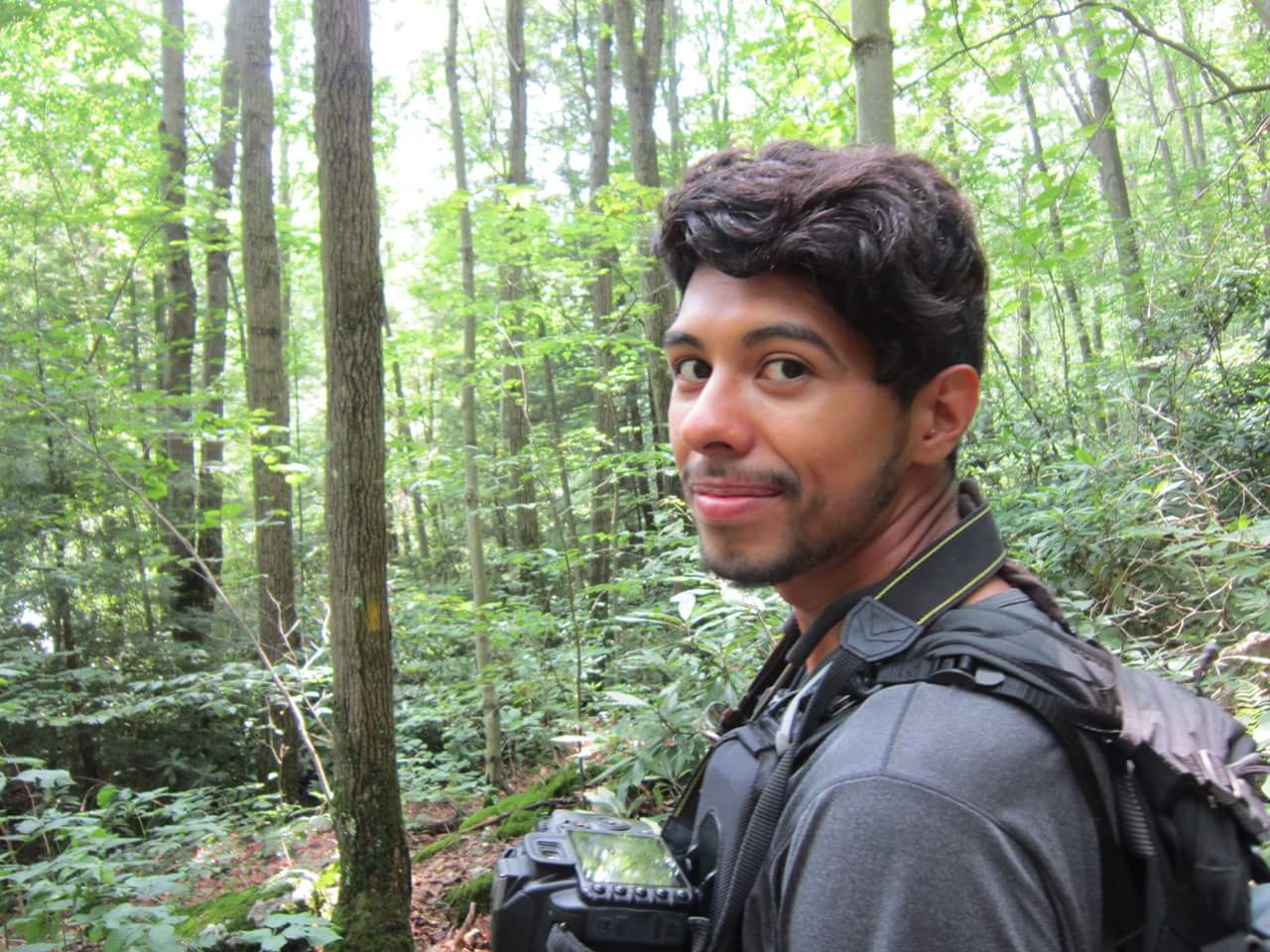 Sebastian Echeverri in the field

Connecting to the Outdoors Tip: Here in Western PA, you’re most likely to see the bold jumping spider (Phidippus audax), a zebra jumping spider (Salticus scenicus), or a number of species from the genera Habronattus or Sitticus. If you’re interested in spotting one, don’t look for a web—these spiders don’t spin webs, but rather craft silken “tents” to hide in. “Check low on walls or rocks near gardens or parks. In the morning, they will sit in the sun to warm up. In more natural habitats, check in leaf litter and low vegetation. Jumping spiders rarely get into trees or taller bushes.”