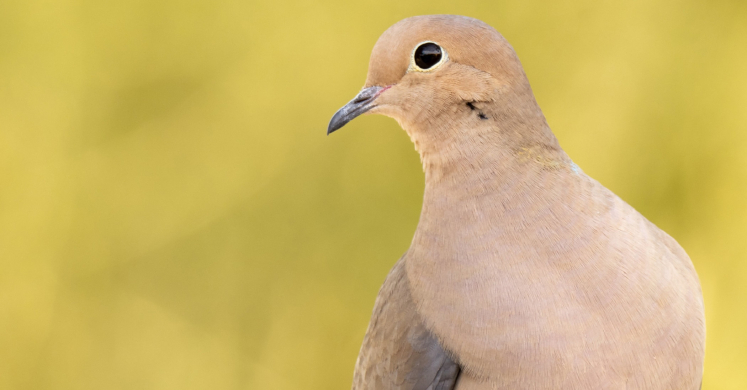 This past week, I’ve had the unique pleasure of watching a juvenile mourning dove on the hillside behind my house. It’s still noticeably smaller than the adult that has been taking care of it, but it has proper feathering rather than the fluff of a nestling, even if the feathers don’t yet have the exact markings and coloration of the adults. The little one is remarkably camouflaged, and my husband and I have both probably stared directly at our avian neighbor without even spotting it – we certainly have heard it, though! If the adult is sitting on the nearby fence or a tree branch, we can hear the adult cooing to this little one, and the little one answers with a prolonged but quiet and high-pitched squeeeeeee. Mourning doves tend to fledge the nest around 15 days old but remain in the care of an adult (most likely dad) for another 7–14 days; thus our friend probably only has about three-weeks experience of what life on Earth is all about. What a learning adventure it is in for! Watching this little bird buddy actually prompted my own learning quest to understand mourning dove biology in better detail. Let’s explore!

You can see the juvenile perched on a thick grapevine stem next to the adult.

Mourning doves (Zenaida macroura) are members of the pigeon and dove family Columbidae. They are seed eaters who can often be found pecking on the ground below a bird feeder. As parents, they make rather untidy, loosely engineered nests that can either be in trees or even on the ground. They tend to lay 1–2 eggs at a time, but they can have multiple broods per year — in warmer, southern states, they may even lay 5–6 clutches in a single breeding season!

If we circle back to my little neighbor, though we’ve spied the adults feeding the fledgling, we haven’t managed to spot what the meal is, but I’m particularly interested in noting whether the young one is still eating something called crop milk. A handful of groups of birds — predominantly some penguins, flamingoes and our doves and pigeons — can produce a “milk” of sorts to feed their offspring. It’s not milk in the mammalian sense, though. Rather than being produced in mammary glands, crop milk is a protein-rich secretion produced by the cells lining the crop, a little food storage “pouch” in the bird’s esophagus. Both male and female mourning doves can produce crop milk to help feed the helpless nestlings. As the chicks mature, they can begin eating some seeds but still benefit from quite literally jamming their own beaks into the back of mom or dad’s throat for a nutrient-packed snack. Typically, once the young approach the age of our backyard juvenile, they have transitioned to the same diets as their parents, meaning our backyard juvenile most likely has already given up the food of its youth. Still, what a fascinating life history trait!

The camouflage is real!

On a more somber note, there is one other thing that comes to mind when I think of mourning doves. Mourning doves are one of the most abundant birds in North America; Cornell Lab of Ornithology lists their US population at around 350 million. As plentiful as they are, though, their population size still pales in comparison to that of their long-gone cousins…the passenger pigeon. It is estimated that between 3 and 5 billion passenger pigeons lived in North America around the time that Europeans began colonizing. Yet by 1914, the entire species was extinct. The cause behind their extinction is simple and heartbreaking: despite being described as “countless” and “infinite in number” by early European explorers, the passenger pigeon was overhunted. Its vast numbers were treated as a golden goose rather than a finite population that needed time to replenish. And that species will never exist again as a result. So the next any of us go bird watching, or even just hiking, let’s all take a moment to appreciate the beauty we have around us and let’s respect that we all can an impact, be it for good or not, on the world around us. Since you’re here learning with me today, I am confident we both want an impact for good — let’s be motivated by that!

Connecting to the Outdoors Tip: Mourning doves are a common bird at backyard feeders - well, below backyard feeders. If you're feeling the birding itch, check out eBird as a way to track the species you have seen and look up real time data about birds around the world!

Audubon Society - Pigeon Milk Is a Nutritious Treat for Chicks