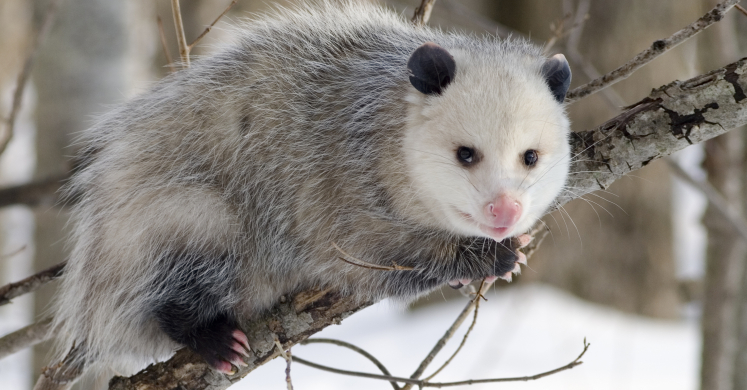 When was the last time you asked someone their favorite animal and they responded with an enthusiastic “opossum!” Off the top of my head, I can’t recall such a moment either, though I’m sure it exists! Granted, with an unsettling hiss, rat-like tail and quirky self-defense mechanism, opossums often are an underappreciated lot, but they really are quite fascinating creatures and highly important in our ecosystems. Let’s learn a bit more about our unique neighbors!

First of all, our local Virginia opossums (Didelphis virginiana) carry the distinction of being North America’s only marsupial. This means that females have a pouch and give birth to highly underdeveloped babies that are about the size of jelly beans, and the babies will finish their development in said pouch. For opossums, this means living about 8-10 weeks in the pouch (actually starting around now, in March) and emerging in late spring. Some female opossums will go on to have a second litter later in the year, usually in May – July.

Another thing that is fascinating about opossums is their bite! Opossums have a bite force of roughly 45 pounds per square inch. By comparison, the average human produces a bite force of approximately 160 pounds per square inch, but remember, little opossums only weigh an average 8 – 15 pounds! Opossums also have 50 teeth, the most of any North American land animal. Would an opossum ever bite a human? Well, anything with a mouth can bite, but an opossum has very little cause to bite you. They don’t want to be that close!

Rather than worrying about their bite, most of us are familiar with opossums’ quirky self-defense act of “playing dead.” This act has a few layers to it, though. As a first line of defense, an opossum will usually simply freeze in place with their head down and eyes open, following the threat. If the threat escalates, opossums may behave aggressively, but if that doesn’t work, then comes the real show: apparent death, also called tonic immobility. Their body stiffens, heart rate drops, breathing slows and they often defecate and drool. Even when touched or investigated by a threat (usually a predator), they don’t move or respond. Their bodies are actually paralyzed. Usually, this is enough to dissuade a hungry predator about the meal. Who wants a stinky, drooly dinner, after all? After the threat has dissipated, the opossum will “wake up” and go back about his day. The truly fascinating part of this behavior is actually involuntary — a reflex to an extreme threat — yet the opossum is at least somewhat conscious throughout the paralysis! When humans experience a similar stress-induced reflex response, we know it as fainting, and we are indeed unconscious for that. Opossums seem to be able to identify when the threat has passed, and only then do they get up.

For all of their quirkiness, though, opossums really are an important part of their habitats. They are omnivores who help keep pest species in check, and of interest to many of us is the fact that they eat ticks — possibly as many as 5,000 ticks per possum per year! Opossums are also unlikely to spread most diseases that we humans fear from wildlife like rabies because their body temperatures are too low.

Connecting to the Outdoors Tip: You can still enjoy the outdoors, even now, as long as you maintain proper social distancing. Avoid touching handrails or other often-handled surfaces in the parks and avoid playgrounds, but nature does us good — whether or not you see an opossum.

Gabrielsen and Smith 1985: Physiological responses associated with feigned death in the American opossum

Alboni and Alboni 2014: Origin and Evolution of the Vasovagal Reflex

#bioPGH Blog: The Secrets of Skulls

I love opossums!  They are fascinating and helpful to humans and their animals, especially the fact that they eat ticks.

My neighbor and I were just talking yesterday about recruiting a band of traveling opossums that we’d rent out to clear properties of ticks, just like people rent out goats to eat brush. Will let you know how it goes.