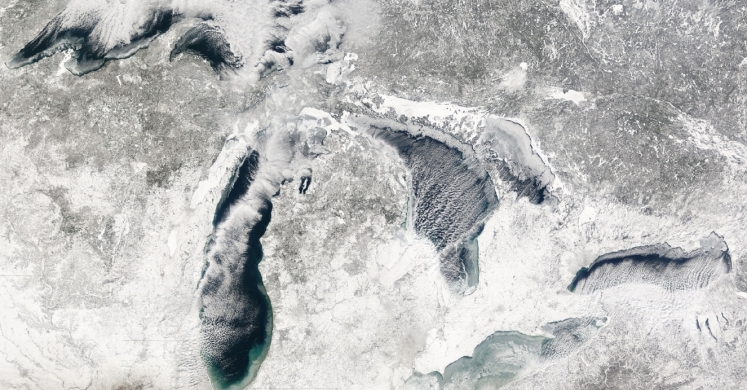 Many Pittsburghers were overjoyed Monday morning to wake up to a winter wonderland. One to two inches of snow around most of the city was more than enough to create a Dickensian feel and provide some sledding fodder! Little more than a hundred miles north of us, though, the snow had also started falling…and it hasn’t stopped. As of post time, Erie, PA, has received 65.1 inches of snow, breaking several of their own already impressive snowfall records. They received 34 inches of snow on Christmas Day alone, which surpassed their previous single-day record of 20 inches set on November 22, 1956. Most of us at some point or other have pointed out that Erie receives “lake-effect” snow, but what exactly does that term mean? And is their latest snow record just usual lake effect snow, or is something else at work? Let’s explore!

First, lake-effect snow is caused when cold air travels far over a warm body of water, like a large lake or stretch of ocean, and this cold air mass accumulates heat and water vapor as it travels, which builds up large clouds. Granted, “warm” is a relative term. Throughout December, the surface temperature of Lake Erie near Buffalo, NY, and Cleveland, OH, averages in the mid-upper thirties (Fahrenheit), but that is still warmer than cold air moving down from Canada. Once this contrast of cold-air-meets-warm-water has built up serious clouds, the resulting precipitation over land is dramatic. Oddly enough, the snowfall event is also often extremely localized, which is part of what makes lake-effect snow so difficult to predict. Multiple inches of snow may fall in a given area, but a neighboring town a few miles away may receive nothing.

This year in particular, though, Lake Erie’s surface temperature was much higher than average this past summer and into fall. Back in October, the Weather Channel (Canada) noted that because of the Great Lakes’ warmer temperature, a heavy lake-effect snow season would be likely, depending on the jet stream’s position. Indeed, late December, the jet stream has been blasting a deep freeze in our part of the continent and –more importantly for our lake-effect snow—has been sending cold wind across a “warm” Lake Erie. Actually, this particular snow event capped off an entire month of snowfall. As of today (Dec. 28), Erie, PA, has received 102.1 inches of snow in December alone, surpassing their previous record of 66.9 inches of snow in a single month set in 1989. And considering snow is still on the forecast for Erie this weekend, that number will probably still go up!

Would it be possible for Pittsburgh to ever see lake-effect snow? Not really. We’re too far away from Lake Erie, and outside of the Great Lakes, the lake-effect phenomenon is most commonly seen in two other places: the Japanese islands Honshu and Hokkaido and the eastern side of the Hudson Bay. These are the locations with just the right water and wind conditions to produce the characteristically intense snowfall of lake-effect snow. To varying extents, lake-effect (or “bay-effect”) snow can also occur on the Baltic Sea, Black Sea, North Sea, and the Great Salt Lake, but without a large body of water nearby (excluding rivers), Pittsburgh will just have to maintain pride in a hockey-induced Iceburgh, rather than a lake-induced snow burg.

Connecting to the Outdoors Tip: We may not have quite the same cold and snow as Erie, but it is still plenty cold! If you have little ones, the next time you are outdoors is a great time to talk about the different ways that animals keep warm in the winter without a parka and gloves. Encourage them to ask questions about blubber, fur, feathers, and (for older children) some animals’ “antifreeze”  or the metabolic benefits of hibernation.

I liked the easy to understand explanation about the lake effect and how the warmer water surface actually creates more snow!