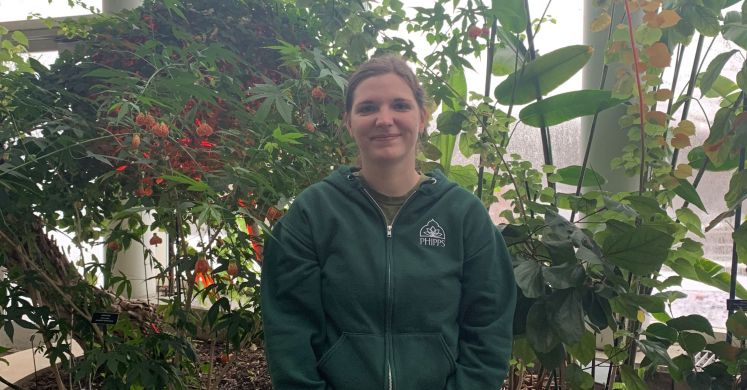 Horticulture is the art or practice of garden cultivation and management. Without horticulture, and the people who are most passionate about it, Phipps would not be what it is today. Phipps takes pride in having elaborate, beautiful and well-kept gardens throughout the conservatory. This would not be possible without the hard-working horticulture team. In this series of profiles, we meet some of the people who make Phipps possible.

Here at Phipps, Braley Burke has been working as our integrated pest management specialist for about a year and a half now! Before starting her adventure here, Braley always had a soft spot for nature. Having grown up on a farm she said, “I caught crayfish in our stream, collected wild blackberries, helped in the garden and popped jewelweed seedpods for fun. Love and awe of nature was certainly imprinted on me at an early age.” It was this love, awe and fascination that would expand into her career!

Braley has a vast number of educational and career experiences working with plants and nature, expanding her diverse background in entomology. She first went to college to obtain an undergraduate degree in environmental protection. It was here that she was drawn to courses that focused on insects, plant diseases and fungi, ultimately leading her to specialize in pest management. While in college, she worked as a shepherd on the university’s organic research farm where she assisted in plant studies and took care of approximately 150 sheep. After her first degree, she spent the summer working in the Black Hills National Forest where she was responsible for hiking the forest and mapping the invasive plant species. She later returned to West Virginia and began working for the West Virginia Department of Agriculture as their pesticide regulatory officer. Eventually she decided to get a master’s degree in entomology, where she worked as a research assistant studying the possible non-target effects of common pesticides on forest soil organisms. She has also taught a few classes on pest management and travelled to South Korea to meet and learn from Korean entomologists!

Even after all this experience, Phipps was one of Braley’s favorite places to visit when she came back to Pittsburgh. After viewing an entomology conference presented by Phipps’ previous IPM specialist where she thought, “that would be an awesome job”, one that she was lucky to get just a little while later after graduating with her master's degree!

Although starting at Phipps was a new challenge for Braley having not been familiar with ornamental or tropical plants, she was quick to catch on and continues to still learn new things! Now Braley works on managing the pests on all the plants in the conservatory rooms, in the greenhouses and outside, constantly being kept on her toes with the plans that can change from day to day and season to season. She will do everything from checking the conservatory daily for any problems, taking care of the butterflies in the summer months, working in the greenhouse pruning out pesty leaves or releasing beneficial insects. When not doing hands on work, Braley can spend a fair amount of time working at her desk where she will diagnose plant issues, research possible new or improved pest management methods or plan classes to keep staff up to date on plant health care. One thing that Braley does that most people wouldn’t know is that she often releases beneficial wasps into the conservatory! She relayed this interesting fact saying “They are tiny and don’t hurt people. Instead, they lay eggs inside of pests like aphids and their “babies” eat the aphids from the inside.”

In her time here, Braley has developed a few favorite things! When it comes to her favorite aspect of working at the conservatory she stated, “First off, plant people are a special group of people, and we all have a great time working together. Secondly, I love working in an environment where I can advocate for beneficial insects instead of solely focusing on pest insects. Insects are mostly beneficial to humans and our environment!”  Along with this she has also shared her favorite plant was the Jimsonweed (Datura stramonium) because, “It blooms at night, has a very weird and threatening seed pod, and it’s poisonous. What’s not to love?”

Braley does some truly fascinating and incredible work here at Phipps, and although we may not always see the work she does on the surface, the health of greenery at Phipps would not be the same without her!

What wonderful insight into a career that few people know about. I spent vacations with Braley at the beach when she was a child and recall her fascination with crabs and fish and all sorts of creepy crawly things. How wonderful that she pursued her passion. Congratulations Braley on finding your dream job. You are awesome!