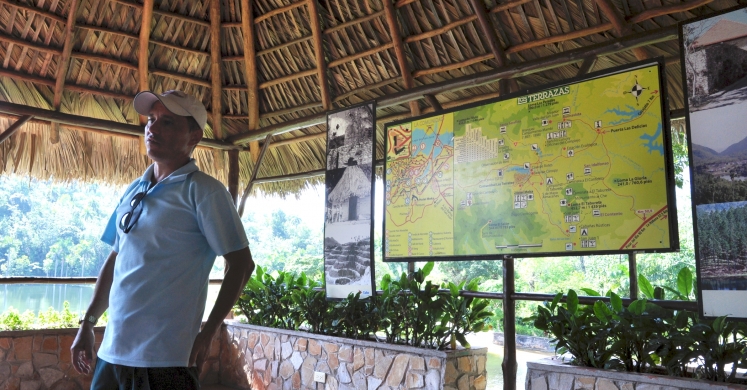 Today we packed up and left Havana to head west to Soroa. Along the way we stopped at Las Terrazas, where we met Daniel, who told us all about the 5,000 hectare reforestation project and community. Las Terrazas, or “the terraces,” refers to the style of terracing that was used as a part of the early settlement coffee plantations, but has since been repopulated with species including the Cuban mahogany, hibiscus tree (local name of Mahagua), Caribbean Pine (Pinus caribaea), teak and African mahogany. 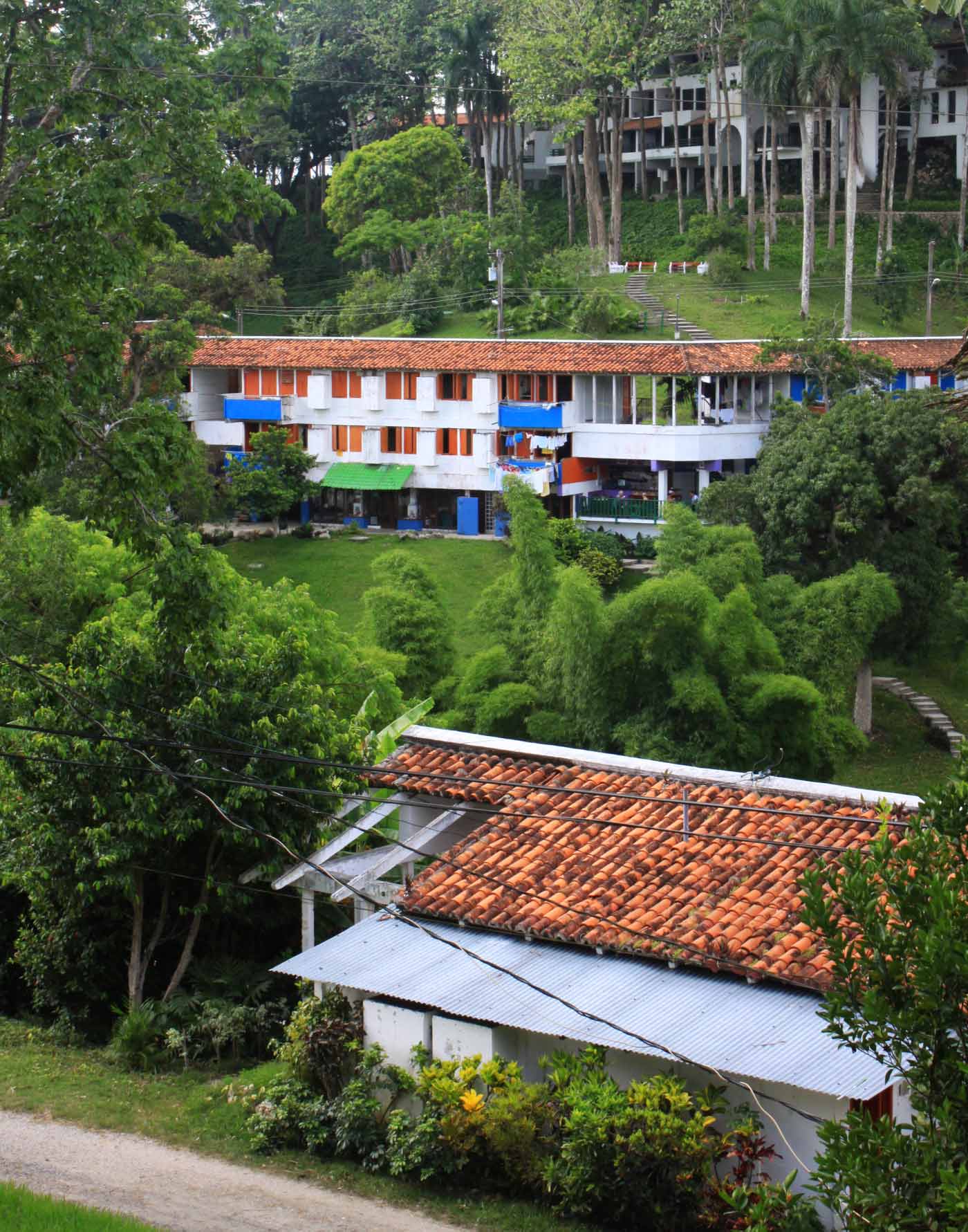 This community and reforestation project became a UNESCO Biosphere reserve in 1985, and was positioned as a location to generate money through “nature tourism”. Initially, Hotel Moka, named after a French coffee plantation, was the main location to serve as the engine for tourism in the region. Since that time, there is now a mixed level or “mixto” school with 270 students, and regular tourists visit the sites. Our group was among several that were being ushered through the introduction, complete with music, to overall discussion of the history, to the driving tour and walking tour of the location. They definitely seem to have the “nature tourism” down to an efficient and effective and interesting system. This community is considered the most authentic eco-resort in Cuba, and the guiding principles include energy efficiency, sustainable agriculture, environmental education, and a sense of harmony between landscapes and buildings. 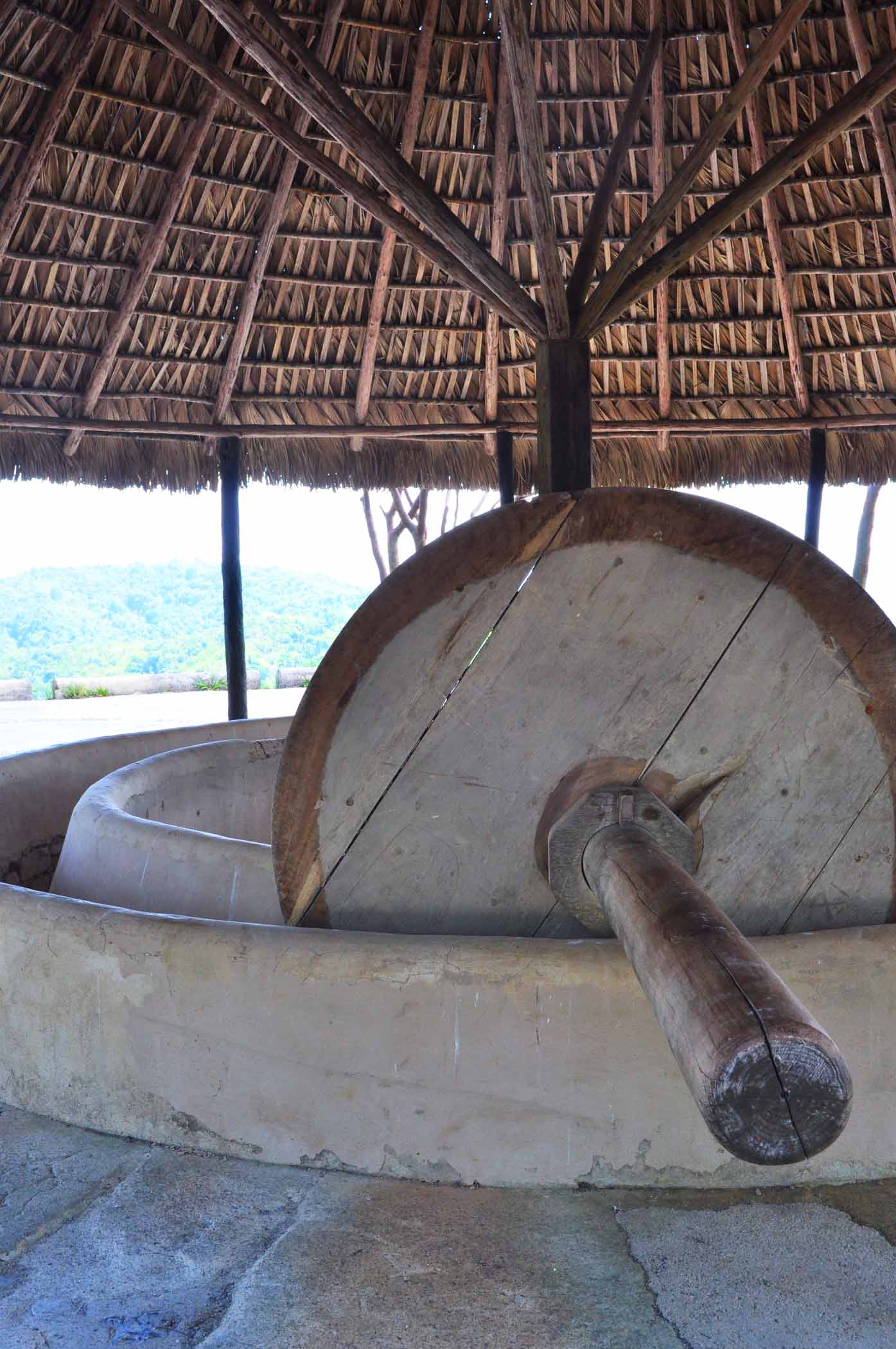 In addition to seeing the location of coffee drying and grinding, we also were fortunate to see some native birds, including the national bird, the Cuban Trogon (Priotelus temnurus), which is beautifully matched to the colors of the Cuban flag (red, white, and blue). We also saw the Cuban Blackbird (Dives atroviolacea). 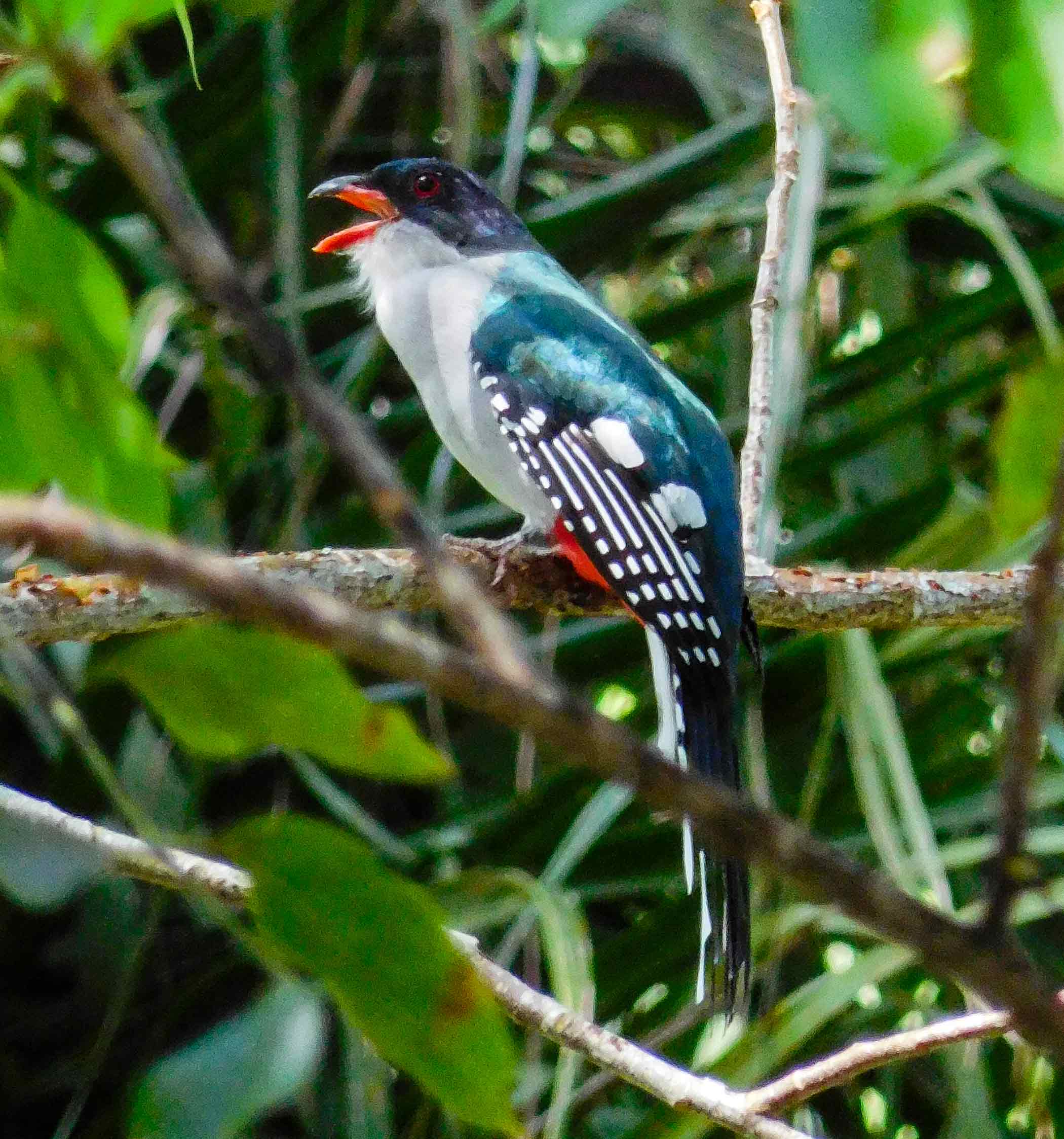 We also saw a white-flowering ginger (Hedychium coronarium) known locally as mariposa, which is the national flower. We learned that this flower was used during the independence war to hide messages in, or women wearing these flowers in their hair indicated they were patriots. 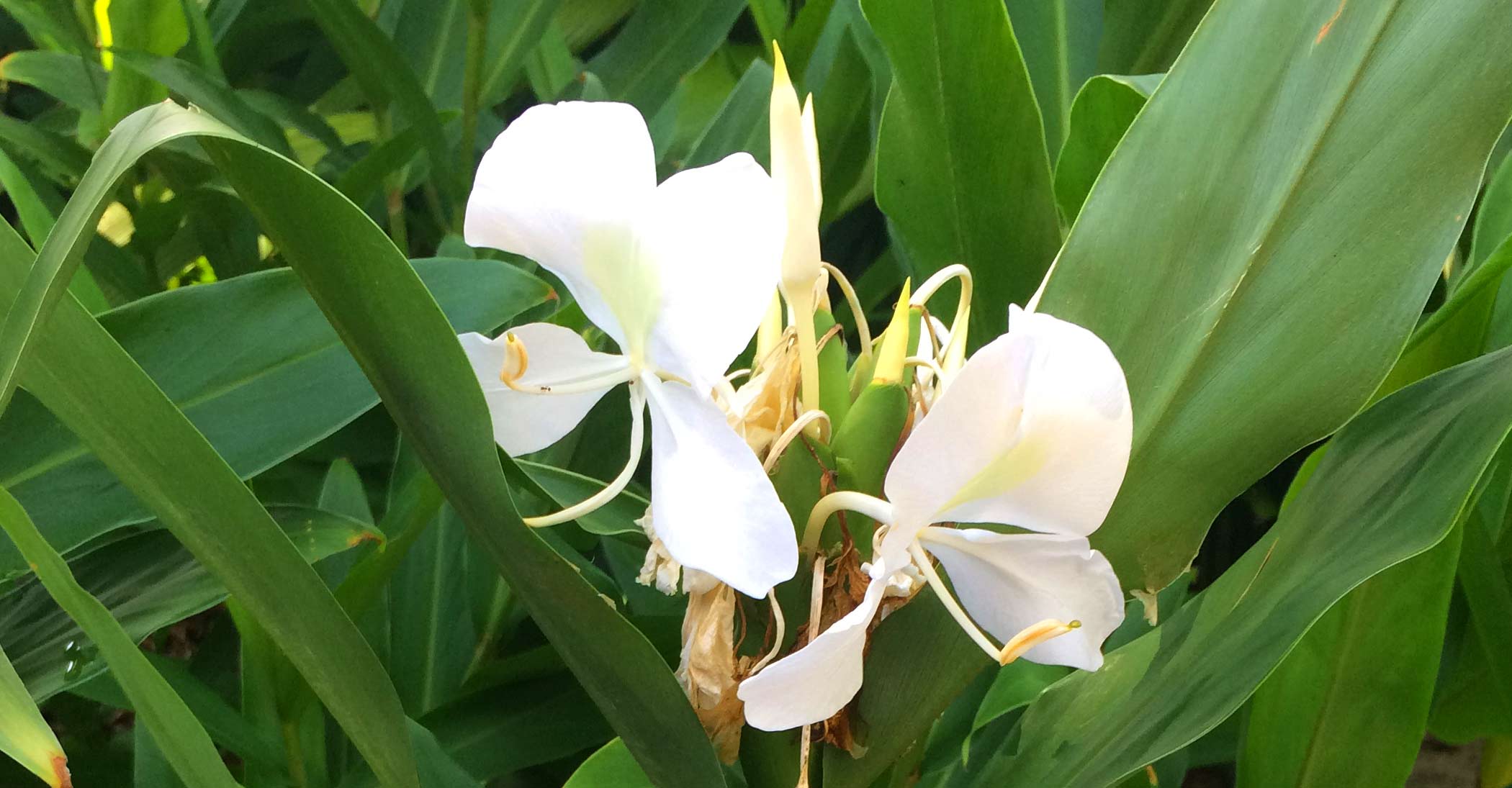 Another tree, Secropea sp., goes by the common name of Che Guevara tree, as he used the flowers to make tea to treat his asthma.  The leaves of this tree are large with a white underside, dark green top, and they were used during the revolution posted out front of homes to signify if the area was all clear (white side) or if the enemy was nearby (dark green side).  It has another local name, the weather tree, as the underside of the leaves are whiter when it is expected to be raining soon.  We were also introduced to mahagua (local name), and hardwood tree with large heart-shaped leaves, and the wood is used to make baseball bats and furniture.

We were then able to sample some coffee and were given four different options, ranging from a cold milkshake style coffee drink, to strait espresso.  This was a nice and refreshing (and invigorating) treat.  From there we went and saw a local artisan, Arial’s studio, where he makes “ecological art” through recycled paper.  Ariel has a process of soaking paper scraps for 3 days in water, then blender, then sifted through a filter, then pressed to remove water, then hung in the sun, then cut to different sizes, and he will continue the cycle indefinitely to not waste paper.  He then includes beautiful prints of local flora and fauna (as lithographs using natural dyes like beets, saffron, and bamboo), on cards made out of the paper, along with pictures and journals.  He also makes small wooden crafts out of scrap mahogany. 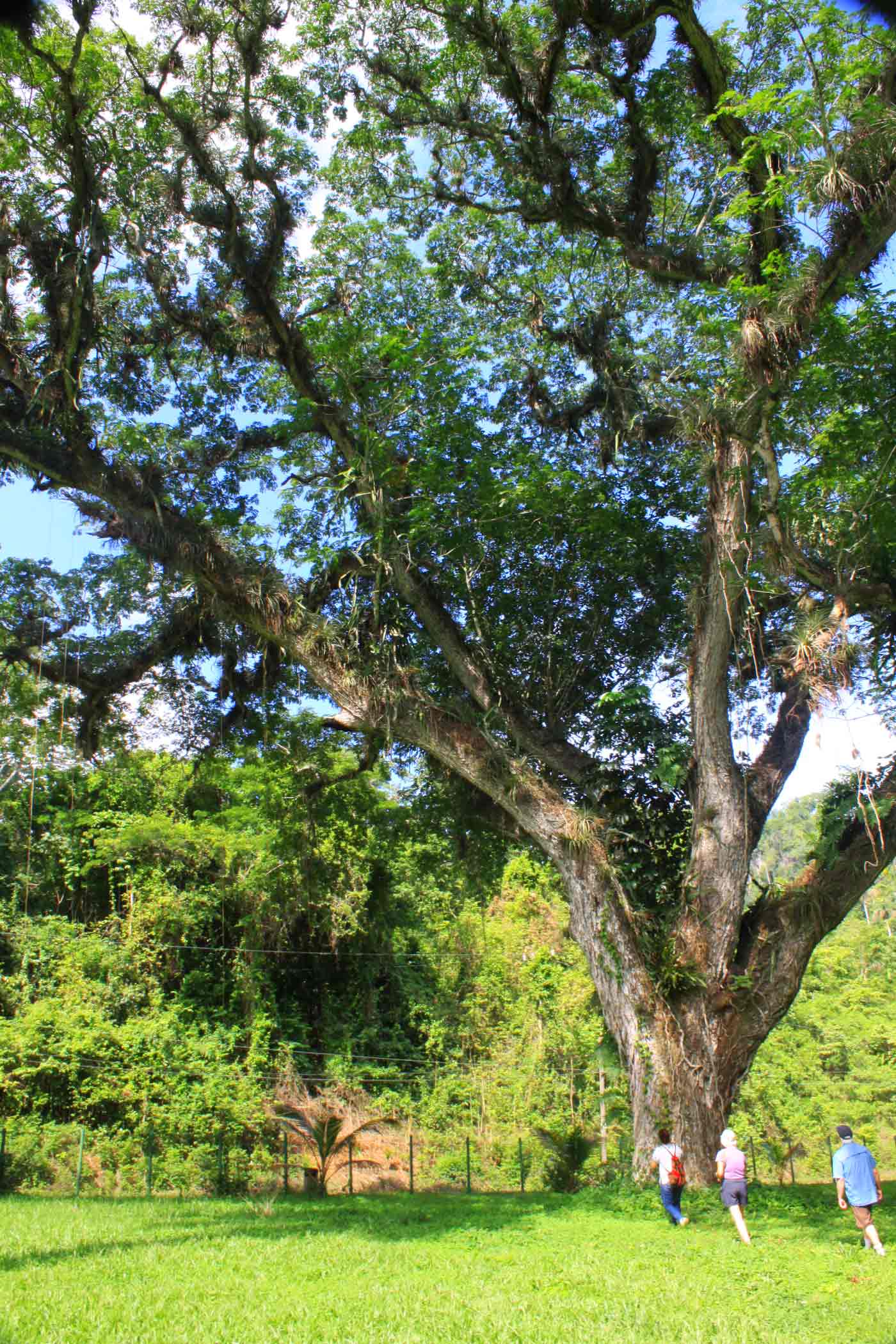 In the late afternoon we arrived in Soroa and were treated to a guided walk by Lucia, the agronomist accompanying us on the tour, and were able to see a variety of plants and animals including woodpeckers, anoles, bamboo, Piper, cactus, tree ferns, and a beautiful, large Samanea samon, which had all sorts of epiphytes growing on it.