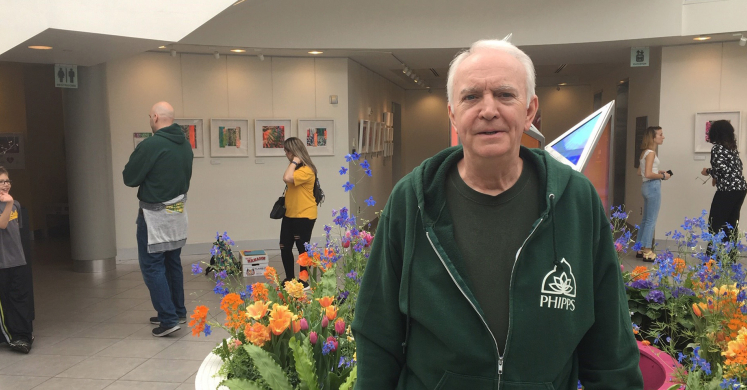 Phipps is well-known for our beautiful gardens, seasonal flower shows, pioneering sustainability initiatives, informative educational programs and community outreach. None of our work, however, would be possible without the knowledge and dedication of our volunteers. In this series of profiles, we meet some of the people who give their time to make Phipps possible.

Dave Lance has volunteered at Phipps for over two years. One of the main reasons he started volunteering was to gain knowledge that would help him and his wife to build a backyard greenhouse of their own. “I was taking some classes here, and the instructor mentioned volunteer opportunities,” says Dave. He now works every Monday doing various planting jobs and clean up, but his favorite thing to help with is seasonal flower show installs. “It’s tons of work, but it’s so satisfying to see the end result. Every single show is different,” he says.

Dave was raised in the South Hills and attended school in Pittsburgh. A huge turning point in his life was when he moved to Southeast Asia and lived there for 13 years for his job at a consulting firm. “I worked in 11 different countries and explored different cultures,” he says. For the most part, he stayed in Singapore and Indonesia. His travels piqued his interest in tropical plants because he got to see “beautiful, lush, tropical things growing wild over there.” His years abroad were eye-opening and changed him for the better. “If I had traveled there when I was younger,” he says, “I probably wouldn’t have come back!”

Back in Pittsburgh, Dave is happy to have his plant refuge at Phipps. For him, the best part of volunteering is the happy atmosphere. “When you work with plants all the time, you can’t help but be in a good mood.” He likes checking in with other volunteers. “Everyone’s happy to be here,” he says, “and you can feel that.”

In the future, Dave plans to continue volunteering at Phipps, even as he gets more serious about his own greenhouse project. He and his wife, a gardener herself, plan to grow a variety of exotic plants as well as some vegetables and fruits to eat. In his spare time, Dave has also volunteers at other places in Pittsburgh, like Habitat for Humanity in Washington County and his local Rotary Club.