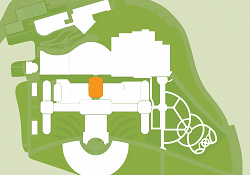 The South Conservatory is often the focal point of our seasonal flower shows. During fall and winter months, this grand display room transforms into the popular Garden Railroad, where you can watch miniature trains wind through the exhibit’s peaks and valleys. Erected between 1896 and '97 as a gift from Henry Phipps, it was the first addition to be made to the original glasshouse. While it was initially constructed as one large room, the South Conservatory, once called the Economic Room, was remodeled in the 1930s, and partitions were added to divide the area into three. The two additions, which have taken on different names and forms through the years, have become our Gallery Room and Tropical Fruit and Spice Room.